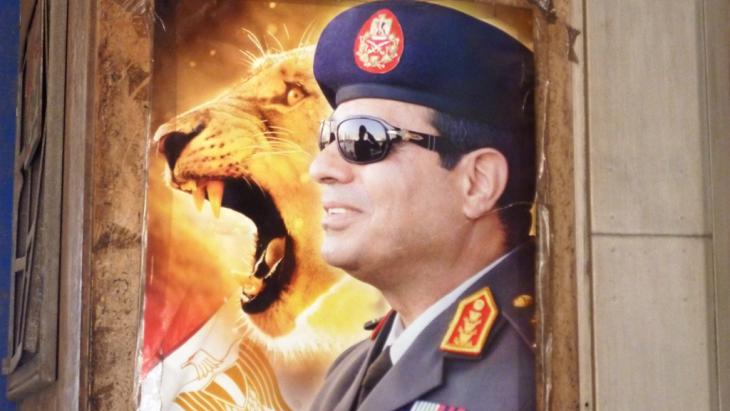 Sisi and the European Union

The long arm of the dictator

From the very outset, Egypt's President Sisi has pursued policies of exclusion and polarisation. It is time for the EU to hold him to account and ensure that any aid granted is made contingent upon political inclusion and better governance, say Stephan Roll and Lars Brozus

When Egyptian President Abdul Fattah al-Sisi took office two years ago it was with promises of greater security, stability, economic progress and social justice for his country. Yet now, halfway through his term, the country is in a worse state than ever. Police violence and state repression against civil society and political opposition have grown.

The number of terrorist attacks reflects the ever increasing degree of radicalisation. Tourism, which is crucially important to the country's economy, has collapsed due to the lack of security. The large-scale economic projects backed by Sisi may have benefited his supporters, but they have had little positive impact for the wider population. Egyptian society is becoming increasingly divided and unstable.

The explanation often given for this state of affairs is that government institutions – whether involved in security, justice or the economy – are both unable to cope and tend to operate as a law unto themselves. This being the case, any impetus for reform from the top will either be inadequately implemented or blocked completely at an institutional level. 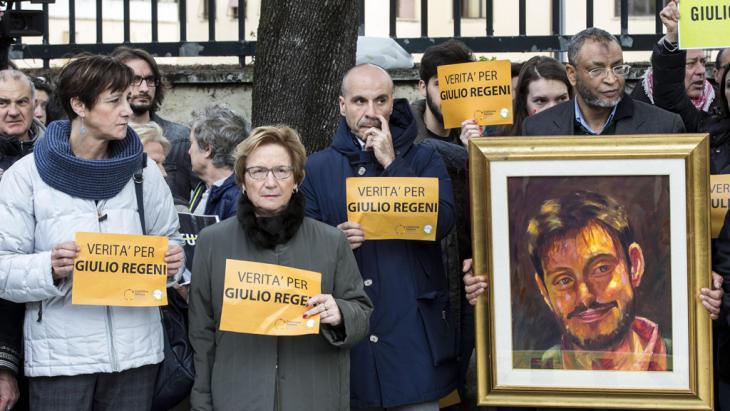 Grief over the murdered Italian student: 28-year-old Giulio Regeni, who was conducting doctoral research into the Egyptian union movement, is believed to have been tortured to death. His corpse was discovered in a ditch on the outskirts of Cairo at the beginning of February. Security forces are suspected to be behind Regeni′s death

The case of the brutal murder of Italian student Giulio Regeni is often cited as proof of this theory. Regeni, who had been involved in research into the role of the country's independent trade unions, disappeared in Cairo at the end of January. His mutilated body, discovered nine days later, showed he had been subjected to brutal torture. Many national and international observers have since come to the conclusion that Regeni was most likely murdered by the Egyptian security services, without the authorisation, maybe even without the knowledge, of the political leadership.

The dysfunctional state explanation is one that Egypt's rulers are happy to play along with. "Nobody is perfect" has become a favourite retort of Egyptian diplomats whenever allegations of human rights violations, misgovernment or corruption are raised by their western counterparts. The concession of admitting the "need for reform" of dysfunctional institutions has proved particularly useful when it comes to encouraging international donors to provide funding for aid programmes.

The argument that blames everything on weak institutions does not hold water however: from the very outset, Sisi's policies have been geared towards exclusion and polarisation. Back in 2013, demonstrations by supporters of the ousted President Morsi were brutally put down on the orders of Sisi, who was then head of the armed forces – hundreds were killed and the divisions within Egyptian society deepened.

When he became president, Sisi set about doing everything in his power to legalise excessive police violence and acts of repression against civil society. In the absence of a parliament, he introduced legislation that would provide the framework for an extremely restrictive political regime.

He also put economic mechanisms in place to enable him to complete an array of controversial mega projects, such as the hugely expensive Suez Canal extension and the construction of Egypt's first nuclear power plant. His often articulated vision of unrestricted state sovereignty has more than a touch of the totalitarian. 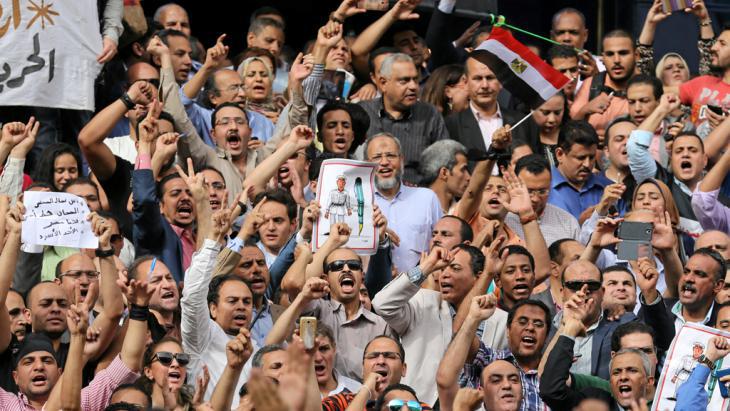 Egypt′s free press and human rights activists are feeling the regime′s iron grip: "The clearest development in the country at the present time, however, is the growing unrest. Demonstrations against Sisi's policies, against police violence and state despotism, are no longer confined to human rights campaigners and political activists. Recent demonstrations have also seen groups such as doctors and journalists taking to the streets," write Stephan Roll and Lars Brozus

It is unlikely that every action of the executive can be traced back to a directive from the presidential palace; there is no doubt however that Sisi has consciously imposed a political framework that shapes any action taken by the state.

EU must distance itself from Sisi

Given the policies he has pursued to date, Sisi's assertion that he wants to change Egypt for the better lacks credibility. On a wave of euphoric mass support, he had the chance to introduce reforms when he came to power. Now, after three years in the saddle, first as head of the armed forces, then as president, that chance appears to have been passed up.

International aid for Sisi can only ever be justified when there are clear indications that the president has the will and desire to pursue a change of course. Rather than just blindly coupling aid to the person of the president, it should be made dependent on actual developments in Egypt.

The clearest development in the country at the present time, however, is the growing unrest. Demonstrations against Sisi's policies, against police violence and state despotism, are no longer confined to human rights campaigners and political activists. Recent demonstrations have also seen groups such as doctors and journalists taking to the streets. Any realistic policy decisions with regard to Egypt must be cognisant of the fact that Sisi's policies are likely to further exacerbate the political, economic and social situation in the country. Criticism has to be clear and specific; rather than remaining a matter for backroom debate, it needs to find its way onto the agenda of international forums such as the UN Human Rights Council. 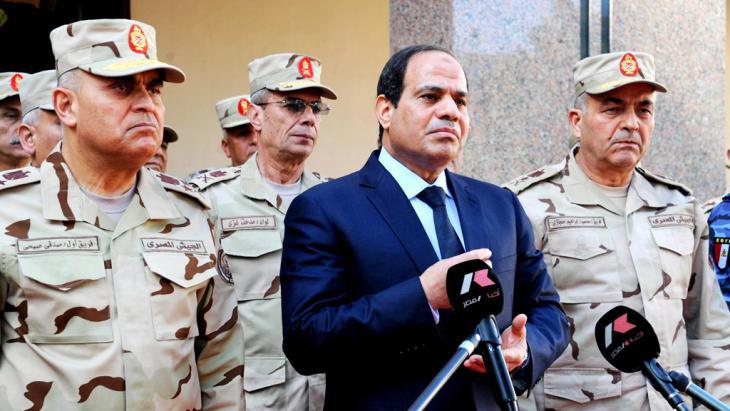 Help for Egypt′s dictator: Amnesty International accuses numerous EU countries of continuing to supply Egypt with arms and munitions despite having reached a fundamental decision to suspend such sales. According to Amnesty, 12 of the 28 EU member states, Germany included, have supplied weapons to the North African country in recent years. Last year, according to provisional data, Germany approved arms exports totalling around 19 million euros

It was there two years ago, that Germany and other EU countries voiced strong criticism of the deteriorating human rights situation in Egypt. The next meeting in June offers an opportunity to build on that and increase pressure on the Egyptian government.

In addition, the EU should make it clear that it holds Sisi directly accountable for the situation and publicly distance itself from him. This would help to make it clear to the regime that there needs to be a change in both political direction and leadership. The international backing given to Sisi is making it more difficult for critics inside the regime – though they are already making themselves heard – to change things and find a new and less compromised leader.

European policy must attempt to frame the necessary support for Egypt in such a way that it does not contribute to an external legitimisation of a president incapable of uniting his country. It needs to signal Europe's willingness to give its full support to a fresh start, to political inclusion and to better governance. However any notion that such a fresh start might be attainable under President Sisi is unrealistic – the recent escalation in Egypt has rendered him persona non grata.

It would make sense in these circumstances for Europe to noticeably reduce co-operation with him. Such a move would, first and foremost, avoid the symbolic approval that state visits or publicly expressed approval for his policies confers upon him. These policies, after all, have thus far only succeeded in leading Egypt ever deeper into crisis.

Lars Brozus is a senior researcher at the German Institute for International and Security Affairs (SWP) in Berlin. He is an expert on authoritarian regimes. Stephan Roll is also a member of the SWPs research division; his area of expertise is Egypt. The Institute advises the German government in all foreign and security policy matters.

In her documentary, the young Palestinian filmmaker Samaher al-Qadi gives us a passionate and very personal view of what it means to be an Arab woman. Her film explores the ... END_OF_DOCUMENT_TOKEN_TO_BE_REPLACED

For years the Arab intellectual elite looked to Lebanon, coveting its atmosphere of freedom. Feigning the non-existence of repression, Beirut welcomed intellectuals from across ... END_OF_DOCUMENT_TOKEN_TO_BE_REPLACED

EU parliamentarian Dietmar Koester criticises the Union's failure to speak up when faced with human rights abuses committed by its Middle Eastern allies, while pointing out that ... END_OF_DOCUMENT_TOKEN_TO_BE_REPLACED

Ten years after Egypt's January 25 revolution, many of those who led protests are either disillusioned or in jail. ... END_OF_DOCUMENT_TOKEN_TO_BE_REPLACED

Egypt has never been called to account for the murder of Giulio Regeni, nor for the numerous human rights violations committed by the Sisi regime. Focusing only on stability, ... END_OF_DOCUMENT_TOKEN_TO_BE_REPLACED
Author:
Stephan Roll und Lars Brozus
Date:
Mail:
Send via mail

END_OF_DOCUMENT_TOKEN_TO_BE_REPLACED
Social media
and networks
Subscribe to our
newsletter