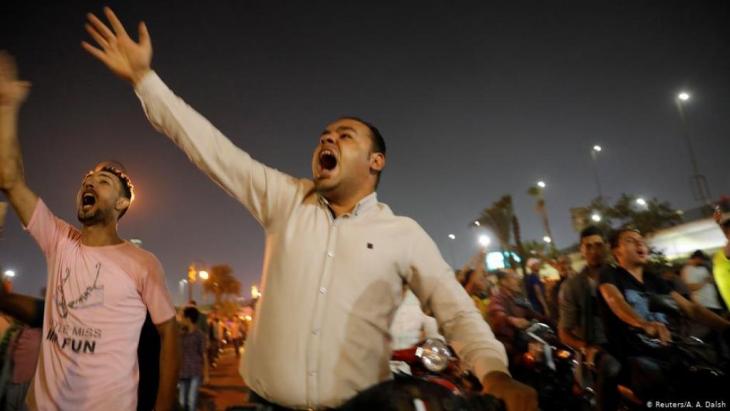 Sisi's rivals or the Muslim Brotherhood

Who is behind Egypt's protests?

Egyptian President Abdul Fattah al-Sisi has suggested Islamists are behind rare recent anti-government protests. But is that just a deflection from the underlying factors fuelling unrest in the country?

Fears of a crackdown amid a "million man march" planned for Friday in Egypt could sound like an exact repeat of the uprising that shook the country in 2011 and eventually led to the installment of the very autocrat, President Abdul Fattah al-Sisi, who has threatened to crush the new movement.

But in a country where any kind of public dissent has been stamped-out since the former general came to power in 2013, last weekend's demonstrations have taken the country by surprise, not least because they had broken a barrier of fear.

“People want the downfall of the regime.” pic.twitter.com/h6hjI9iWkw

By Thursday at least 1,900 people had been arrested since protesters took to streets in cities around Egypt on September 20, demanding Sisi's ousting and an end to corruption within the military state.

Gamal Eid, head of the Arab Network for Human Rights Information, told Reuters the arrests had been "the most violent campaign in Egypt's history."

What is behind the protests?

State media first attempted to play down the demonstrations, but the spread of videos posted on social media forced the government to change tack.

After dismissing the allegations as "sheer lies" at the United Nations General Assembly this week, Sisi accused the Muslim Brotherhood (MB), in a veiled reference to political Islam, and hostile countries of plotting to destabilise the state.

In blaming political Islam for Egypt's protests, Sisi is using the same old card all Egypt's authoritarian leaders used before. He is a troubled liar & deceptive. Protests r about freedom & justice not about Islam or the MB.https://t.co/TYWjroFDgY pic.twitter.com/r4hoJZp5Mw

The Muslim Brotherhood or an internal rift?

Once a major player in the 2011 revolution, the MB has since been labelled a "terror organisation" by Sisi's government, but observers say the allegations are a deflection as the organisation is a spent force.

"There's very little or no indication that the Brotherhood within Egypt has any sort of capability to organise on such a scale," said David Butter, an associate fellow at Chatham House.

"Social media activists from outside Egypt who applauded the action might be trying to take some credit, but nothing suggests the Brothers have any involvement at all," Butter said.

Stephan Roll, Head of Research at the German Institute for International and Security Affairs, said internal divisions and the jailing of their membership means that while some former MB members may be involved, a more likely scenario involves support for the protests inside the ruling elite.

"I think [Mohamed Ali] is not a lone wolf, there must be a structure somehow," Roll said.

Although senior members of liberal parties such as al-Dustour and Istiqlal have also been rounded up in the latest arrests, Roll points to grievances stemming from Sisi's attempt to bring the previously powerful General Intelligence Services under the military's command.

Authorities didn't only arrest 2,000 ppl & threatened more, they also shut down 3 major subway stations downtown Cairo & most streets from/to iconic Tahrir Square. Then Sisi will lecture us about how much Egyptians love him. If you're not frightened to death, why u do this? pic.twitter.com/hllgxHZ4ZU

However, other observers stress that increasing economic hardship due to inflation and a rising rate of poverty has been a driving force.

"Broad swathes of the population have undergone a fall in their living standards over the last two or three years. That's really the biggest issue," Butter said.

The profiles of those arrested also point to genuine anger and frustration rather than ideological differences, with many of those jailed too young to have been fully involved in the 2011 protests.

"There is a whole cluster of grievances which have been bubbling under the surface on many issues that are being given some sort of coherence and direction by the videos released by Mohamed Ali," Butter said.

Will Sisi step down?

Sisi has repeatedly shown Egyptians he won't tolerate any dissent and will not back down in the face of protests.

Central Cairo is heavily guarded ahead of protests planned for Friday and reports indicate social media sites are being restricted.

But as long as Egyptians' economic situation remains the same, protesters have shown this "can happen again every day in the future," Roll said.

"Even if this episode doesn't develop into a movement on the scale of some of the previous ones, it's something that's set a benchmark for contesting the political space that Sisi has tried to completely monopolise," said Butter.

Two refugees detained in Egypt are facing deportation to Eritrea. The expulsion of the Eritreans, who have been incarcerated in Cairo for more than eight years, has been halted ... END_OF_DOCUMENT_TOKEN_TO_BE_REPLACED

International relations are shifting across the Middle East as regional powers adapt to America's retrenchment and China's growing influence. Although the region could become the ... END_OF_DOCUMENT_TOKEN_TO_BE_REPLACED

Germany's foreign policy is explicitly values-based. But what happens, Ralf Bosen asks, when democracy, the rule of law and human rights collide with the logic of trade and ... END_OF_DOCUMENT_TOKEN_TO_BE_REPLACED

Egyptian author Nadia Wassef talks about opening the first independent bookstore in her home country; and her latest book in which she celebrates books and booksellers. By Manasi ... END_OF_DOCUMENT_TOKEN_TO_BE_REPLACED

"The people aren’t ready for democracy" has been the constitutional basis for Arab tyranny, its favourite slogan and its sacred narrative for more than a century. Yet, asks Khaled ... END_OF_DOCUMENT_TOKEN_TO_BE_REPLACED

END_OF_DOCUMENT_TOKEN_TO_BE_REPLACED
Social media
and networks
Subscribe to our
newsletter