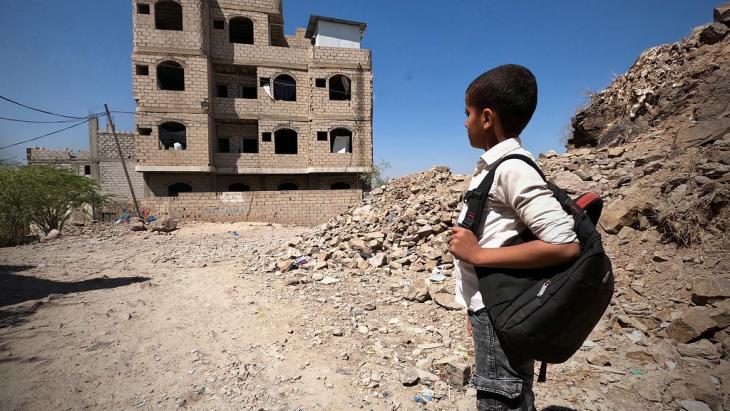 Nearly 700,000 Yemenis expected to flee their homes this year

With the world's worst humanitarian crisis now entering its seventh year, the United Nations predicts that another 672,000 people could be displaced by the end of 2021 if the current level of violence continues. Already this year, 834 civilian homes have been hit by gun violence.

"Yemenis have endured six years of empty promises from world leaders, many of whom continue to fan the flames of this war. Decisive action must be taken now to stop the relentless countdown to a completely avoidable famine," said Jan Egeland, Secretary General of the Norwegian Refugee Council (NRC). "Yemenis need three things to end this nightmare: a ceasefire to prevent famine, a doubling of aid, and the resumption of peace talks."

Six years of war have had a devastating impact on Yemen's people, economy and development. It has set the country's development back 21 years and robbed a generation of its future. If the conflict continues, Yemenis, already facing an extreme humanitarian crisis, can expect their situation to deteriorate further.

As the country enters its seventh year of conflict, NRC warns that Yemen could once again descend into full-blown war. The flare-up of conflict in Marib, Hodeidah, Taiz and Hajjah has led to displacement, mass civilian casualties and continued attacks on homes, farms, hospitals and schools.

Today marks six years of the Saudi-led air war in #Yemen. The bombing campaign has, on average, killed almost 1,500 civilians every year, a quarter of them children. Read @YemenData 6 year summary - https://t.co/3IuHnvM9G4 pic.twitter.com/LqK02AMTnJ

"Before the war, we enjoyed a comfortable life and had three meals a day. How could I have stayed when bullets were constantly flying over our heads? It's a front line," said Ali Ali Ayyash, a displaced father from Hodeidah.

By 2019, the armed conflict had killed nearly a quarter of a million people, either directly from hostilities or indirectly from inadequate supplies of food, medical care and infrastructure, according to an independent analysis. In 2020 alone, an estimated 2,087 civilians were killed or injured, with an increased proportion being women and children.

"When I visited Yemen earlier this month, I was deeply shocked by how inhumane the situation has become after six long years of war. The conflict is a source of endless suffering for Yemenis and must be resolved," said Egeland.

The USA and NATO plan to withdraw from Afghanistan by September. The operation is risky, the outcome uncertain. Many Afghans fear civil war. The quake on the Hindu Kush will also ... END_OF_DOCUMENT_TOKEN_TO_BE_REPLACED

The Prophet Muhammad never executed anyone for apostasy, nor encouraged his followers to do so. Nor is criminalising sacrilege based on Islam’s main sacred text, the Koran. In ... END_OF_DOCUMENT_TOKEN_TO_BE_REPLACED

Surging coronavirus cases in many parts of the world have overshadowed the start of this year's Muslim holy month of Ramadan, with festivities once again curtailed by contagion ... END_OF_DOCUMENT_TOKEN_TO_BE_REPLACED

German Middle East analyst Guido Steinberg and television journalist Ulrich Tilgner have both published new books on the conflicts in the Middle East. Their analyses and their ... END_OF_DOCUMENT_TOKEN_TO_BE_REPLACED

On 27 March, Iran and China signed a 25-year accord intended to foster "strategic co-operation". Despite ongoing uncertainty over the deal's actual scope, content and chances of ... END_OF_DOCUMENT_TOKEN_TO_BE_REPLACED

Researchers agree that climate change alone cannot be blamed for the outbreak of war in Syria in 2011. However, neither can it be ignored as a reason this once blossoming country ... END_OF_DOCUMENT_TOKEN_TO_BE_REPLACED
Date:
Mail:
Send via mail

END_OF_DOCUMENT_TOKEN_TO_BE_REPLACED
Social media
and networks
Subscribe to our
newsletter