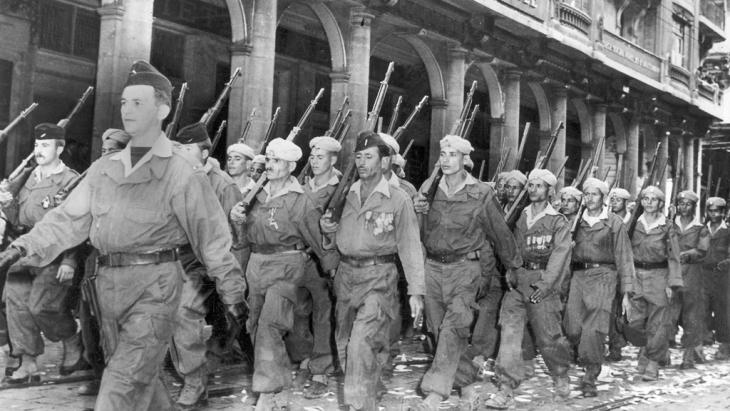 Sixty years since the beginning of the Algerian war
National fronts?

The Algerian War began 60 years ago. Some eight years later, a new Arab nation came about – and a million Algerians of French origin fled to France. The recent successes of the extreme-right Front National have made these "pieds-noirs" a political factor again, as the fronts of the Algerian War retain contemporary relevance. By Jakob Krais

During her campaign for the local and European elections at the beginning of 2014, Marine Le Pen addressed an open letter to her "friends, the harkis and pieds-noirs". It was an assessment of the former French president Charles de Gaulle, the founding father of the Fifth Republic.

In her letter to the former soldiers of the French auxiliary troops in the Algerian War, the harkis, and the Algerians of French origin, the pieds-noirs, the chairwoman of the extreme-right Front National (FN) wrote that de Gaulle had abandoned both groups, "which had suffered so greatly under his policies on Algeria, in a criminal manner". Sixty years after its outbreak, the Algerian War is evidently still an emotional issue for many.

When the Algerian liberation movement Front de Libération Nationale (FLN) began its fight for independence from France with a series of attacks on 1 November 1954, Paris initially believed it was an insignificant episode. This "red All Souls' Day", however, was the opening to one of the bitterest colonial wars of the 20th century. 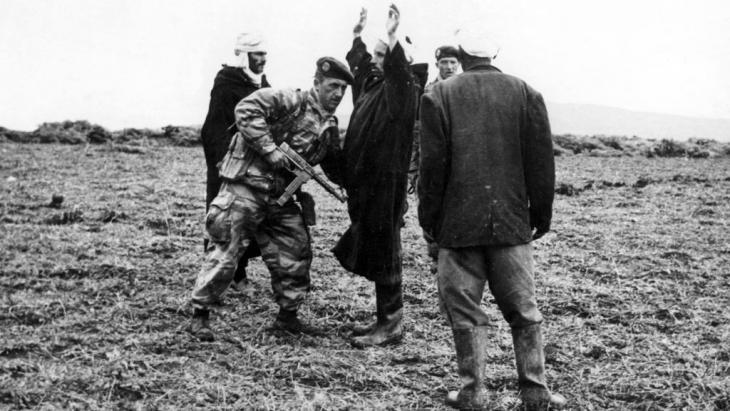 One of the bitterest colonial wars of the twentieth century: a war of liberation led by the National Liberation Front broke out in French-administered Algeria in 1954. Independence from France did not come until 1962

Hundreds of thousands of Muslim Algerians lost their lives during the almost eight-year conflict. The civilian population suffered through terrorist attacks by both sides. Particularly during the 1957 Battle of Algiers, French troops also practiced systematic torture and murder of prisoners. Nor did France find peace on the domestic front.

By 1954, around a million people of European origin lived in Algeria. While these pieds-noirs were a clear minority in a society with almost nine million Muslim Algerians, they wielded a disproportionate amount of political clout. This European minority torpedoed the efforts of the socialist government, for instance, which had won the 1956 elections with a promise to end the conflict.

When the "motherland" once again appeared too hesitant for their taste, right-wing pieds-noirs and officers even initiated a coup d'état in May 1958, bringing General de Gaulle to power – the start of the Fifth Republic still in existence today. On his first visit to Algeria, de Gaulle exclaimed to the cheering crowds: "I have understood you!"

However, before long the settlers' lobby soon felt not at all understood by the president, but instead – as Le Pen recalled – abandoned. The hero of World War II, of all people, aimed not for a military victory but for peace. In response, the same circles that had given de Gaulle a leg up to power staged a second putsch in April 1961 – this time against the national hero, and this time unsuccessfully. 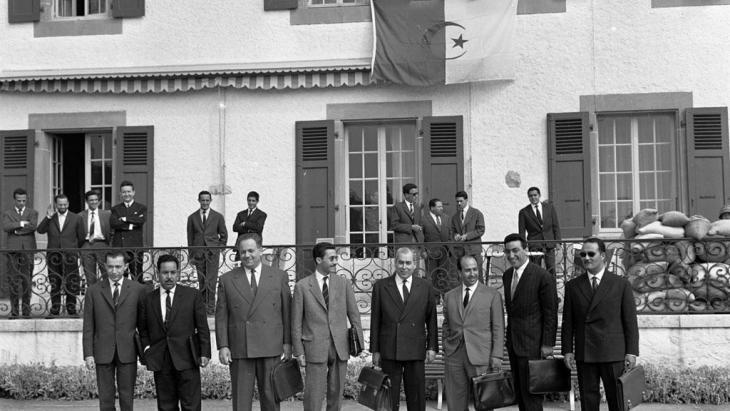 The end of the bloodiest chapter in Algerian-French relations: on 18 March 1962, the Évian Accords put an end to the conflict over Algeria's independence from France, which had lasted more than seven years

The supporters of Algérie française didn't give up there though. Generals and radical right-wing settlers' leaders founded the terrorist group Organisation armée secrète (OAS), with the aim of scuppering the peace process begun with the Évian negotiations in 1961. The OAS assassinated and attacked FLN fighters, Muslim civilians and French politicians, and conducted several (failed) attempts on the president's life.

It could not prevent the inevitable, however. In March 1962, the Paris government and the Algerian national liberation movement agreed a ceasefire in Évian. On 5 July, Algeria finally gained its independence. With the courage of desperation, the OAS intensified its terrorist campaign and tried to prevent Algerian French from leaving the country.

The only thing the radical pieds-noirs achieved by these means, though, was even greater counter-terror from the Muslim Algerians, in the face of which all descendants of European settlers fled to France – among them the Algerian Jews, who had long held French nationality. 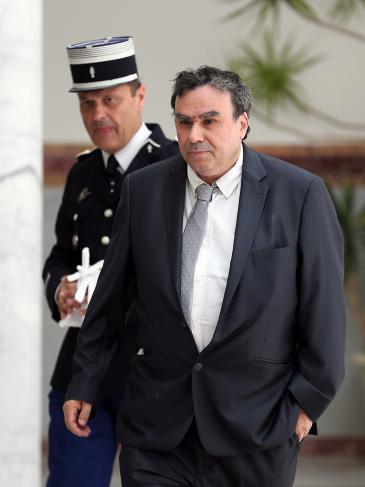 Benjamin Stora: "With the rise of the Front National, the extreme right reactivated a revanchist recollection that turns against the immigrants and feeds on vivid memories of French Algeria."

At the time of the ceasefire there were also over 260,000 Muslims serving in the French army. The victorious FLN went on to persecute these harkis as traitors, driving them out of the country or killing them. Those who managed to get to France had to spend many years in camps and received next to no support from the French state.

Yet France's Algerian community does not consist solely of former harkis. Algerian migrant workers have been coming to France since World War I. It was here, among the workers in Paris and Marseille, and not in Algiers or Kabylie, that the Algerian independence movement was born. The devastation of 1954 to 1962 served only to increase immigration. According to various estimates, there are now some four million people of Algerian origin living in France.

The historian Benjamin Stora explains that these immigrants were often not a welcome sight, particularly after the Algerian War: "You wanted independence for Algeria, so why are you still in France?" was one common argument. Even today, says Stora, this ethnic group is "the main victim of racist crimes in France."

Stora, an expert on the Algerian War who came to France as a child, himself from a Jewish family from Constantine in east Algeria, even speaks of a form of French-style "Confederacy", a type of racism aimed mainly at Muslims. This, he says, is based essentially on the ideology of the settlers' colonisation in Algeria, which regarded the local population as inferior, at best as cheap labour – similarly to the Afro-Americans in the Confederate states under segregation.

This racism is tough to shift, says Stora. "With the rise of the Front National, the extreme right reactivated a revanchist recollection that turns against the immigrants and feeds on vivid memories of French Algeria." The pieds-noirs should not be written off en masse as a radical right-wing force, by any means. However, they and their descendants – according to the Paris Centre de recherches politiques a good three million voters (of a total of 46 million) – do vote for the Front National more often than average.

Le Pen's party – which became France's strongest political force in the 2014 European elections – is happy to pander to nostalgia for Algérie française. It is no coincidence that the FN's heartlands are in the south of the country, where most pieds-noirs settled. As of this year, the party has numerous mayors there – the French "Confederacy" is regaining strength six decades after the outbreak of the Algerian War.

Nouara may be 65, but she is ready to join thousands of others who burn their ID and pay traffickers for the chance of a new life in Europe. Zineb Bettayeb reports END_OF_DOCUMENT_TOKEN_TO_BE_REPLACED

In Doha, Arabs from Morocco, Tunisia, Egypt and Algeria are gathering to celebrate the first ever FIFA World Cup to be held on Arab soil. The criticism from Europe? Over the top, ... END_OF_DOCUMENT_TOKEN_TO_BE_REPLACED

"Rebel Game: The Power of Football in the Middle East and the Qatar World Cup", an anthology published by Middle East researchers Jan Busse and Rene Wildangel, takes the upcoming ... END_OF_DOCUMENT_TOKEN_TO_BE_REPLACED

After a two-year hiatus, the Arab League re-convened at the beginning of November in Algiers against a backdrop of uncertainty and discord. By Pierre Boussel END_OF_DOCUMENT_TOKEN_TO_BE_REPLACED

The history of Jews and Muslims is far more entangled than you might imagine – but you have to listen out for it. In "Recording History", Christopher Silver takes us on a sonic ... END_OF_DOCUMENT_TOKEN_TO_BE_REPLACED
Author:
Jakob Krais
Date:
Mail:
Send via mail

END_OF_DOCUMENT_TOKEN_TO_BE_REPLACED
Social media
and networks
Subscribe to our
newsletter