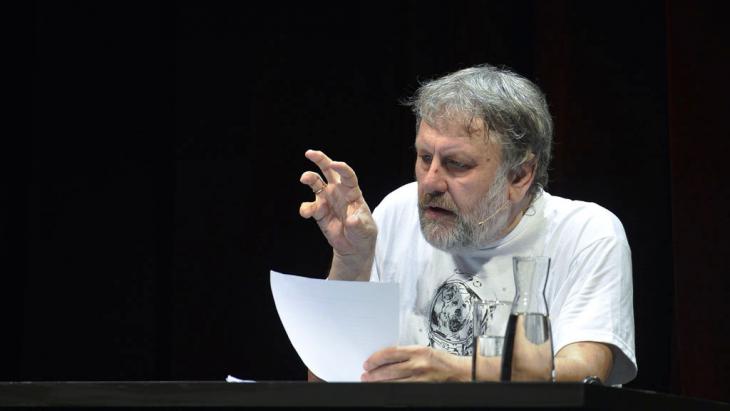 Slavoj Zizek’s exploration of Islam and modernity
A Eurocentric perspective

Unlike most of his published work, Slavoj Zizek′s latest essay on Islam and modernity is not left-wing at all. Rather surprisingly, he is favour of restricting the mobility of refugees within Europe and defends a whole range of Eurocentric attitudes. By Tarkan Tek

It was the devastating terrorist attack on the editorial offices of the satirical magazine Charlie Hebdo in Paris which proved the catalyst for the much-quoted philosopher Slavoj Zizek to bring out a book, published in German as Blasphemische Gedanken – Islam und Moderne (Blasphemous Thoughts – Islam and Modernity).

The book is divided into two parts: the first, entitled "Islam as a way of life" contributes to the current discussions around Islam today, while the second part, "Looking into the archive of Islam", examines more fundamental aspects of Islam, including the psychoanalytical.

In the introduction to these two parts, Zizek addresses the supposed cohesion of the heads of state who demonstrated unity in the fight against terrorism in the wake of the Paris attacks and finds it to be hypocritical. He writes: "On that Sunday, political greats from all over the world held hands, from David Cameron to Sergei Lavrov, Benjamin Netanyahu to Mahmoud Abbas. If ever there was an image of hypocrisy, this was it". To this he adds the question of why this assassination was directed at France rather than America? After all, the terrorists were concerned with the US-led occupation of Iraq. Yet, if he is going to bring up the USA’s imperialism towards the Middle East, then he must not forget France's imperialism towards many Muslim countries and regions, above all Algeria, Libya, Mali – not to mention its role in the Syrian war, which is just as important.

Throughout the book, Zizek reproaches left-wing liberals for the bias they have shown in disapproving of such attacks. He accuses them of being too reticent in their condemnation for fear of being charged with racism and of bringing up the West’s responsibility for atrocities and massacres in the so-called Third World in order not to provoke Muslims. The left's inability to criticise and the labelling of any criticism of Islam as Islamophobic racism, is another of Zizek’s central points: this he regards as a pathological problem. 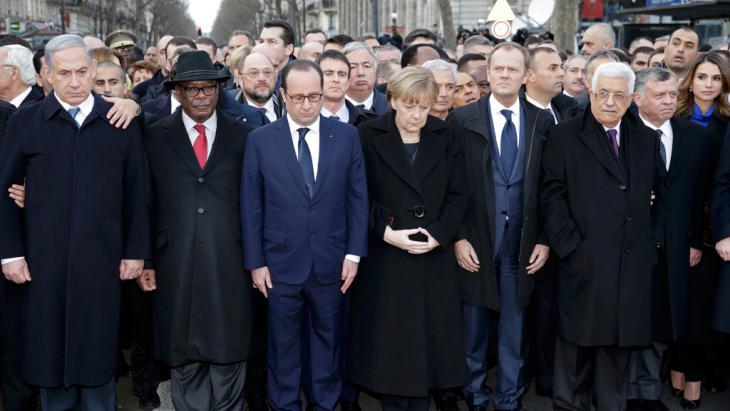 "Image of hypocrisy ": "Thinking means going beyond the pathos of general solidarity, which exploded in the days following the attacks and peaked on 11 January 2015. On that Sunday, political greats from all over the world held hands, from David Cameron to Sergei Lavrov, Benjamin Netanyahu to Mahmoud Abbas. If ever there was an image of hypocrisy, this was it," writes Slavoj Zizek

Islam – according to Zizek – is treated with too great a tolerance. But he doesn’t say what we should be doing instead. Should the Muslim minority be placed under even greater pressure? Zizek fails to give a clear answer. Instead, he explains to us that fundamentalism is a "mystificatory" reaction to liberalism and its manifestations in other parts of the world. Although liberalism sees itself as a realistic counter-movement to fundamentalism, its shortcomings tend to mean that it triggers and feeds into radical thinking and fundamentalism instead. Zizek argues that this is exactly why liberalism is reliant on a radical left and its fundamental standpoints to preserve its values and achievements.

On the one hand, Zizek describes liberalism as a solution for the fundamentalism indirectly supported by the far left, but at the same time he does not exempt liberalism from responsibility in his criticism of the political system. This makes his analysis all the more contradictory since, as mentioned above, he also credits left-wing radicalism with providing a firmer opposition to fundamentalism.

In the second part, Zizek ventures a psychoanalytical portrayal of Islam, beginning this discussion with the Islamic understanding of God. From there, he works out how it differs from the other revelation-based religions:

"Unlike Judaism or Christianity, the other two book religions, Islam excludes God from the area of fatherly logic: Allah is not a father, not even a symbolic one – God is one, He is neither born nor brings creations into the world. There is no room for a holy family in Islam. This is why Islam places such heavy emphasis on the fact that Muhammad himself was an orphan". 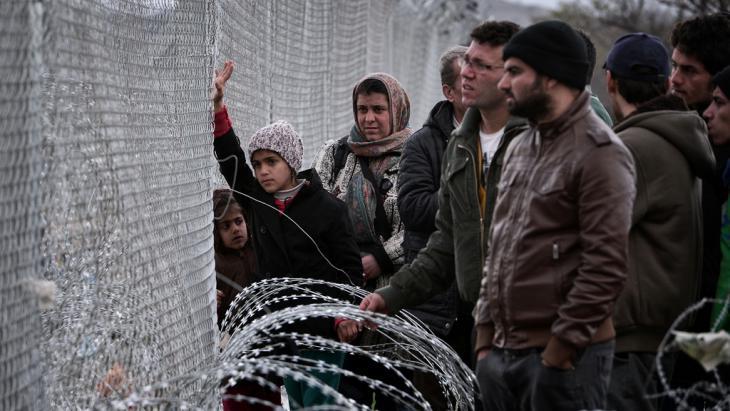 Pulling up the drawbridge: by pursuing a policy of exclusion, Europe is able to present itself as a homogeneous construct – an idea to which even left-wing intellectuals and social philosophers such as Slavoj Zizek are susceptible, says Tarkan Tek

As Zizek has already mentioned, this understanding of God is not to be found in any of the other religions. Originally the Prophet Muhammad’s family was not accorded any holy status. But that didn’t prevent the family from later being recognised as the legal successors to the Caliphate. This right was incorporated into the doctrine of the later "Shia" school of thought, thereby according holiness to the family of the Prophet.

So a sense of the holiness of the family is certainly to be found in Islam today – albeit in a minority position – and Zizek could easily mention this, offering the reader a differentiated approach. As far as the institutionalisation of Islam is concerned, Zizek finds few similarities between Islamic and Christian institutions. The existence of a "community of faith" (Ummah) and the anti-national concepts in Islam are phenomena that prevent an actual institutionalisation. In this context, Zizek also points out that unlike other institutionalised religions, Islam is not based on a "sacrificing" idea of man.

Zizek is often criticised for writing very brief analyses that cover a broad, populist spectrum of topics and are therefore superficial and contradictory – but in some cases this may be going too far. The first part of the book, for example, lacks the left-wing orientation to be found in most of his previous texts, which has become a feature of Zizek's analyses. Instead, he has produced a surprising text in which he pleads the case for limiting the mobility of refugees in Europe and defends many Eurocentric positions.

Another example is Zizek’s deliberate juxtaposition of the terms "Islam" and "modernity", as if they are true opposites, in the process fanning the flames of the public′s already overheated mood. Despite criticising liberalism, the text is informed by a polarised worldview. He divides the world into an "us" – the West, liberal despite its hypocrisy and its Imperialist history – and a "them", the world of Islam and fundamentalism as its polar opposite. His depiction of Islam only partly does justice to the inhomogeneity of this religion and must be rejected overall for the way it lumps the whole of Islam together.

The few places where the text gives a differentiated picture of Islam seem like attempts at legitimation by the author and do not mitigate the essay’s fundamental position.

Zizek repeatedly mentions the patriarchal elements of Islam. In many areas, he is justified in this: Islam does have patriarchal structures, which are quite simply a reflection of the patriarchal community at the time the Koran was revealed. But why Zizek edits out Muslim feminists, for example, who approach the Koran in its historicity and generate entirely different ways of looking at it, is unclear.

Another notable feature of Zizek’s text is the emphasis on the authority he claims the Prophet Muhammad exercised over the women in his household. In relation to his leadership role and certain ideals this may be accurate, but there can be no talk of unlimited sexual entitlement to women. This is clearly shown by the fact that Islam initially limited polygamy in Arab culture and then ultimately recommended monogamous marriage – at the time, this represented a major change in the nature of relationships. The Prophet’s treatment of women must therefore be seen within a historical context that relates to the state of Arab culture at the time.

Home
Print
Newsletter
More on this topic
A Muslim woman speaks out on exclusion: "Returning to the Dark Ages"Nine Muslims on right-wing populism: Should I stay or should I go?Non-fiction: ″Angst ums Abendland″ by Daniel Bax: The apocalyptics of the West
Related Topics
Charlie Hebdo, Colonialism, Criticism of Islam, Islamism | Political Islam, Islamophobia, Jihadism | Jihadists, Koran | Quran, Muslims in the West, Policy on refugees and migration, Radicalisation
All Topics

Research project "The Global Qur'an", brainchild of Professor of Islamic Studies Johanna Pink and sponsored by the European Research Council, analyses the history and ... END_OF_DOCUMENT_TOKEN_TO_BE_REPLACED

As the Western world emerges from a holiday season made less festive by COVID-19, millions of children in Afghanistan are starting 2022 facing the prospect of famine, illness, and ... END_OF_DOCUMENT_TOKEN_TO_BE_REPLACED

A wedding extravaganza of bright colours, flowers, feasting and dancing, yet the bride, Nefie Eminkova, who comes from Bulgaria's Pomak – Muslim – minority, can see none of it. ... END_OF_DOCUMENT_TOKEN_TO_BE_REPLACED

Every year in December, the team at Qantara.de takes a look back at the articles that proved most popular with our readers. This year is no different. Here is a run-down of the ... END_OF_DOCUMENT_TOKEN_TO_BE_REPLACED

Jesus – Issa in Arabic – doesn’t merely enjoy the highest place among the prophets in the Koran. He is also revered in Islam’s mystical tradition for his message of love and mercy ... END_OF_DOCUMENT_TOKEN_TO_BE_REPLACED

The military in Sudan has never waged war against a neighbour, but it has already staged 17 coups. Tens of thousands of people are risking their lives to oust the military by ... END_OF_DOCUMENT_TOKEN_TO_BE_REPLACED
Author:
Tarkan Tek
Date:
Mail:
Send via mail

END_OF_DOCUMENT_TOKEN_TO_BE_REPLACED
Social media
and networks
Subscribe to our
newsletter