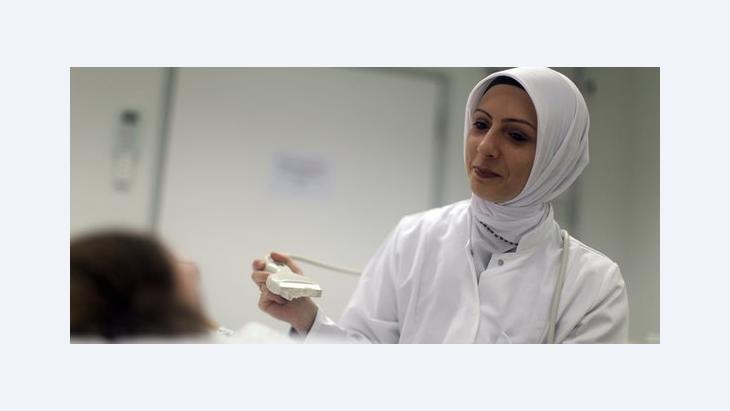 Social and Educational Services for Muslims in Germany
''We Want Participation, Not Integration''

While German politicians continue to argue whether Islam is part of Germany or not, German Muslims have for quite some time been making a contribution in many social spheres. But many institutions in Germany are still at the beginning of a process of intercultural opening. Claudia Mende reports

The political debate in Germany has masked the fact that Muslims have long been participating in many social spheres. They have been insisting on more participation in communities, schools, and social welfare institutions. A new generation of young and well-educated Muslims is confidently raising the issues that affect their community, just like their Christian and secular co-citizens.

A conference hosted by the Catholic Academy in Stuttgart together with two associations of the Gülen movement in Baden-Württemberg, “Süddialog” and “Begegnungen”, focused on Christian and Islamic initiatives in cooperative public welfare efforts. 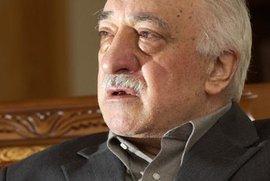 "Building schools, not mosques": In accordance with the theories of Fethullah Gülen, education is more important than religious instruction

​​In recent years, the Catholic Academy in Stuttgart has gained a reputation for promoting constructive and open dialogue with Muslims. The participation of the “Süddialog“ and “Begegnungen” associations marked the first time an event was held with representatives of the Gülen movement. The movement, founded by the US-based Turkish intellectual Fethullah Gülen, remains controversial, yet it has primarily concentrated on the issues of education and dialogue.

Everyday local problems are at issue

"The Muslim basis is very open to engage in dialogue. There is great interest among Muslims, even young Muslims," says Jürgen Meyer, chairman of the coordination committee of the Christian-Islamic Dialogue association. "It is not politics that moves us forward, but rather local interests."

What are at issue are everyday local problems. First generation immigrants are getting older and issues such as healthcare and support of the elderly are becoming key concerns. Families require counselling on education and support in a school system in which children's success is increasingly dependent on initiative by their parents. According to a study entitled "Islamic Community Life in Germany", published in April by the Centre for Turkish Studies, Islamic mosque communities and Alevite communities in Germany offer a great variety of social services in addition to their religious activities.

The study, commissioned by the Islam Conference, provides for the first time country-wide statistics on the internal lives of Muslim communities in Germany. It asserts that over 40 percent of Muslim communities offer their members social and educational counselling and more than half of them provide students with tutoring assistance. Around 36 percent of mosque communities also offer health care counselling for the faithful. The vast majority of these social activities are carried out by volunteers.

Until now, Muslims have hardly built up any institutional structures in the social sphere. Yet, social welfare needs will continue to grow in the future, stresses Havva Engin from the Heidelberg University of Education. 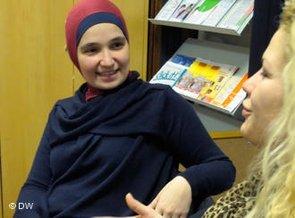 The German educational and social system faces the intercultural challenge of opening itself to individuals with an immigrant background. Pictured: Family councillor Aylin Yanik-Senay (left) in her office at the Begegnungs- und Fortbildungszentrum muslimischer Frauen (BFmF) e.V. (Muslim Women's Outreach and Education Centre) in Cologne

​​Even when old-age homes and care facilities for the elderly remain unimaginable for many traditional Muslims, the support and care outside of the family for elderly Islamic migrants will be a pressing concern in the coming years. It is a certainty that there well be a need for more hospices catering to the special requirements of Muslims. Such social services must be run professionally and can no longer be properly provided by volunteers.

The Christian welfare organizations Caritas and Diakonie carry out their social work in the areas of child day care, counselling, and old-age homes and care facilities with regular financing by the state. Such funding has not applied in the case of social work for Muslims.

Caritas and Diakonie have indeed discovered the issue and their services are available to everyone regardless of denomination or religion. In this respect, they have currently begun intercultural training courses for some of their staff. Workers are taught how to better deal with interreligious concerns. Intercultural opening, however, requires much more. Immigrants must be included as staff members in these organizations and this entails that they will also help in determining their long-term future direction. This demand was also recently raised by the Baden-Württemberg Integration Minister Bilkay Öney (SPD).

It is difficult imagining Caritas implementing such moves. To date, there have been individual Muslims active with Caritas in the area of elderly care, for instance. But the intention of the Caritas association is to restrict this to a case-by-case basis at the federal level. A wider opening would mean a change in official Church regulations, and that is currently not open for debate.

Individual Caritas associations at the diocese level are much more open in this respect. The diocese of Rottenburg-Stuttgart has seriously discussed the issue in light of the rising number of qualified Muslims in the field.

Muslims are also increasingly raising their concerns within the educational system. It is therefore not surprising that so far no new school models for Muslims have originated from the state system. 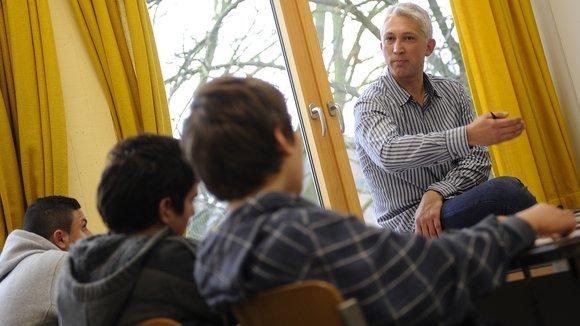 With a commitment for the common good, Muslims have long been playing their part in society, influencing the future direction of the country, says Claudia Mende. Pictured: Islamic lessons at a school in Münster, North Rhine-Westphalia

​​The example of the Prisma schools in the Swabian city of Böblingen shows how immigrants are capable of creating a framework for the educational success of their children. The motivating factor has been a sober assessment of state schools and their own experience with discrimination.

A non-profit association close to the Gülen movement has established two private full-day schools here, in which religion does not play a role. The upper secondary school and the high school are open to students of all denominations and religions. They are focused on educational performance and offer a state-of-the-art educational programme.

Instead of religious instruction, only ethics courses are offered at the Prisma schools. In accordance with the theories of Fethullah Gülen, education is what is important, not religious instruction. Ismail Temel from the school board of trustees tells of his own experiences with discrimination when he went to school. He wants to spare his children from any similar misfortune. In addition, the board wants to do something for problem children in the district and is offering a scholarship for poor families. "What we want is not integration, but participation," stresses Temel.

"The Gülen movement has brought a fresh wind to the situation in Germany," is also the assessment of Jürgen Meyer. The movement is not directly linked to mosque associations and is primarily committed to educational improvement. Members of the Gülen movement are well-educated, have a good income, and are seriously involved in the movement's projects.

Now German society at large is slowly coming to embrace plurality. For the 2012/13 school year, the Catholic school board in the Osnabrück diocese will open a so-called "three religion school". The Ditib State Association of Lower Saxony, the Schura of Lower Saxony (the umbrella group of mosque associations in the state), and the Jewish Community of Osnabrück have all cooperated with the Catholic Church in order to realize the project.

In this first "three religion school" in Germany, Muslim teachers will be allowed to wear a headscarf and Jewish religion instructors can wear a Kippah. "The school is a shining example of religious coexistence in Osnabrück," says Winfried Verbung of the Osnabrück diocese confidently. The school will be a significant contribution to the interreligious opening of society.

Iranian author Fariba Vafi is adept at describing everyday scenes and concealing within them something ambiguous, in parts strange and grotesque. She writes novels – which have ... END_OF_DOCUMENT_TOKEN_TO_BE_REPLACED

Her grandparents are Jews – born in Tunisia and Algeria. Director Cleo Cohen has now broken the silence about this with a very personal debut. By Nadine Wojcik END_OF_DOCUMENT_TOKEN_TO_BE_REPLACED

Life imprisonment for crimes against humanity: that was the sentence handed down to Anwar Raslan in the world's first trial of a member of the Syrian torture system. Matthias von ... END_OF_DOCUMENT_TOKEN_TO_BE_REPLACED

Every year in December, the team at Qantara.de takes a look back at the articles that proved most popular with our readers. This year is no different. Here is a run-down of the ... END_OF_DOCUMENT_TOKEN_TO_BE_REPLACED

With his new album, "A Voice Keeps Calling Me", the Persian santur player Kioomars Musayyebi is building bridges from Iran across the Arab world to European early music. By Stefan ... END_OF_DOCUMENT_TOKEN_TO_BE_REPLACED

Former lawyer Said Haider has invented a chatbot for those seeking advice on anti-discrimination issues – Meta is the first chatbot of its kind in the world. In conversation with ... END_OF_DOCUMENT_TOKEN_TO_BE_REPLACED
Author:
Claudia Mende
Date:
Mail:
Send via mail

END_OF_DOCUMENT_TOKEN_TO_BE_REPLACED
Social media
and networks
Subscribe to our
newsletter