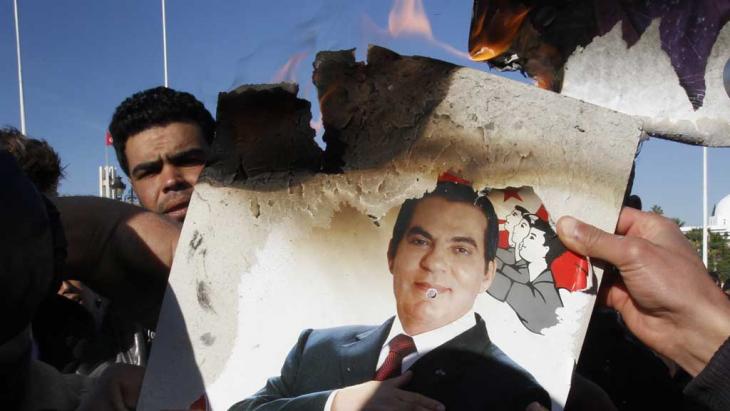 Social media and the Arab Spring in Tunisia

Not as soft as jasmine

Social media did not topple Tunisia's dictator Zine el-Abidine Ben Ali, but they certainly played an important role. According to the Tunisian blogger Aya Chebbi, cyber activism is now an important tool for democratisation in this North African country

When broad-based protest movements erupted in North Africa in the winter of 2010/2011, the media searched for some terms to describe these uprisings. They still speak of "the Jasmine Revolution" in Tunisia, the "the Arab Spring" and the "Facebook Revolution".

Many wouldn't agree that the fate of Tunisian martyrs who died for dignity was anything as soft as jasmine. Becoming victims of tear gas and rubber bullets was not pleasant either. Peoples' fight for freedom and democracy in the Arab region should not be reduced to the season "spring". Nor would many cyber-activists who have suffered repression and almost lost their lives agree that profound political and social transformations basically relate to Facebook.

However, it cannot be denied that social media played a crucial role in the chain of events that led to political and social change in Tunisia. The country had witnessed two major protest movements against dictatorship before: the "Bread Revolt" of January 1984 under President Habib Bourguiba and the "Revolt of the Gafsa Mining Basin" in 2008 under President Zine el-Abidine Ben Ali. The latter in particular proved unable to spread across the nation, so the coercive forces of the regime were easily able to crack down on it. 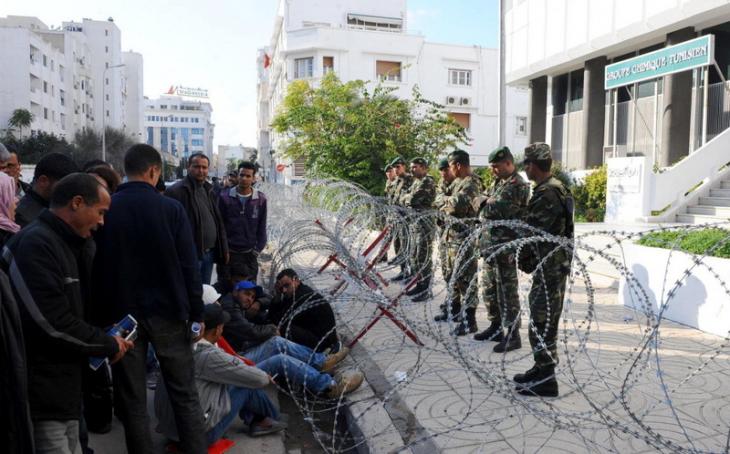 
In December 2010, things were quite different. Information that hurt the government spread with unprecedented speed. State agencies were unable to control digitised communication. Only 28 days of mass mobilisation changed the political climate in Tunisia completely, and, after 23 years, the Ben Ali regime fell.

In the winter of 2010/11, information spread directly from the local to the international level. The values and demands of the movement were expressed on various blogs and thus became accessible all over the world. The criminal and immoral nature of Ben Ali's regime was revealed for all to see.

Before the revolution, young people had basically used Facebook to socialise with each other. Then they spontaneously used it to mobilise people for protests and were surprised to discover how effective it was. Social media became an alternative to the mainstream media, not only in terms of reporting current affairs, but also serving as a platform for debate and even organising collective action.

A history of cyber activism

Today, many believe cyber activism started with the circulation of the pictures of Mohamed Bouazizi's self-immolation and subsequent videos of protests and police brutality in late 2010. But some bloggers knew long before that that state agencies were afraid of information being spread on the Internet. There had been many cases of blog censorship. 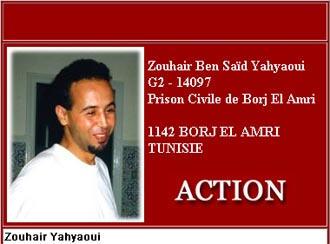 Tunisia's first "martyr of Internet freedom": Zouhair Yahyaoui was arrested in 2002 and given a prison sentence for running the website "TuneZine", which was critical of the government. During his 18 months in prison, Yahyaoui was tortured. After his release, he died of a heart attack on 13 March 2005

"I first saw the impact of the web with the track down, arrest, imprisonment then death of Zouhair", says Abdelkarim Ben Abdallah, who started his blog Mouse Hunter in 2003. Zouhair Yahyaoui is considered the first "martyr of internet freedom" in Tunisia. He was arrested in 2002 and sentenced to prison for running Tunezine, a website that criticised the government. He suffered torture and deprivation in prison for 18 months. After being released, he died of a heart attack on 13 March 2005. For this reason, 13 March was declared National Day of Internet Freedom in 2012.

Indeed the regime repeatedly shut down blogs, intimidated contributors and judicially harassed them. The government felt threatened by the cyber world and tried to restrict Internet content. Repression certainly did not begin with the imprisonment of Slim Amamou on 6 January 2011, news of which further fuelled the revolutionary movement.

A blog is accessible to all Internet users, whereas social media platforms only grant full access to registered users. To follow someone on Twitter or Facebook, one needs that person's permission. Accordingly, governments find it more difficult – though not impossible – to monitor social media. Under Ben Ali's dictatorship, ever more people had begun to use social media, where the government was not monitoring communication stringently. Thanks to its wide reach, Facebook became a tool for revolutionaries.

Social media as a tool for positive change

Social media help users make others aware of all sorts of items on the Internet. Links to video platforms such as YouTube or Dailymotion are quite popular. Of course, both were censored in the Ben-Ali era, not least because rap artists used them to highlight issues such as unemployment, corruption and police brutality. However, freedom remains restricted, as rappers Ahmed Ben Ahmed (known as Klay BBJ), Ala Yaacoub, (known as Weld El 15) and Hamada Ben Amor (known as El Général) well know. All of them were arrested, jailed or sentenced for releasing political rap songs. El Général was jailed during the revolution under Ben Ali, the other two last year.

Today, in the transition to a new political order, people continue to use blogs, online videos and social media to influence politics and draw attention to their causes. They benefit from the fact that an increasing number of people are using the Internet. 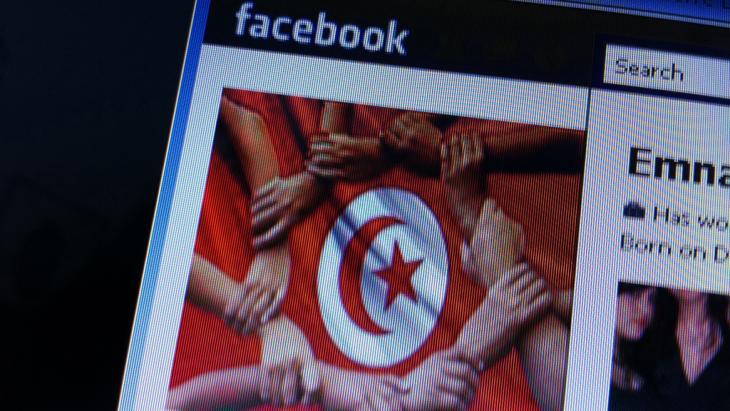 Facebook as a tool for revolutionaries: after the Tunisian dictator Zine el-Abidine Ben Ali was toppled, many Tunisians used a photo of hands joined in front of a Tunisian flag as their profile photo on Facebook

The blogosphere is continuously shaping the political climate. The distinction between blogs and social media is blurring, however, because many contributors are active on blogs as well as Facebook, Twitter, etc.

Moreover, many bloggers have become social media trainers, involving new people. Abdelkarim, for instance, has facilitated 50 workshops through "Les Ateliers de Blogging" since August 2011. This has helped young people – especially in the regions outside the capital – to create their own blogs and Twitter accounts and showed them how to use them for social change and to influence policy.

Some cyber activists assume the role of watchdogs. A prominent example was "Sheraton Gate" in late December 2012. Olfa Riahi, a blogger, released a series of receipts from the Sheraton Hotel in Tunis. She revealed that Rafik Abdessalem, the minister of foreign affairs, was involved in a potential adultery scandal and the misuse of public money.

The minister later resigned; his case is currently being investigated. For his party, the Islamist Ennahda, it was a major setback. Today, Olfa Riahi speaks of "winning one battle" in the "long war" for democratic governance. She resents the authoritarian leanings of Islamist politicians.

Today, policymakers from various parties and institutions are aware of the crucial role played by social media. Many have begun using social media themselves. Although they are not targeting young people exclusively, they are particularly interested in reaching this age group. Each party has its own official Facebook page and almost all public figures have Twitter accounts.

The role of social media in bringing down the dictatorship must not be over-emphasised. Zine el-Abidine Ben Ali did not flee because of Facebook pages; he fled the country when he saw masses of people rallying in the streets against him.

Moreover, social media cannot replace mainstream media, which have more technical and human resources for researching information and covering events. Nonetheless, social media matter because they offer a space where people can exchange views, think critically and, most fundamentally, exercise their freedom of expression.

Home
Print
Newsletter
More on this topic
The Impact of Crowd Dynamics on the Arab Spring: Like Dark Clouds Gathering before a StormSocial Media and the Arab world: Time for Jordan to Go OfflineNew Media and Democratization in the Arab World: No Pedestal for Facebook and Twitter
Related Topics
Arab Spring, Arabellion, Democracy and civil society, New media in the Muslim world, Tunisian Revolution
All Topics

The country's national election on 8 September will likely bring new government. But neither experts nor locals expect it to bring long-promised change, writes Cathrin Schaer END_OF_DOCUMENT_TOKEN_TO_BE_REPLACED

The coronavirus pandemic has turned lives upside down all over the world. In the Middle Ages, however, people lived with epidemics all the time. The best and most famous ... END_OF_DOCUMENT_TOKEN_TO_BE_REPLACED

A bird's eye view of eight hundred years of history: Brian A. Catlos tells the story of Al-Andalus in the style of a streaming series and deconstructs the myths of the Reconquista ... END_OF_DOCUMENT_TOKEN_TO_BE_REPLACED

In his new book, "Tangier/Gibraltar- A Tale of one city: An Ethnography", Dieter Haller looks at how shared experiences and practices have created a unique relationship and a ... END_OF_DOCUMENT_TOKEN_TO_BE_REPLACED

While Europe and North America experience something like a return to normality with relatively high vaccination provision and take-up rates, the rest of the world is struggling to ... END_OF_DOCUMENT_TOKEN_TO_BE_REPLACED

Algerian scholar Said Djabelkhir rejects the charge of "offending Islam". In interview with Ismail Assam, he maintains that he has been wilfully misconstrued. At the same time, he ... END_OF_DOCUMENT_TOKEN_TO_BE_REPLACED
Author:
Aya Chebbi
Date:
Mail:
Send via mail

END_OF_DOCUMENT_TOKEN_TO_BE_REPLACED
Social media
and networks
Subscribe to our
newsletter