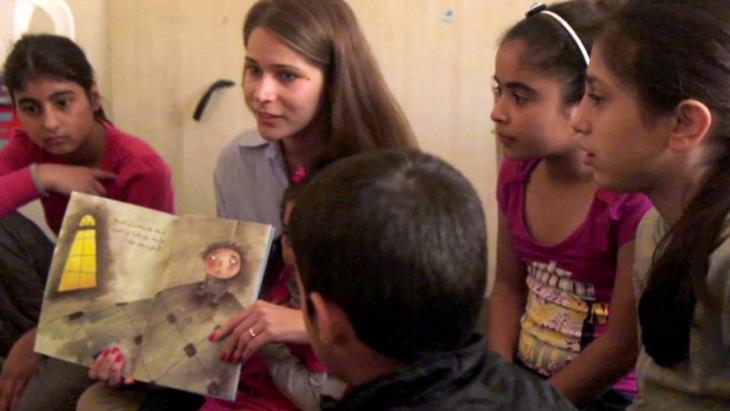 ″Songs and Stories for Syrians″

This February, a community centre in south-western England hosted a pioneering ″Songs and Stories for Syrians″: a weekend of art, literature and music not only for the enjoyment of Syria′s youngest refugees, but also for the English children who will live and learn alongside them. Marcia Lynx Qualey has the details

The weekend′s events, held in the county of Gloucestershire, were an offshoot of ″Singing for Syrians″, a project launched by the UK-based Hands Up foundation in 2014. But unlike many fundraisers that keep event-goers and refugees separate, this winter weekend brought together Syrian and English children for bilingual, bicultural fun.

The weekend was the brainchild of ″Babel Babies″ co-founder Ruth Ahmedzai Kemp and Syrian picture-book author and illustrator Nadine Kaadan. The weekend′s songs, courtesy of the Babel Babies multilingual music co-operative, were accompanied by art and story sessions led by Kaadan. These workshops served several purposes: they were a welcoming gesture to Syrians adjusting to life in a very different place; a way for English children to meet Syrians and hear Syrian stories; and a fund-raiser for Hands Up, so the foundation can provide emergency relief to Syrians struggling through their first English winter.

Although the British government committed, back in 2015, to welcoming up to 20,000 Syrian refugees by the end of this Parliament, the number of Syrians who had been granted humanitarian protection, as of September 2016, was fewer than 5,000, Kemp said.

Still, song and stories are an important part of making these Syrians – and the ones yet to come – feel safe and welcome. Kaadan said she hoped the weekend of events would catch on. ″We also encourage individuals, local communities, churches and schools across the UK to hold their own uplifting events, which can be open to everyone, especially children!″

Kaadan, an award-winning picture-book author, came to London from Syria in 2011. Although not yet thirty, Kaadan is the author of more than a dozen children′s books, with many focusing on children struggling at society′s margins, either because of disability or war. For the last several years, Kaadan has worked with refugee children in camps near Syria and in England. She′s also given readings to connect British children with Syrian stories.

Recently, Kaadan published her first children′s book in English, The Jasmine Sneeze. She would ″absolutely like to do more of these types of events around the UK.″ But more than that, Kaadan said, ″I also would like to invite local children′s book authors to join us in reading their own work – and I′m hoping that these events can promote a true sense of solidarity and multiculturalism where we sing in both Arabic and English and read stories from Syria and the UK.″ 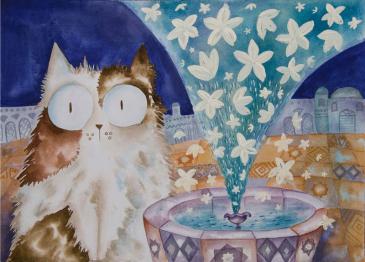 ″Learning a song or reading a picture book from another country and culture can teach a child so much – about another language, another way of thinking and another way of framing a universal idea,″ says event organiser Ruth Ahmedzai Kemp

There are, after all, few paths for English children to engage with Syria and Syrians, not through the news, but through art and music. Only a tiny handful of Arabic children′s books have been translated into English and possibly none by a Syrian children′s-book author. Kaadan′s new book, The Jasmine Sneeze, is one of a very few picture books about Syria.

Kemp said the experience for English children would be invaluable. ″Learning a song or reading a picture book from another country and culture can teach a child so much – about another language, another way of thinking and another way of framing a universal idea.″

Beyond the current conflict

″Whenever I show friends Nadine′s book The Jasmine Sneeze, they are stunned by her playful use of colour and the vivid, organic patterns in the scenery of the book: the tiles, the rugs, the architecture, the iron railings,″ Kemp said. ″I love reminding people that Damascus isn′t just the political capital of a country ravaged by war – it′s an ancient gem, it′s the ′City of Jasmine′.″

The celebratory fund-raising weekend featured art and writing workshops, story readings and song. Kaadan′s workshops and readings were aimed at children five and up, while the Babel Babies music-and-movement sessions targeted a slightly younger age group.

″But everyone was welcome,″ Kaadan added.

With this event is successfully under their belt, Kemp said she hoped to launch similar events in Manchester and Bristol. ″We′d welcome messages from refugee support groups and charities across the country who would like to organise something similar.″

Berlin's annual Human Rights Film Festival closed at the weekend. One entry to the festival was the documentary "Captains of Zaatari". Its Egyptian director Ali El Arabi focuses ... END_OF_DOCUMENT_TOKEN_TO_BE_REPLACED

"The people aren’t ready for democracy" has been the constitutional basis for Arab tyranny, its favourite slogan and its sacred narrative for more than a century. Yet, asks Khaled ... END_OF_DOCUMENT_TOKEN_TO_BE_REPLACED

Germany’s electorate includes some 7.4 million citizens with international roots, while many more millions of residents from abroad aren’t allowed to vote. Both groups are often ... END_OF_DOCUMENT_TOKEN_TO_BE_REPLACED

International relations are shifting across the Middle East as regional powers adapt to America's retrenchment and China's growing influence. Although the region could become the ... END_OF_DOCUMENT_TOKEN_TO_BE_REPLACED

Two decades after the attacks of 11 September 2001, the West faces the shattered debris of its failure – not only in Afghanistan, but also in Iraq, Syria, Libya and Yemen. What ... END_OF_DOCUMENT_TOKEN_TO_BE_REPLACED

They have lost everything; they are deeply traumatised – and yet they refuse to give up hope. In “The Beekeeper of Aleppo“, bestselling author Christy Lefteri focuses on the ... END_OF_DOCUMENT_TOKEN_TO_BE_REPLACED
Author:
Marcia Lynx Qualey
Date:
Mail:
Send via mail

END_OF_DOCUMENT_TOKEN_TO_BE_REPLACED
Social media
and networks
Subscribe to our
newsletter