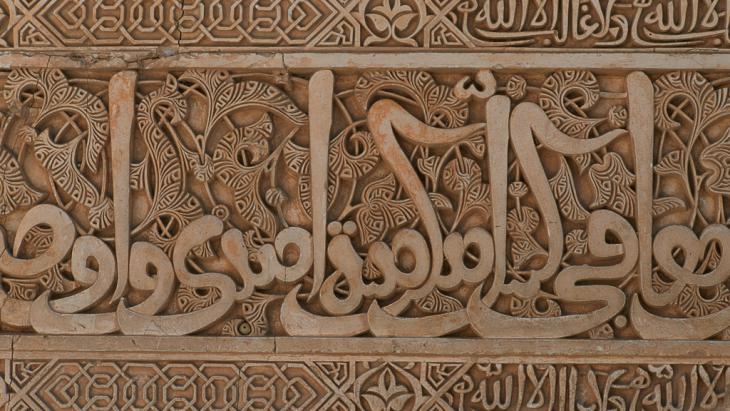 Spain and Ibn Arabi′s heritage
The great master of Murcia

Leave Seville′s San Salvador Church, with its massive altar ornamented in gold and countless statues of the Virgin Mary, by the back door and you reach a small courtyard. With the evocative strains of Baroque playback violin music still ringing in your ears, you spy an octagonal basin.

Not many tourists pay attention to the small square in the shadow of the church. In front of a yellow-painted wall enclosing the courtyard are the remnants of three stone arches and the top of a brick tower sticking out from the wall.

Little remains to indicate that this tower was once a minaret and the courtyard the place of ritual Muslim ablutions. Today′s church is sited where Seville′s most important mosque, Al Adabbas, once stood: at the heart of the city′s Muslim community. Muhyiddin Ibn Arabi, the great mystic and religious teacher of 12th century Islamic Spain, used to frequent the mosque and mentions it in several biographical anecdotes.

Source of inspiration from Spain to Indonesia

Through his writings Ibn Arabi was destined to shape the development of Islamic spirituality like no other mystic philosopher – 26th July marked his 850th birthday. For mystics down the ages, Ibn Arabi′s vast body of works (more than 350) has represented a treasure chest of gnostic wisdom. His literary heritage inspired Sufi masters from Moorish Spain in the west to their Muslim cousins in far away Indonesia. They knew him by his honorary ″Shaykh al-Akbar″ (the greatest spiritual master).

The ″Futuhat al-Makkiyya″ (The Meccan Illuminations) and the ″Fusus al-Hikam″ (The Gemstones of Wisdom) are considered Ibn Arabi′s most famous works. The ″Futuhat″, over one thousand pages of Arabic, took Ibn Arabi thirty years to write. This huge encyclopaedia of esoteric knowledge unites the three sources of knowledge: tradition, reason and mystical intuition. The ″Fusus″, which is considerably shorter but rich in content, is dedicated to the spiritual wisdom associated with the Islamic prophets. 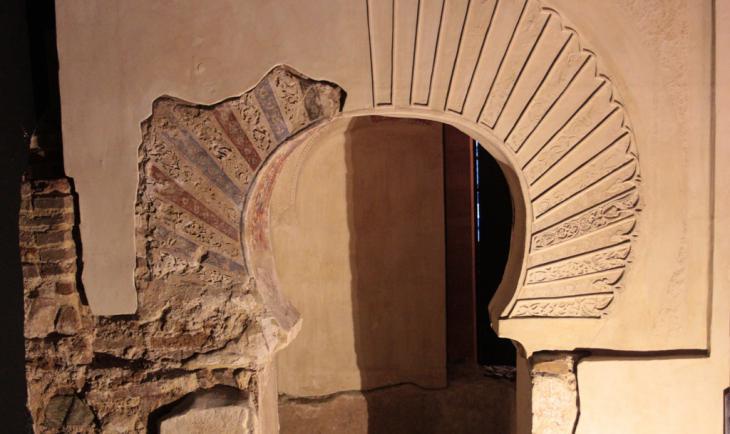 Remains of a mihrab niche in the cellar of San Juan de Dios church in Ibn Arabi′s hometown of Murcia. At the time of Ibn Arabi′s birth in 1165, it was the site of Murcia′s principal mosque

The uniqueness of Ibn Arabi′s writings lies in their ″universality and breadth, coupled with an astonishing penetration into the central issues of human experience. Few people can claim to have read more than a portion of these works, and even fewer would be bold enough to claim to have understood them″, writes the British Ibn Arabi researcher Stephen Hirtenstein in his biography of the Shaykh al Akbar (″The Unlimited Mercifier″).

It was in today′s Spain that this rich philosophical-esoteric heritage took root. Nevertheless, there is not a single street sign that bears witness to the fact that Ibn Arabi spent 27 years of his life there. Born in 1165 in the south-eastern Spanish city of Murcia, he moved to Seville with his father at the age of seven. Andalusia′s biggest city played a crucial role in Ibn Arabi′s personal development into a mystic.

Under the caliphate of the Almohads, Seville had become a melting pot of cultures, in which poets, philosophers, saints, theologians and laymen mixed freely. Ibn Arabi grew up in this cosmopolitan environment. At a young age he showed clairvoyant abilities, gave accounts of visions and frequently retreated into the solitude of old ruins.

As a youth he studied the Koran and Hadith and mingled with spiritual masters and shaykhs, among which were both men and women. During his later years he spent time in Mecca and Anatolia, finally dying in Damascus in 1240 at the age of 75. His grave, situated in a suburb of the Syrian capital, is an important pilgrimage site.

Yet, how can it be that practically no-one in Seville these days would link their city to Ibn Arabi? Gracia Anguita, a researcher on Islamic mysticism for several years, wrote a doctoral thesis on Ibn Arabi′s works at the University of Seville. ″Many Spaniards are aware that much of their cultural achievement stems from the Islamic era. But the important personalities of Andalusian culture such as Ibn Arabi have not yet found their way into collective Spanish memory.″ Another reason could be that, being written in Arabic, Ibn Arabi′s works are not as accessible as others.

Gracia Anguita′s interest in mysticism began when she read the esoteric teachings of Kabbalah and Baroque Spanish Christianity. At university she encountered Ibn Arabi′s works and began researching about him. ″What fascinates me is the wisdom he applies to every topic, his understanding of the universe and life, in which every physical reality is connected to a spiritual one.″ 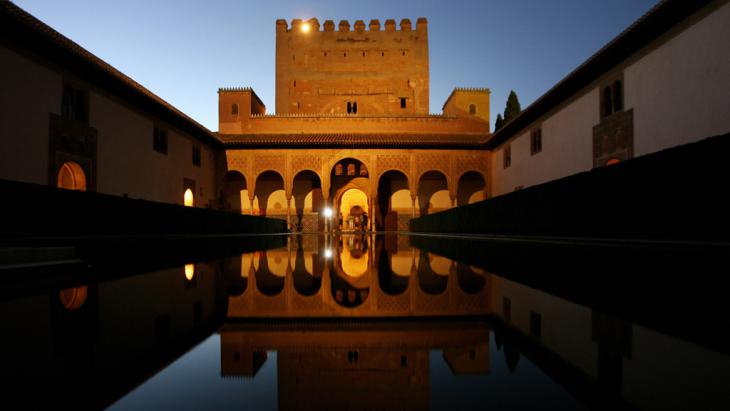 The breathtaking sophistication of Al Andalus: architectural masterpieces such as the Alhambra in Granada or the Mezquita in Cordoba bear witness to this development, as do the achievements of philosophers such as the Islamic thinker Averroes and his Jewish colleague Maimonides

While working on her doctoral thesis, Anguita was the only PhD candidate working on Ibn Arabi in Spain. In her eyes, the study of Sufism is neglected in Spanish universities. ″Only a few researchers are engaged in outstanding work on Ibn Arabi.″ Still she believes that Ibn Arabi′s heritage is destined to be re-discovered by an increasing number of people.

What characterises Ibn Arabi′s teachings is their universalism. It is not only the Koranic and prophetic traditions of Islam, which Ibn Arabi presents in a new light to reveal their inner meaning, but also the religious philosophy of Judaism and Christianity.

A multi-faceted approach and a wholeness of perspective are two important features of Ibn Arabi′s thought – when he writes, for instance, about the unity of reason and intuition. Ibn Arabi merges apparent opposites into a harmonic whole and sheds light on many problems that are as urgent in today′s world as they were in his own times.

Ibn Arabi is often associated with the notion of ″vahdat al vujud″ (usually translated as ″unity of existence″), although his works do not contain any description of this concept. What is meant here is the existence of an all-encompassing principle that includes all seemingly contradicting convictions and doctrines.

The spirit of Al Andalus

This results in a natural tolerance as expressed in Ibn Arabi′s famous verses, ″My heart has become capable of every form / it is a pasture for gazelles and a convent for Christian monks / and a temple for idols and the pilgrim′s Kaa′ba / and the tables of the Torah and the book of the Koran.″

In a simple and aesthetic way, Ibn Arabi′s words reflect the spirit of Al Andalus, a place that epitomised the peaceful coexistence of different religions and world views. Instead of being antagonists, science and religion co-operated in Moorish Spain, producing an astonishingly sophisticated civilization. The culture of Al Andalus was the envy of the rest of Europe.

Architectural masterpieces such as the Alhambra in Granada or the Mezquita in Cordoba bear witness to this development, as do the achievements of philosophers such as the Islamic thinker Averroes and his Jewish colleague Maimonides, both contemporaries of Ibn Arabi. Many of the ideas that later found their way into the European Renaissance took shape in Al Andalus.

But after centuries of Christianity as the dominant identity, many in Spain are uneasy with their Moorish heritage, not seeing it as a part of their own culture.

In this anniversary year, the seventh international Ibn Arabi symposium was held in Ibn Arabi′s birth city Murcia in May, organised by the Spanish branch of the International Muhyiddin Ibn Arabi Society (MIAS). But Murcia, too, is a long way from including Ibn Arabi into the city′s heritage for all visitors to see.

No official celebration was held in Spain to commemorate his 850th birthday. And yet, in today′s divided world, we could all do with remembering Ibn Arabi′s teachings of unity.

Turkish author and journalist Mustafa Akyol is one of the foremost pioneers of an Islam reconciled with modernity. Musa Bagrac spoke with Akyol for Qantara.de about his new book " ... END_OF_DOCUMENT_TOKEN_TO_BE_REPLACED

A bird's eye view of eight hundred years of history: Brian A. Catlos tells the story of Al-Andalus in the style of a streaming series and deconstructs the myths of the Reconquista ... END_OF_DOCUMENT_TOKEN_TO_BE_REPLACED

Known to Jews, Muslims, and Christians by three different names – Sefarad, al-Andalus, and Hispania, respectively – the Iberian Peninsula has been a centre of fertile intellectual ... END_OF_DOCUMENT_TOKEN_TO_BE_REPLACED

A heated debate is raging in the Islamic world about whether the religious and political spheres in Islam are one and the same. Before this matter can be settled, the terms " ... END_OF_DOCUMENT_TOKEN_TO_BE_REPLACED

On their fourth CD "Irade" (willpower), Masaa has left its piano sound behind, yet continues with its new guitarist to pursue a path that bridges jazz improvisation and Arabic ... END_OF_DOCUMENT_TOKEN_TO_BE_REPLACED

Muhyiddin Ibn Arabi (1165-1240) is one of the most influential Arab philosophers and mystics. James Morris, Professor of Islamic Theology at Boston College, explains why his ... END_OF_DOCUMENT_TOKEN_TO_BE_REPLACED
Author:
Marian Brehmer
Date:
Mail:
Send via mail

END_OF_DOCUMENT_TOKEN_TO_BE_REPLACED
Social media
and networks
Subscribe to our
newsletter