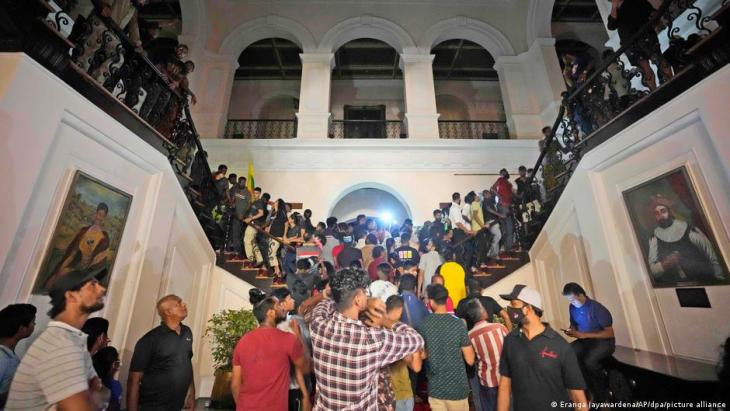 Sri Lanka’s President Gotabaya Rajapaksa has informed Prime Minister Ranil Wickremesinghe that he will resign, the prime minister’s office said on Monday, after tens of thousands of protesters stormed the official residences of both men.

After Saturday’s sweeping protests in the wake of a debilitating economic crisis, the speaker of parliament said Rajapaksa would resign on Wednesday. However, there has been no direct word from Rajapaksa on his plans.

Wickremesinghe has said he would also step down to allow an all-party interim government to take over.

Leaders of the protest movement have said crowds would keep occupying the residences of the president and prime minister in Colombo until they finally quit office.

Colombo, Sri Lanka’s largest city, was calm on Monday as hundreds of people strolled into the president’s secretariat and residence and toured the colonial-era buildings. Police made no attempt to stop anyone.

“We are not going anywhere till this president leaves and we have a government that is acceptable to the people,” said Jude Hansana, 31, who has been at a protest site outside the residence since early April.

“The people’s struggle is for wider political reforms. Not just for the president to leave. This is just the start.”

Another protester, Dushantha Gunasinghe, said he had travelled to Colombo from a town 130 km (80 miles) away, walking part of the way because of the fuel crunch. He said he finally reached the capital on Monday morning.

“I’m so exhausted I can barely speak,” said the 28-year-old as he sat on a plastic chair outside the president’s office. “I came alone all this way because I believe we need to see this through. This government needs to go home and we need better leaders.”

Rajapaksa and Wickremesinghe were not in their residences when the protesters surged into the buildings and have not been seen in public since Friday. Their whereabouts are unknown.

Wickremesinghe’s private home in an affluent Colombo suburb was set on fire, and three suspects have been arrested, police have said.

Constitutional experts say once the president and prime minister formally resign, the next step would be for the speaker to be appointed as acting president and for parliament to vote for a new president within 30 days to complete Rajapaksa’s term that was to end in 2024.

Sri Lanka’s opposition parties met Sunday to agree on a new government, a day after the president and prime minister first offered to resign.

Ranjith Madduma Bandara, a top official in the main opposition United People’s Force, said that separate discussions were held with other parties and lawmakers who broke away from Rajapaksa’s ruling coalition and more meetings were planned. It was unclear when an agreement might be reached.

Another opposition lawmaker, M. A. Sumanthiran, said earlier that all opposition parties combined could easily muster the 113 members needed for a majority in Parliament.

Ordinary Sri Lankans have mainly blamed Rajapaksa for the collapse of the tourism-dependent economy, which was hammered badly by the COVID-19 pandemic and a ban on chemical fertilisers that was later reversed.

Government finances were crippled by mounting debt and lavish tax breaks given by the Rajapaksa regime. Foreign exchange reserves were quickly depleted as oil prices rose.

The country barely has any dollars left to import fuel, which has been severely rationed, and long lines have formed in front of shops selling cooking gas. Headline inflation in the country of 22 million hit 54.6 percent last month, and the central bank has warned that it could rise to 70 percent in the coming months.    (France24/Reuters/AP)

More on this topic
Which country will be next? Lebanon and Sri Lanka share economic collapseQantara photo essay: Sri Lanka: in search of a drop of petrolNational strike in Sri Lanka to demand govt step down
Home
Print
Newsletter
MoreAll Topics

END_OF_DOCUMENT_TOKEN_TO_BE_REPLACED
Social media
and networks
Subscribe to our
newsletter