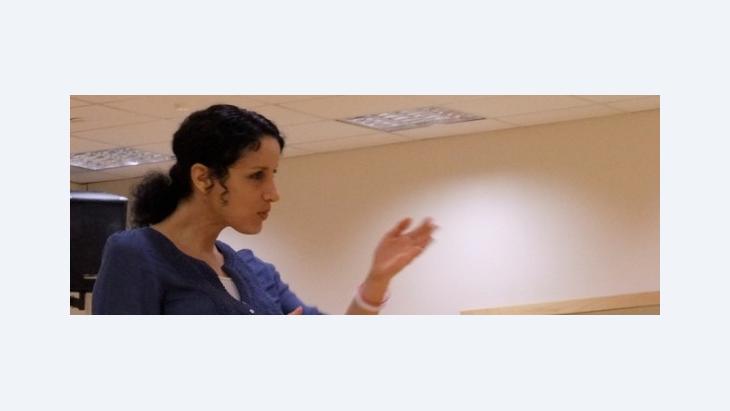 Stand-up Comedy in Dubai
Clean Humour for the Arab World

﻿Stand-up comedians have a reputation for using provocative and often political jokes. Not to be daunted by this apparent obstacle to success, an American and an Emirati are trying to create a stand-up scene in the conservative Arab Gulf states. Through their Dubai comedy school, they promote a clean brand of humour. Christoph Dreyer reports

"Waaaah!" "Haaah!" "Uuuuh!" "Wooooh!" Using big gestures, Mina Liccione yells at her neighbour, who quickly turns around and shouts into his other neighbour's face. The round continues in this manner until it is complete. Liccione calls this a "scare round"; each participant has to scare his neighbour. "Go, go, go," she cheers until the round is finished, and the group breaks into laughter and applause.

It's early Saturday afternoon in a windowless room with mirrored walls at the Dubai Community Theatre and Arts Centre, located on the outskirts of the city's labyrinthine Mall of the Emirates. Liccione, a tall, slender American with long curls, is directing the warm-up exercises in one of her weekly classes.

The group is as diverse as Dubai's population: an Indian with rimless round glasses that give him an intellectual look, a British woman in a tank top, a broad-shouldered American, two Arab women with headscarves ... there are seven women and eight men in all, eagerly following Mina's instructions for improvisation, pantomime, and fill-in-the-blank exercises. 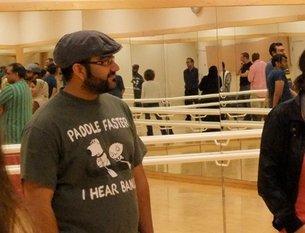 "I don't know if the audience is ready to discuss these things on stage yet; I think right now the audience just wants to laugh." - Emirati stand-up comedian Ali Al Sayed

​​Liccione, who has toured the US and internationally with dance and theatrical circus shows like "Stomp", first came to Dubai with a physical comedy program in 2007. After her first show here, she scratched the program because she realised that what would have worked back in the US didn't work in Dubai. "So every show I added a new piece that I thought would work with the audience," recalls Liccione, "and by the end of the two weeks I had a great show for here."

After that first contact, the Community Theatre asked her to return and start a comedy school. In early 2008, Liccione launched Dubomedy, which according to her is the Middle East's first and only comedy school. Today, along with her Emirati colleague Ali Al Sayed, she teaches tap-dance, improvisation theatre, writing and performance, and not least stand-up comedy – the prototypically American art of the fast-paced, solo stage performance based on jokes, humorous stories and one-liners – to some 150 people per season.

"It took us over a year to convince a venue to have regular comedy nights," says comedian, master of ceremonies, actor, producer and director Al Sayed, recalling the difficult beginnings of their project. Apart from that, the mainly English-speaking audience was at first sceptical how stand-up as they knew it from the US was supposed to work in a conservative Muslim country. "We kind of had to re-create the image of stand-up comedy, that it can be for families and can be appropriate, and it can still be very, very funny," says Liccione.

Taboos as catalysts of creativity

She makes this point more than clear in class too: swearing, sex and politics are taboo on stage, Liccione lectures in between two exercises. "You're in Dubai, there's certain things we do not talk about here. Here it's clean humour. Now a lot of people are like: stand-up comedy and I can't swear?! I can't talk about sex?! Well, what else is funny? No," she says, now almost shouting. "That is relying on cheap jokes! By not using that you have to be much more creative, and your work is going to be so much more rich." 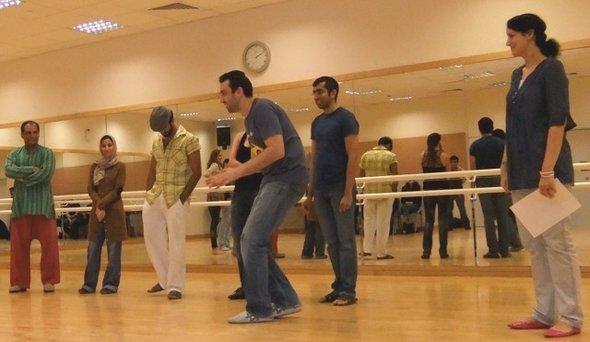 Re-creating the image of stand-up comedy: At Dubomedi, the Middle East's first and only comedy school, swearing, sex and politics are taboo on stage

​​The Dubomedy team have never had trouble with censorship, nor are they keen to try and provoke any. For them, this is not so much about the authorities as about the audience and their values. "If the people do not like the kind of comedy that you're doing, then you're not going anywhere, and that's what it really is about for us," says Al Sayed. "I do push the envelope sometimes, and sometimes I say things that could mean something else. But as a comedian you have to be smart, you have to know how you play it."

According to Emirati-born Al Sayed, comedy has been present in Arab movies and theatre for a long time. Much of it, however, has tended to imitate the classics of the genre, which still date from the black-and-white era. "What we are hoping to do is to give Arabs a different format to start working with."

So far, Dubomedy's performances are still in English, but Al Sayed has also started one-on-one classes with some of their students, working on programs in Arabic with them.

"Doing stand-up in Arabic is definitely the next wave," says Liccione. But it isn't as easy as translating the English jokes and punch lines into Arabic. "It sometimes doesn't translate. Ali, for example, can't do his English material in Arabic. It just simply doesn't mix." This is why they first lay the groundwork in English in their classes, she explains. "It is an American-based art form, so you have to study it as it's meant to be."

Message between the lines

Al Sayed is convinced that the Arab-speaking public is starting to catch on. He recalls a performance a few months ago. "I have a joke where I ask, are there any locals in the audience, and I usually don't have a response. But at that show a very big percentage of the audience started yelling," he says. "I think we're reaching to that category of people, the locals, which is what we wanted to achieve in the first place."

Even if Dubomedy does steer clear of politics, Al Sayed does eventually want to bring about a change through his work. His hero, he says, is African-American comedian Chris Rock, who became famous with explicit jokes about racial issues and has won several Emmys. However, what counts is not Rock's supposedly dirty language, insists Al Sayed, but what he says between the lines.

"He talks about society and about people, his people, African Americans. That's the kind of comedian I want to be," he points out and adds, "I don't know if the audience is ready to discuss these things on stage yet; I think right now the audience just wants to laugh. But eventually, yes, I want to go on stage and make a difference and really have meaning behind what I am saying."

United Arab Emirates strongman Sheikh Mohammed bin Zayed al-Nahyan, who was formally elected president on 14 May, has led a realignment of the Middle East, creating a new anti- ... END_OF_DOCUMENT_TOKEN_TO_BE_REPLACED

Back in 1995, when The Times asserted Islam was to blame for the poor levels of education among women in the Muslim world, Mohammad Akram Nadwi began scouring ancient Arabic ... END_OF_DOCUMENT_TOKEN_TO_BE_REPLACED

Women's empowerment in the Gulf has become a tool of deflection, rather than a genuine effort to promote women’s full and equal participation in society. By Mira Al-Hussain END_OF_DOCUMENT_TOKEN_TO_BE_REPLACED

Indonesia has become a primary battleground between democratic and autocratic visions of Islam in the 21st century, with Nahdlatul Ulama pitted against Abdullah bin Bayyah, a ... END_OF_DOCUMENT_TOKEN_TO_BE_REPLACED

A straightforward message emerged from last week’s meeting in the Negev desert of the foreign ministers of four Arab countries, Israel and the United States: Israel is key to the ... END_OF_DOCUMENT_TOKEN_TO_BE_REPLACED

Ahead of Ramadan, most Middle Eastern countries have eased restrictions to near pre-pandemic times. However, increases in prices and food shortages due to the war in Ukraine are ... END_OF_DOCUMENT_TOKEN_TO_BE_REPLACED
Author:
Christoph Dreyer
Date:
Mail:
Send via mail

END_OF_DOCUMENT_TOKEN_TO_BE_REPLACED
Social media
and networks
Subscribe to our
newsletter