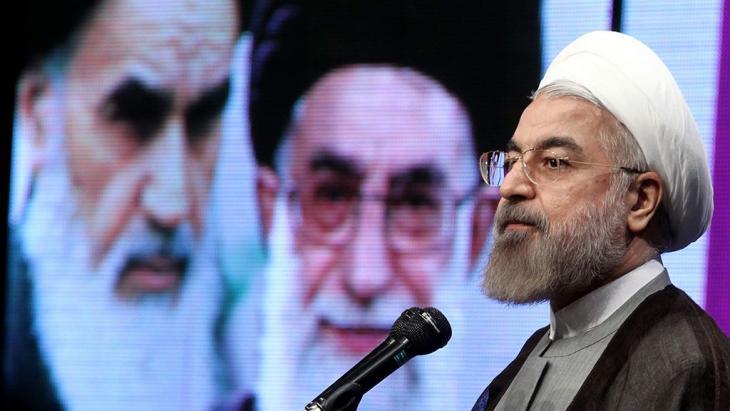 State and religion in Iran

"Shias tend to support the underdogs"

The Shia faith has always been a defining aspect of Iranian nationhood. In the twentieth century, the pro-Western regime of Shah Mohammad Reza Pahlavi silenced critics and was eventually toppled by a popular revolution with strong religious dimensions in 1979. Tehran's stance has since been basically anti-Western, but that may now be changing. Maysam Behravesh, a political analyst with Tehran Bureau, assessed the nature of the Shia regime in an interview with Hans Dembowski

Iran has reached an agreement on nuclear non-proliferation with the permanent members of the UN Security Council and Germany. Who has prevailed within the regime?

Maysam Behravesh: Many commentators attribute the success in the negotiations to the economic sanctions, which indeed hurt the whole country. That effect cannot be ruled out. I think, however, that there was a shift of power from hardliners to moderates in Tehran when Hassan Rouhani was elected president in 2013. The hardliners were not much interested in opening up. Their power rests to a great extent on rigid, uncompromising anti-Westernism. The moderates, on the other hand, have long been interested in rapprochement with the West. Mohammed Khatami, who was president from 1997 to 2005, took a similar stance to Rouhani now.

But Khatami did not prevail in office.

Behravesh: No, he did not, and Washington is to blame, because US President George W. Bush refused to co-operate with Khatami. He preferred to speak of an "axis of evil", which also included Iraq and North Korea. The irony of the matter was that the Khatami administration supported US military action against the Taliban in Afghanistan in the wake of 9/11 attacks.

Indeed, Tehran was a supporter of the Afghan Northern Alliance, the guerrilla front that was still holding out against the Taliban in 2001. The Taliban had kidnapped and killed several Iranian diplomats and a journalist in 1998, so Iran deployed around 70,000 troops along the Afghan border but stopped short of invading Afghanistan. After the terror attacks on New York and Washington on 11 September 2001, Khatami saw common cause with the USA.

But in Bush's rhetoric, Iran became a member of the axis of evil. Iranians were very disappointed. They remembered, of course, that Iraq's dictator Saddam Hussein had waged a long and bloody war against Iran in the 1980s, and the USA and other Western powers had supported him. They also remembered that the rise of the Taliban in Afghanistan was initially supported by the USA and allies like Saudi Arabia. Bush snubbed Khatami consistently and thus delegitimised the reformist foreign policy in the eyes of Iranian decision-makers. Hardliner Mahmoud Ahmadinejad won Iran's next presidential elections in 2005. 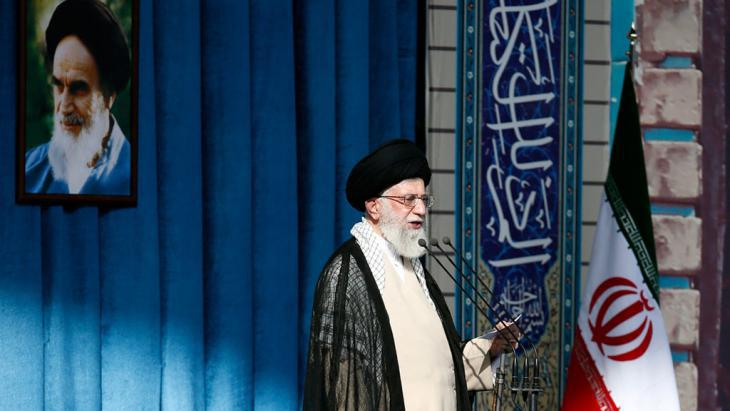 Earlier this week, Iran's Supreme Leader Ayatollah Ali Khamenei (pictured here) said that Iran will remain closed to US influence and continue to oppose US policies in the Middle East after its nuclear deal with big powers, noting either country can still block the accord

What factions are there inside the Iranian regime?

Behravesh: Well, the regime is not a monolithic block, but it is not composed of well-defined factions either. It includes several camps: hardliners, moderates, reformists, traditional conservatives. These camps revolve around various leaders. Alliances and alignments keep shifting, with new groups emerging from time to time and others dissolving. Some camps are close to the military, or the revolutionary guards, or the business community etc.

But doesn't Ayatollah Ali Khamenei, the supreme religious leader, have the final say?

Behravesh: In theory, he does, but practically, he has one voice among others. His is certainly a very important voice, but he is not the only decision-maker. Consider, for example, that the nuclear talks were going nowhere for years when Ahmadinejad was president, and that Rouhani's administration concluded a deal in two years. Khamenei was the supreme leader throughout this period, and policy changed dramatically.

Shortly after the agreement was reached, however, Khamenei reiterated that the USA remained an enemy and that Iran would stand by its regional allies such as Hamas, Hezbollah, the Assad regime in Syria or the Houthi rebels in Yemen.

Behravesh: Yes, but one must not over-emphasise what that means. For one thing, Khamenei was reassuring his hard-line base at home. For another, he was sending a message to Iran's allies in the region. What the supreme leader says, moreover, is not exactly what the government does in practice. 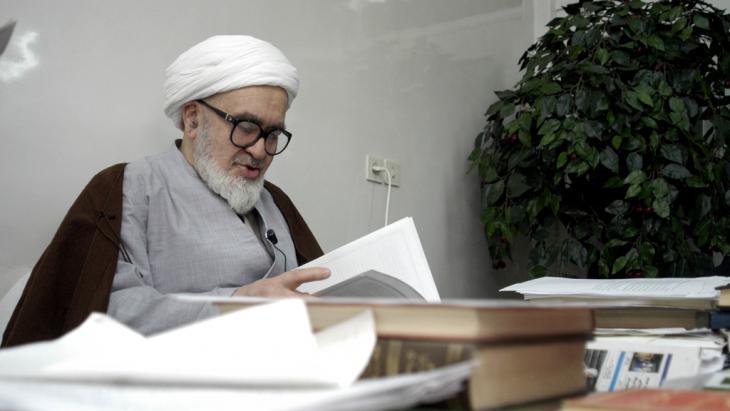 According to Maysam Behravesh, Grand Ayatollah Hussein Ali Montazeri (pictured here) was expected to become the supreme leader after Ayatollah Ruhollah Khomeini, who had led the revolution in 1979, "but he was sidelined. Some have called him the 'father of human rights in Iran'". Montazeri died in December 2009 in Qom

Shia Muslims have an organised clergy. Is there a single top leader in Iran or internationally?

Behravesh: No, there is not. The grand ayatollahs occupy the highest level of religious authority. There are several of them, and Shia Muslims are expected to emulate them. Rouhani and Khatami are mid-ranking clerics. They have some religious authority, but not like the ayatollahs.

Do the ayatollahs disagree among one another?

Behravesh: Yes, they do. Ayatollah Hussein Ali Montazeri, for example, was far more tolerant on many issues than Ayatollah Khamenei is. Montazeri was expected to become the supreme leader after Ayatollah Ruhollah Khomeini, who had led the revolution in 1979, but he was sidelined. Some have called him the "father of human rights in Iran". Religious differences among the ayatollahs tend to become prominent when they have political implications, for instance, when they concern women's rights and gender relations. Many things are in flux, and religious authorities need to adapt themselves to the emerging requirements of modern life. There is currently a growing trend in big Iranian cities of couples living together in cohabitation without being married. Some clerics vehemently oppose it; others are more tolerant.

Isn't the abuse of human rights a reason for the West to keep a distance?

Behravesh: Well, things are not better in Saudi Arabia. Nor were they much better under the Shah. Western governments are allied to many despotic regimes.

Let's return to the ayatollahs, do faith-leaders from other countries disagree with the Iranian clergy?

Behravesh: Well, one can detect a sense of competition among Islamic religious authorities internationally, and obviously the religious leaders take into account the political and socio-economic context they live in. It is no coincidence, for example, that Iraq's top Shia leader, Ayatollah Ali al-Sistani, takes a much more conciliatory approach towards peaceful co-existence with Sunnis. Unlike Iran, Iraq is in danger of being torn apart by the Shia–Sunni schism. 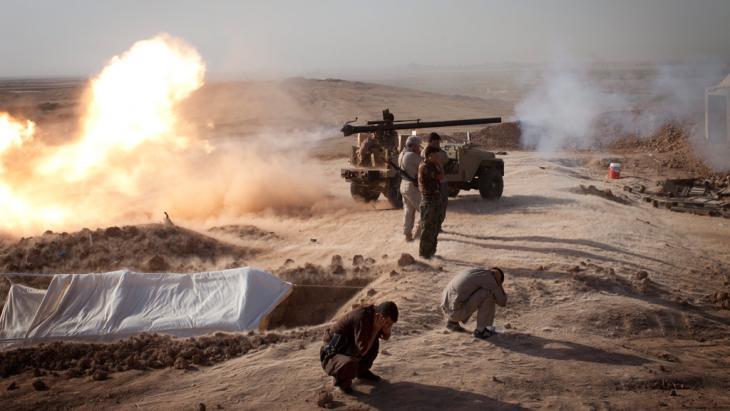 "Iran cannot invest as massively in conventional military as Saudi Arabia and other Gulf Cooperation Council (GCC) members do. Support for proxies such as Hamas and Hezbollah, as well as Shia militias in Iraq or Houthis in Yemen, is thus considered part of Iran's defence doctrine," says Maysam Behravesh. Pictured here: Shia militiamen fighting against IS in Iraq

So there is no united Shia front against Sunnis?

Behravesh: Actually, I don't think it is analytically accurate or even politically helpful to see regional developments in terms of sectarian rivalries between Shias and Sunnis, but Shias know that there can hardly be any peace with Sunni extremists like the Islamic State (IS). These groups, after all, have explicitly proclaimed that Shias are not true Muslims and should be fought. They keep attacking Shias violently. Making matters more difficult, their ideology is rooted in Wahhabism, the rigidly fundamentalist Sunni doctrine of Saudi Arabia. These forces are hostile to Iran, a Shia powerhouse.

Iran and the USA are informal allies in the fight against IS in Iraq. Some Western observers are uncomfortable with this setting, since Iran is also allied to Hamas and Hezbollah, two outfits that are considered terrorist.

Behravesh: Viewed from Tehran, this is not simply about ideology. There is an important security and realpolitik angle. Iran cannot invest as massively in conventional military as Saudi Arabia and other Gulf Cooperation Council (GCC) members do. Support for proxies such as Hamas and Hezbollah, as well as Shia militias in Iraq or Houthis in Yemen, is thus considered part of Iran's defence doctrine.

What about Iranian hostility towards Israel, isn't that something to worry about?

Behravesh: Again, it is necessary to see things in context. In the past three decades, Iran's regime has adhered to enmity with the USA and Israel. An important reason is that both countries were close allies of the Shah regime. Israel's secret service Mossad co-operated closely with SAVAK, the Shah's secret police. The Shah's repression of revolutionaries was brutal; many opponents were killed. Many members of Iran's current political elite were in prison, many were tortured. As the relationship with the USA improves, however, hostility towards Israel is becoming more important.

Behravesh: First of all, politically, it helps to sustain the revolutionary image, and cultivating animosity towards a foreign enemy can deliver domestic benefits. Second, ideologically, Shias have been in the minority throughout history and tend, as the Islamic Republic does, to support the underdogs, which in this case are perceived to be Palestinians. Finally, support for Palestinians serves a political-psychological function in confrontation with Iran's Arab rivals. Iran casts itself as the leader of Muslim community, highlighting the fact that Arab regimes have let the Palestinians down. The irony of the matter, however, is that Palestinians have been trying to make peace with Israel for a long time, and Tehran's anti-Israel stance is often more rabid that that of Palestinians.

Maysam Behravesh is a co-founder of the new Center for Middle East Research (CMER) in London, and a political analyst at Tehran Bureau, an independent news organisation hosted by the British daily newspaper "The Guardian". He is currently completing a PhD in political science at Lund University in Sweden.

The anti-Israeli Quds Day did not take place this year – a first both for Iran and Lebanon's Hezbollah. While Hezbollah leader Nasrallah sees his organisation in a state of siege ... END_OF_DOCUMENT_TOKEN_TO_BE_REPLACED

While "Daughters of Smoke and Fire" – Kurdish author Ava Homa's heart-rending debut novel – is about Leila, a young Kurdish woman, coming of age in contemporary Iran, the ... END_OF_DOCUMENT_TOKEN_TO_BE_REPLACED

Over ten years after the publication of "Censoring an Iranian Love Story", Shahriar Mandanipour's latest novel, "Moon Brow", is now available in German translation. This is a ... END_OF_DOCUMENT_TOKEN_TO_BE_REPLACED

Saudi Arabia has spent the past five years fighting off Iran-backed Shia rebels in a seemingly endless conflict that has cost more than 100,000 lives and left 80% of the ... END_OF_DOCUMENT_TOKEN_TO_BE_REPLACED

Saudi Arabia has called on Muslims across the world to put their hajj preparations on hold for the time being. The corona pandemic is impacting one of the central pillars of ... END_OF_DOCUMENT_TOKEN_TO_BE_REPLACED

According to the latest Reuters tally, more than 2.54 million people are now reported to have been infected by the novel coronavirus globally and 177,004 have died. As Muslims ... END_OF_DOCUMENT_TOKEN_TO_BE_REPLACED
Author:
Hans Dembowski
Date:
Mail:
Send via mail

END_OF_DOCUMENT_TOKEN_TO_BE_REPLACED
Social media
and networks
Subscribe to our
newsletter