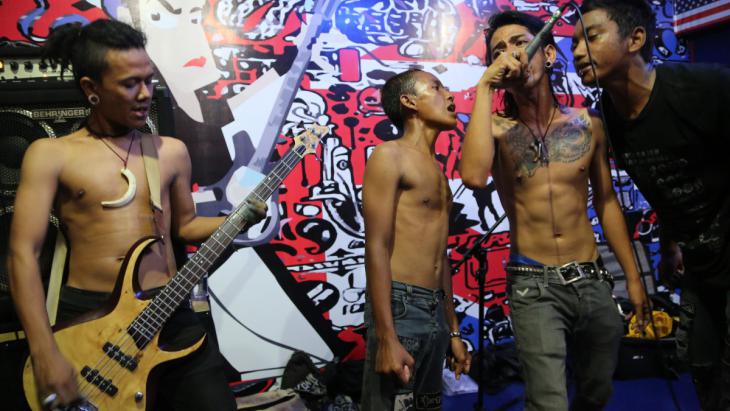 The acclaimed documentary ″Street Punk! Banda Aceh″ is the work of film-maker and journalist Maria Bakkalapulo and her producer partner Niall Macaulay. This heart-breaking yet empowering film reveals how young people are striving to hold on to their identities and fight for freedom in the face of religious stricture and fierce opposition. Interview by Richard Marcus

You are both a journalist and a film maker – what led you into those fields?

Maria Bakkalapulo: My degree proved incredibly useful when I began pursuing a career in journalism, documenting social issues around the world through music. I eventually ended up in Asia, living in Bali for four years. This is how I learned about the punk community. It all began in Jakarta, where I would go to insane punk gigs where people from all economic levels would thrash and stage dive to their heart′s content. What really inspired me about punks in Indonesia was how it allowed the marginalised to find a community, a purpose and identity. On the rough streets of Jakarta, it gave them protection and friendship.

At the end of 2004, I went to Banda Aceh to cover the devastating effects of the tsunami. I followed events there for years after, travelling back from time to time to work on stories. Then the 65 punks were arrested in December 2011, had their mohawks shaved and were forced to bathe in a lake because they were seen as unclean. Our film ″Street Punk! Banda Aceh″ talks about the evolution of this community and where they are now.

After the media covered their dramatic arrest, we wanted to find out what happened to them next. We connected with them on social media and then travelled out to Banda Aceh to film their daily struggle. The film goes into that, giving an intimate picture of some of the key members of the punk community there. They are truly some of the most committed punks I′ve ever met, with the deep determination to stand up for freedom of thought and expression. I have always been drawn to music that inspires change and punk is the definition of resistance, so it wasn′t hard for me to get incredibly interested in them.

Back in 2008 I reviewed a documentary called ″Sumatran Folk Cinema″ which was shot in Aceh and Banda Aceh prior to the tsunami. The movie showed the diversity of musical expression prevalent in the region. How has that changed since then?

Bakkalapulo: When you are talking about all music in Banda Aceh, the capital of the province Aceh, then you are looking at a complex subject. To put it simply, Aceh has always been a devout province within Indonesia, they see themselves as the ′verandah of Mecca′. It is believed that Islam was introduced there by itinerant Sufi traders from Gujarat.

The Acehnese are very proud of this. They have a strong identity, so much so, that in the past they have attempted to gain their independence from Indonesia. In the film we mention the civil war between the Indonesian military and the Free Aceh Movement (GAM) which took place between 1976 and 2005. A peace agreement was only reached after the deadly tsunami.

In the aftermath, many Acehnese felt they needed to go deeper in their faith to understand why such a tragedy had happened. Many people felt they had done something wrong for disaster to have befallen them, so they became even more devout, adopting a strict form of Sharia law. Life in Aceh became more restrictive and anything deemed as entertainment – from films to music – was treated with suspicion.

Slowly traditional and popular music began to decrease, replaced by religious-inspired music. Punks were seen as a social disease and even though they had a strong scene before the tsunami, they were targeted afterwards. Many from the punk community actually died in the tsunami too. This is what the film examines and what the punks have to endure.

What is the history of punk in Indonesia in general and Banda Aceh specifically?

Bakkalapulo: Punk spread throughout the archipelago. Punks have always had a huge network. In the 90′s, it was tape sharing, now it is social media. The best way to get an idea of the history of punk in Indonesia is to refer to the article I wrote for Time Magazine.

Is punk in Banda Aceh just about the music or is there more to it than that? 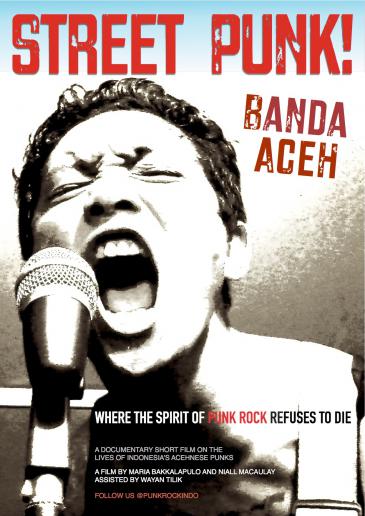 At odds with political and religious dogma around the world, punk is the utmost in freedom of expression. In Indonesia′s strictly Muslim Aceh, punks are classed as a ′social disease′ – life would be easier if they conformed, yet this small community is determined to survive

Bakkalpulo: The music is amazing, edgy and raw – punk in its truest form. You can hear exclusive ″Street Punk! Banda Aceh″ recordings of their music on Soundcloud.

You talk about the punks′ musical influences (The Clash, Sex Pistols etc.), but has there been anything else?

Bakkalapulo: Sure, punks are influenced by loads of music, even Metallica and Green Day. They listen to everything and now with the Internet and social media, they have access to the world.

In Street Punk you focused specifically on the Banda Aceh region – why?

Bakkalapulo: We were documenting punks in Java, but felt the situation for the punks in Banda Aceh was more dire. We felt we needed to give them a voice, so we did.

When an attempt was made to impose a strict interpretation of Sharia law, including banning music, in Northern Mali, they said it was to crack down on the crime associated with public performances. Have they used the same sort of excuse for cracking down on the punks in Banda Aceh – a threat to the common good?

Bakkalapulo: Yes, of course, punks are seen as criminals with bad morals. The film addresses this topic. Locals claim that punks thieve and have a negative influence on the Aceh youth. The punks are scapegoats. When they do have shows, local law enforcement and military units are almost always present or nearby.

Indonesia is a Muslim country, yet in most places it seems like the country′s history of musical and cultural diversity thrive – why has the government in Banda Aceh been able to impose such a strict interpretation of Sharia law?

Bakkalapulo: Aceh enjoys special regional status within Indonesia; it makes a lot of its own rules.

At one point during the film you were forced to shut off your cameras by police – what other difficulties did you run into when filming?

Bakkalapulo: It was always tense. We were always being followed and photographed by intelligence operatives. The punks are seen as a menace, but they get media attention so they are an even bigger threat. They bring negative attention to the province, so the authorities just want rid of them.

I noticed there were very few young women among the punks you filmed. Is this because of the restrictions placed upon the genders mixing in public in this region, or is punk primarily a male thing in Indonesia?

Bakkalapulo: There are definitely restrictions on the two mixing. But some female punks do exist and they are fantastic. They are a big force behind the punks′ efforts to feed the poor and have a positive impact on society. We decided not to profile them too heavily in the film – flouting gender restrictions, either in the way you dress or simply by associating with the opposite sex outside of marriage or family, can bring severe penalties.

While the movie isn′t available on DVD, those interested can view it online for a nominal fee, collected in support of the young people featured in the film.

Water buffalo and oxen have been part of the work in Indonesian fields for centuries. But the draught animals are no strangers to sport either, as can be seen in two traditional ... END_OF_DOCUMENT_TOKEN_TO_BE_REPLACED

According to the latest Reuters tally, more than 2.54 million people are now reported to have been infected by the novel coronavirus globally and 177,004 have died. As Muslims ... END_OF_DOCUMENT_TOKEN_TO_BE_REPLACED

Around the Islamic world, lockdowns and curfews are being extended and religious ceremonies are being cancelled outright in the hope of slowing the spread of COVID-19. Here’s the ... END_OF_DOCUMENT_TOKEN_TO_BE_REPLACED

While some are beginning to protest the lockdown, others are unable to bury their loved ones in accordance with Islam. Here’s the latest from across the region END_OF_DOCUMENT_TOKEN_TO_BE_REPLACED

Coronavirus continues unabated. Iran remains a hub of infection, war-torn Syria has recorded its first case and Yemen is bracing itself for the worst. Here’s the latest from ... END_OF_DOCUMENT_TOKEN_TO_BE_REPLACED
Author:
Richard Marcus
Date:
Mail:
Send via mail

END_OF_DOCUMENT_TOKEN_TO_BE_REPLACED
Social media
and networks
Subscribe to our
newsletter