Violence is escalating in Darfur in western Sudan and in eastern Chad. Although both conflicts have very different origins, they are mutually fuelling aggression on both sides of the border. Marc Engelhardt reports 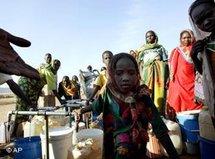 More than 220,000 Darfuris and 100,000 displaced Chadians are in camps in the Chadian border region, still not safe from Janjaweed attacks

​​The militia came dressed in army uniforms and riding camels and horses; the attack was swift and merciless. On a single Sunday at the end of October, the Janjaweed killed at least 63 civilians, 27 of whom were children under the age of 12.

Observers from the African Union report that the Arab mounted militia, which is being armed by Sudan's government, hit eight targets: villages and refugee camps in the extreme west of Darfur, the stronghold of the National Redemption Front, the alliance of rebels that did not support the peace accord signed in May 2006.

On the other side of Sudan's porous western border, in eastern Chad, fighting has been escalating again for a few weeks. Since the first week of November alone, over 200 people lost their lives in attacks perpetrated by mounted militia on villages in the border region.

Moreover, rebels have been marching on the Chadian capital, N'Djamena, for several days now with a view to toppling the unpopular president, Idriss Deby. An initial putsch attempt in April failed.

Beyond the peace accord

The jubilation that was heard in Nigeria's capital, Abuja, on 5 May, when at least the largest faction of Minni Minnawi's Sudanese Liberation Army (SLA) signed the peace agreement that had painstakingly been negotiated over a period of two years, has long since been drowned out by the thunder of war.

"It is hard to believe, but the humanitarian horror of Darfur is indeed getting worse," says an appalled John Prendergast, Bill Clinton's former advisor on Africa.

Speaking at the end of November after his fourth visit to Darfur, Jan Egeland, the UN aid coordinator, said that from what he has seen, Darfur is teetering closer to the edge than ever before. "Sudan's government isn't disarming the Janjaweed as agreed in the peace accord; instead it is arming them to the teeth."

Minnawi himself , who is now a "special advisor" on Darfur to Sudan's president, Omar al-Bashir, freely admits that this is the case. "Everyone knows that the government is arming the Janjaweed again and is using them more than in the past. That has to stop."

Minnawi is under pressure. Since the day he signed the controversial peace accord with Khartoum, Minnawi has been considered a traitor by other rebels. International observers accuse his troops of acting as the paramilitary arm of the government army and of committing numerous war crimes since May.

In his recently published book "Krieg im Lande des Mahdi" (war in the land of the Mahdi), Spiegel correspondent Thilo Thielke concludes that the peace accord of Abuja has done nothing to reduce the conflict in Darfur. On the contrary, it has intensified it. The war between the rebels, the Sudanese army and its allies, the Janjaweed, has turned into a sort of fratricide between the divided rebel movements.

Armament in the west

What's more, since the conclusion of the peace agreement, both Sudan's government and the rebels hope that they can resolve the conflict that has been smouldering for almost four years now by military means. The National Redemption Front, which almost all opponents of the Abuja agreement have joined, has notched up several victories against Sudan's army since May.

In late November, the group even took control of an oil field in the province of Kurdufan, which does not even belong to Darfur. This is the first time that the rebels have taken their fight for more autonomy from Khartoum outside the region.

Al-Bashir's centralist government, which above all fears the birth of other autonomy movements in the country, reacted by reinforcing its troops, even managing to sell it to the UN as a "peace plan", and by arming the Janjaweed, which had complained earlier this year about a drop-off in support from Khartoum. In this way, al-Bashir is implementing a strategy he previously used in southern Sudan, namely to weaken the rebels by dividing them.

At the same time, his regime is keeping the UN on hold with a "one step forward; two steps back" tactic. He does so by rejecting at regular intervals the deployment of over 20,000 UN peacekeeping troops for Darfur, as approved by the Security Council in Resolution 1706.

After a crisis meeting on Darfur in mid-November, UN Secretary General Kofi Annan believed that al-Bashir was in principle in agreement with a peacekeeping force involving UN troops. Only a few days later, al-Bashir accused him of lying.

It is no coincidence that eastern Chad is now suffering from a similar fate to Darfur. The ethnic make-up of the two regions is the same; either you help each other or you hate each other.

There have always been isolated skirmishes between Arab nomadic pastoral tribes and black farmers, above all for precious land, on both sides of the border. Chad's president, Idriss Deby, himself of the Saghawa, has supported the Darfur rebels from the outset by providing them with arms and supply bases.

On the other side of the border, Khartoum has supported rebels in the United Front for Democratic Change, which sought to topple Deby. As a matter of fact, a Darfur expert in the International Crisis Group, knows that it was Darfur rebels from the Justice and Equality Movement that defeated Deby's opponents, who are supported by the Sudan, in front of the parliament in N'Djamena in April.

As is the case in Darfur, the reasons for the rebellion in Chad were homemade. Deby is an authoritarian ruler; according to Transparency International, Chad is the most corrupt country in the world; the income from oil in this, one of the poorest countries in the world, is channelled primarily into the purchase of arms. But it was the complex situation in Darfur that resulted in the current widespread fighting.

And then there are the refugees¾more than 220,000 Darfuris and 100,000 displaced Chadians are in camps in the Chadian border region. Because long stretches of the border are unmarked and not patrolled, the Janjaweed are perpetrating attacks both here and in Darfur.

In Chad, Arabs are now becoming the victims of ethnically motivated murders. Human rights activists have monitored attacks by African militia, which, like the Janjaweed, are attacking Arab settlements in Darfur. "The rebels came one afternoon and shot rifles at us without warning, screaming ‘death to the Arabs'," reports a 46-year-old shepherd of the Salamat.

"One of them said: ‘We'll take the pretty ones with us and shoot the ugly ones straight away'." Peter Takirambudde of "Human Rights Watch" holds Darfur rebels responsible for encouraging refugees in particular to perpetrate ethnically motivated attacks. "These conflicts are not restricted to small areas, there are clear connections to the crises in Chad and Darfur."

Make-or-Break Time for Darfur
International Efforts Need Support from Khartoum and Warring Factions
Top officials from the UN, the EU, the US and the African Union have met in Brussels to address the worsening security situation in Darfur. International donors and stakeholders agreed to renew commitments to the peace process. Nina-Maria Potts reports

Darfur Peace Accord
Say What You Like on Paper
After almost two years, talks moderated by the African Union on the future of Darfur have finally produced results. Yet many doubt that the government in Khartoum and the rebels are truly serious about making peace. Marc Engelhardt reports

END_OF_DOCUMENT_TOKEN_TO_BE_REPLACED
Social media
and networks
Subscribe to our
newsletter