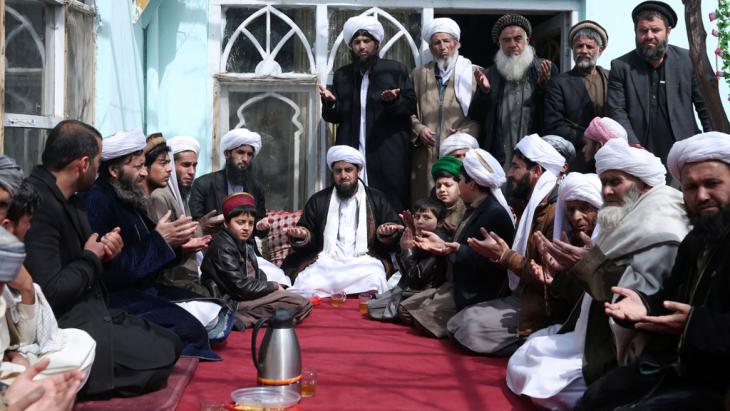 Sufis in Afghanistan
The forgotten mystics of the Hindu Kush

Sufism has shaped Afghan society and politics for much of the country's history. Today, very few are aware of this legacy. Might the Sufis now provide an important contribution to the stability of the country? By Marian Brehmer

For many, the thought of Afghanistan evokes associations with implacable fundamentalism and hopelessly backward and belligerent tribal cultures. Very few people would associate this country in the Hindu Kush with Sufism, the mystical dimension of Islam that has long played a significant role in the countries of central and southern Asia. Even fewer observers today would regard Afghanistan as the cradle of a moderate and sensitive Islamic culture that has made significant contributions to poetry and music.

Nonetheless, Afghanistan is inseparably linked to the history of Sufism. The country is the birthplace of great Islamic mystics such as the Persian poets Khwaja Abdullah Ansari, Hakim Sana'i, Jalaluddin Rumi and Abdulrahman Jami. The city of Herat, which became famous as a centre of Sufi poetry, still bears the epithet "Land of the Holy."

Why is nothing written about the Sufis?

One might ask why the public discussion on Islam and Afghanistan hardly, if ever, mentions the topic of Sufism, especially as the majority of Muslims in southern Asia are linked in one way or another to a Sufi order. Is it due, perhaps, to the fact that outsiders generally perceive Sufism, and for that matter all mystical traditions, as unworldly and anachronistic? 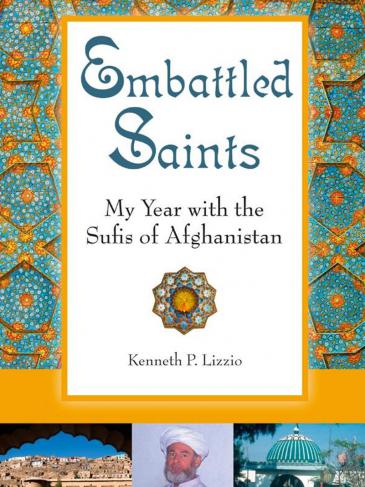 The book "Embattled Saints" sheds light on the long spiritual tradition of Afghanistan. In it, the American anthropologist and Sufi-specialist Kenneth Lizzio provides an account of his research into an Afghan Sufi order in the 1990s, anchoring his narrative in the history of Sufism and Afghanistan

In the autumn of 2014, the year when international troops withdrew from the Hindu Kush, a book entitled "Embattled Saints" was published, shedding light on Afghanistan's long spiritual tradition. The author, Kenneth Lizzio, an American anthropologist and expert on Sufism, offers an account of his research into an Afghan Sufi order during the 1990s. He anchors his narrative in the history of Afghanistan and Sufism.

In 1990, Lizzio was sent to Afghanistan by the American government as part of a project to quell the production of opium. Disillusioned with American academia, which ignored Sufism or, at most, only regarded it in connection with political or economic factors, Lizzio began his search for living Sufi communities in the country.

He found what he was looking for in the tribal areas on the Afghan-Pakistani border. There, he discovered a Sufi order that had existed for centuries. Its master, Pir Saif ur-Rahman, was a Shaykh of the Naqshbandi tradition, which emerged in 14th century Afghanistan. Lizzio encountered warm-hearted and educated people in the order, which, despite threats from fundamentalists, has managed to maintain its traditions. His book is a unique report on his year living together with Afghan Sufis.

Spread of Islam through Sufism

The spread of Islam in southern Asia can, for the most part, be attributed to Sufism. For a long time, Sufism very much characterized Islam as practiced in Afghanistan. The development of fundamentalism, by contrast, is a relatively modern phenomenon, which can be traced back to the war against the Soviets in the 1980s.

Sufism is tightly bound to the history of Afghanistan in many respects. While its formative years were marked by the ascetic lifestyle of the Sufis, its adherents soon assumed important positions in both the spiritual and worldly spheres of life in Afghanistan. In particular, Sufis from the Naqshbandi order became the advisors of kings and princes and oversaw the religious and spiritual education of hundreds of thousands of Muslims.

Afghan kings were traditionally crowned in the presence of a great Sufi master. The Sufis, however, were also involved in revolts against political rulers. In 1919, as King Amanullah rose to power under colonialism, the Sufis felt their position in society under threat. Amanullah decreed that Afghanistan undergo a radical programme of modernization, which would diminish the influence of religion and tribal law. In a rare act of consensus, orthodox Muslims and Sufis united against his plans. Following the overthrow of Amanullah, it would be decades before any ruler again attempted to displace the role of Sufism and tribalism in Afghan society. 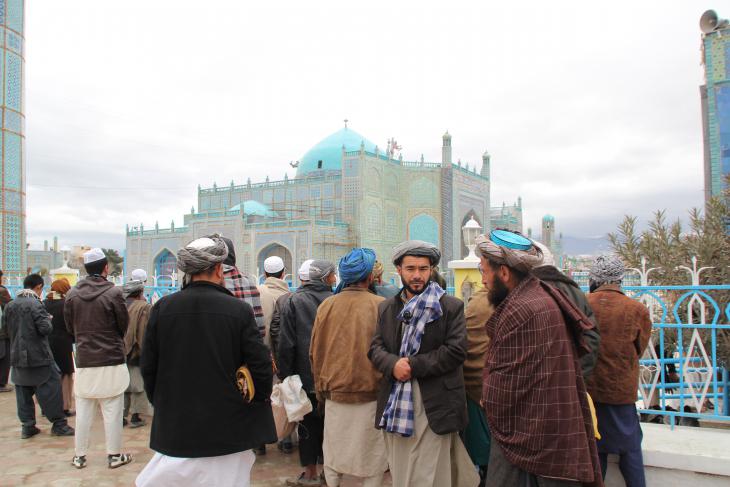 In contrast to other Islamic nations, Sufism in Afghanistan is not an elite phenomenon, but instead permeates all social strata. The majority of the population, even if they do not formally belong to an order, view Islam through the glasses of Sufism

During the 10-year war against the Soviets, two Sufi masters, Ahmad Gailani and Sibghatullah Mojaddidi, the spiritual leader of the Naqshbandi, were among the most important leaders of the mujahideen fighters. In 1992, after the mujahideen seized control of Kabul, Mojaddidi was named interim president of Afghanistan.

Although, since the mid-1990s, some Sufis have joined forces with the Taliban, most of the mystics were frequently suppressed under Taliban rule. In particular the Chishtiyya order, known for its love of music, was rigorously persecuted by the Taliban. The role of the Sufis as actors in the history of their country suffered a decline.

Even so, the Sufis continue to play a central role in the religious life of Afghanistan. In contrast to other Islamic countries, Sufism in Afghanistan is not an elite phenomenon, but instead permeates all social strata. The majority of the population, even if they do not formally belong to an order, view Islam through the glasses of Sufism.

This assessment, combined with knowledge of the historical strength of Sufism in Afghan politics, led the Afghan historian Helena Malikyar to recommend in a commentary for "Al Jazeera" that the Sufis be granted a greater role as peace brokers in the country.

Malikyar has criticized the international community for not recognizing the potential of the Sufis. With their focused advocacy of a mystical Islam, she sees an effective approach to fighting extremism. This would also save the West a great deal of effort. And, more importantly, it could lead war-torn Afghanistan back towards its rich cultural roots.

Home
Print
Newsletter
More on this topic
Naqshbandi Sufis in North America: Going Back to Divine PresenceSufism: A Soft Form of Islam?Sufis in Germany: In Step with Everyday LifeAnsar Dine's religious leader Chérif Ousmane Haidara: ''This is not Sharia, but banditry''
Related Topics
Afghan literature, Mysticism | Sufism, Taliban
All Topics

Very different Western reactions to the suffering in Ukraine and the Arab world show that there is a profound rift among cultures. Essay by Michael Young END_OF_DOCUMENT_TOKEN_TO_BE_REPLACED

The documentary "Nadia" tells the incredible story of Nadia Nadim, who was forced to flee from the Taliban as a child and became a football star. By Annabelle Steffes-Halmer END_OF_DOCUMENT_TOKEN_TO_BE_REPLACED

Three award-winning female directors appeal to the international film industry to save Afghan cinema. Supporting women filmmakers is more important than ever. By Christine Lehnen END_OF_DOCUMENT_TOKEN_TO_BE_REPLACED

Russia's ranking on the World Press Freedom Index has fallen again over the Kremlin's wartime censorship of the Ukraine conflict. From Myanmar to Mexico, journalists continue to ... END_OF_DOCUMENT_TOKEN_TO_BE_REPLACED

Ideally, those Europeans currently welcoming Ukrainian refugees would show the same sympathy to Syrians, Afghans and others fleeing war beyond the continent. But, argues Ian ... END_OF_DOCUMENT_TOKEN_TO_BE_REPLACED

Comments for this article: The forgotten mystics of the Hindu Kush

Perhaps the general population hardly ever comes across the word Sufi, has strange ideas about them, or has forgotten them, but the writer and thinker Idries Shah, just for example, wrote around two dozen books about the Sufis, and about the Naqshbandi in places like his Afghan homeland.

In this era of extremism in the east and consumerism and "me, me, me" generation in the west, the Sufi message has scarcely been more relevant.

The matter of the fact is that no players of Peace has explored the strong Sufi bondage of the region. The famous Chishti Order of Sub-Continent started from a village near Herat called Chisht. The Famous saint Hazrat Khwaja Moin Uddin Chishti ( Ajmer Sharif, India) and famous Saint Hazrat Baba Farid Uddin Ganj Shakar ( Pakpattan Sharif, Pakistan) ......this strong religious and spiritual connection might have played an important role in bringing peace in the region...but no one explored.

END_OF_DOCUMENT_TOKEN_TO_BE_REPLACED
Social media
and networks
Subscribe to our
newsletter