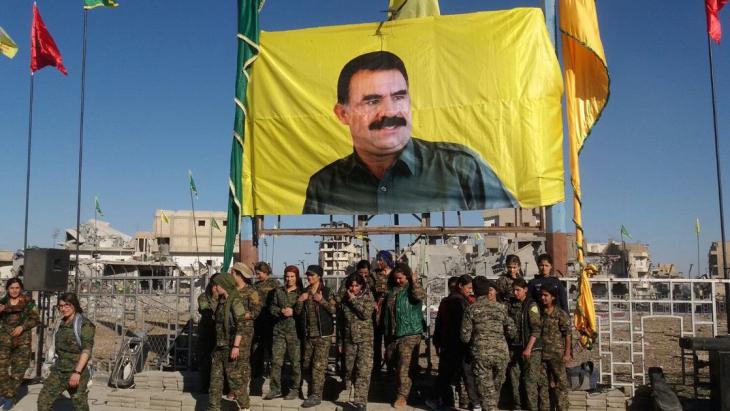 Syria and the war against IS
Strange bedfellows

Two groups from opposite ends of the political spectrum – U.S. Special Operations Command and the Syrian Democratic Forces (another name for Abdullah Ocalan′s PKK) – are making common cause in northern Syria. By Stefan Buchen and Karaman Yavuz

Chatting isn't really part of his remit. But on 21 July, the head of U.S. Special Operations Command clearly wanted to let it be known how he was pulling the strings.

General Raymond Thomas had taken up his place on the podium at a security conference held by the Aspen Institute in the U.S. state of Colorado. In a light and chatty tone, the conversation moved around the globe from one flashpoint to the next. After half an hour it arrived in Syria, or to be more precise the north of the middle eastern nation, scene of a war that has been going on for six years.

Here too, the much-decorated General has "special troops" under his command. It's no secret that they are there to fight IS. It's also a known fact that U.S. armed forces on the ground are also arranging support for a "Kurdish-Arab militia" known as the "Syrian Democratic Forces", formed as recently as 2015. Thus far, the U.S. military had made no public comment on just exactly who the members of this mysterious militia are. Even for dyed-in-the-wool Syria experts, up to this point the "SDF" had remained a mystery.

But in Colorado, to everyone's surprise General Thomas laid the cards on the table. Back in 2015, he reported, he met Kurdish political functionaries and PKK militia chiefs. "You need to change your brand," he told them. The General explained that the old name hadn't been communicable. If they were going to place too great an emphasis on the links to their past, to the PKK, then that was going to create problems, Thomas explained to the audience. 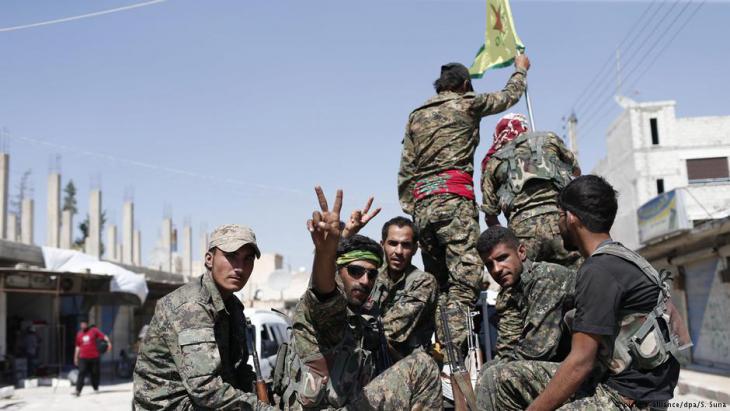 Political opposites attract: the Americans conduct bombing raids over Syria from the air, the PKK fighters, known officially in northern Syria as the People′s Protection Units (YPG), carry out the dirty work on the ground, supported by their own "special forces". The PKK is officially regarded as a terrorist organisation by Turkey, the USA and Europe

The Turkish-based PKK is categorised by many countries, including Germany, as a "terrorist organisation". The Kurdish militia chiefs obviously understood the concerns of the American army commander. "With about a day′s notice, they declared that they were the "Syrian Democratic Forces"," said General Thomas, before making one further point: "I thought it was a stroke of brilliance to put 'democracy' in there somewhere," he said, to spirited laughter from the Colorado audience.


The absurd perplexity of the Syrian war

So the U.S. general revealed that "SDF" is in truth a code name for the fighters of the Kurdistan Workers' Party or PKK. Not exactly the most obvious alliance, bringing as it does the imperialist and capitalist global power that is the U.S., together with a left wing cadre organisation that adheres to Marxist ideas and that advocates a socialist co-operative economy. Moreover, the PKK is regarded as a subversive terrorist organisation by Turkey, a member of NATO and therefore a formal ally of the United States.

It is therefore not an exaggeration to say that in northern Syria, two opposite political poles have sealed an alliance. It could be viewed as an indicator of the absurd perplexity of the Syrian war.

As Syrian camps housing families of Islamic State fighters get more dangerous, there are calls to bring children out, even if the mothers don't want to go. The idea of separating ... END_OF_DOCUMENT_TOKEN_TO_BE_REPLACED

The Kurds are under attack from two sides: from Turkey, and from Iran. The situation in their territories in northern Iraq is becoming increasingly desperate. Birgit Svensson ... END_OF_DOCUMENT_TOKEN_TO_BE_REPLACED

Hundreds of porters, locally known as ‘kolbars’, cross the mountainous border between Iran and Iraqi Kurdistan all year round. With Iran’s economic crisis deepening, ever more ... END_OF_DOCUMENT_TOKEN_TO_BE_REPLACED

The Syrian conflict remains insoluble for the time being. Yet Europe could start managing it better. By reorganising humanitarian aid supplies, becoming more involved in the ... END_OF_DOCUMENT_TOKEN_TO_BE_REPLACED

Bachtyar Ali sends the hero of his latest novel – "Mein Onkel den der Wind mitnahm" – literally flying. Jamshid is so thin after his years as a political prisoner that a gust of ... END_OF_DOCUMENT_TOKEN_TO_BE_REPLACED

In this essay, renowned Lebanese journalist and writer Hazem Saghieh asks whether the Arab Levant, which stretches from Iraq in the east to Egypt in the west, will remain an ... END_OF_DOCUMENT_TOKEN_TO_BE_REPLACED

Comments for this article: Strange bedfellows

"SDF" is in truth a code name for the fighters of the Kurdistan Workers' Party or PKK" - is nonsense. SDF is a Syrian umbrella organisation of many militias. PKK is a political party in Turkey. However, both advocate for Democratic Confederalism. Also, PKK is not a "terrorist organisation". The terrorist is the Turkish AKP/

END_OF_DOCUMENT_TOKEN_TO_BE_REPLACED
Social media
and networks
Subscribe to our
newsletter