Syria torture verdict due this week as many still seek relatives 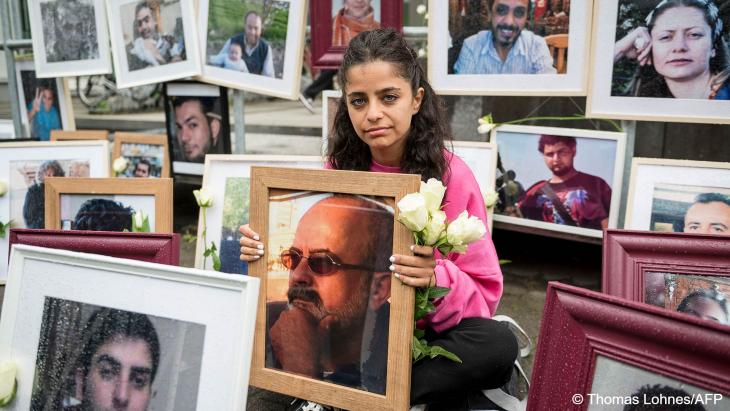 In a cafe in central Berlin, Wafa Mustafa has spread a cluster of photos across a table. The 31-year-old Syrian points to her father, an opponent of the Assad regime who has been missing since he was arrested in 2013.

As a German court prepares to issue the verdict on Thursday in the first trial worldwide over state-sponsored torture in Syria, Mustafa is one of many Syrians still looking for relatives missing since a brutal government crackdown on dissent began in 2011.

The trial of Anwar Raslan, a former colonel in Bashar al-Assad's regime, is an important "first step", Mustafa tells journalists. "But the most important part is that we don't look at detention in Syria as something from the past.

"We need to save those who can still be saved," she says, her green eyes filling with tears as she recalls lives shattered and dignity destroyed in Syria's devastating conflict.

Tens of thousands of Syrians have been starved or tortured to death inside the Assad regime's detention centres, as documented by "Caesar", a defector who had worked as a photographer for the Syrian military police.

"No one can imagine"

"The amount of horror and the brutality we have seen and we are still seeing is something no one can imagine," says Mustafa, who was invited last year to testify at the UN.

Mustafa arrived in 2016 in Germany, where she, like hundreds of thousands of other Syrians, has sought asylum.

The large population of Syrians who have sought a new home in Europe's biggest economy meant that victims of Assad's regime would sometimes run into their erstwhile torturers.

Tip-offs from victims have led to several investigations in Germany, with prosecutors wielding the principle of universal jurisdiction launching cases against several Syrians over their ties to Assad's regime.

Raslan, an alleged former colonel in Syrian state security, stands accused of carrying out crimes against humanity while in charge of the Al-Khatib detention centre in Damascus.

He is charged with overseeing the murder of 58 people and the torture of 4,000 others at the prison between 29 April 2011 and 7 September 2012. If convicted, he faces life in jail.

A week after Raslan's verdict, a Syrian doctor accused of crimes against humanity in Homs in 2012 will go on trial in Frankfurt.

At the beginning of the Raslan trial, Mustafa organised a campaign to place around 100 photos of missing Syrians outside the entrance to the courtroom.

The photos provided by families exiled in Europe and still looking for their lost relatives were hung on railings and placed on the pavement outside the court.

The fact that "we all think that even showing pictures of our loved ones in front of a court house in Germany is huge" shows "how desperate and how sad we are", she says.

Some 100,000 people have disappeared since Syria's war began with a civil uprising in 2011 – at the hands of the regime as well as militant Islamist groups, according to aid organisations.

Mustafa has not seen or heard from her father since armed men stormed a family apartment in Damascus in 2013 and took him away. He was an opponent of the regime and had taken part in rallies against Assad.

Mustafa, her mother and her two sisters quizzed everyone they knew, knocked on every door and even resorted to bribery. All to no avail.

"This is one of the most difficult aspects of losing a loved one to detention," she says. "They will take your money, your power, your energy, your beliefs."

She has even tried writing to Raslan through his lawyer. Could Raslan, who is said to have been in charge of one of Assad's detention centres, know something about her father?

He replied that he had no information. So Mustafa told his lawyer: "I want you to tell him that no one ever stops looking for their missing relatives. This is part of our suffering."

It has been "a huge challenge" for Mustafa to watch Raslan facing trial, surrounded by lawyers and interpreters, when so many other Syrians are still languishing in jail with no hope of a fair trial.

But she does not want revenge. "Justice for Syria is not revenge. This is what we fought for 10 years ago: freedom, justice and a state of law."

Mustafa regularly posts the number of days that have passed since her father went missing on social media. It has reached more than 3,100.

An inner drive compels her to carry on. "My memory of my dad, of Syria is my main weapon."    (AFP)

More on this topic
Assad's crimes against his own people: Syrian ex-secret police stand trial in GermanyInterview with the journalist and author Garance le Caisne: Caesar and the butcher of DamascusThe decades-long rule of Syria's al-Assad dynasty: Psychogram of a Syrian dictator
Home
Print
Newsletter
MoreAll Topics

END_OF_DOCUMENT_TOKEN_TO_BE_REPLACED
Social media
and networks
Subscribe to our
newsletter