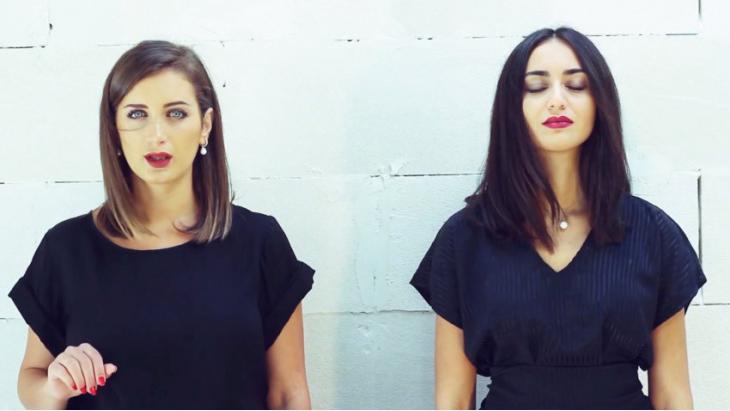 Syrian sisters Faia and Rihan Younan, residents of Sweden since 2003, have triggered a global hype with their peace song "To Our Countries". While western media reaction to the video has been for the most part enthusiastic, the response in the Arab world has been one of scorn. By Martina Sabra

Contemporary Arab singers or artists rarely receive any notice in the West. So when influential European media such as Spiegel Online or the BBC report in detail on a single YouTube video by two largely unknown Syrian-Swedish artists, there must be a good reason.

Is it the current situation in the world, the terrible images coming out of the Ukraine and the Middle East that make people around the globe cling with increasing desperation to any sign of hope for future peace? Or is it the two sisters' stunning blue eyes, crystal clear and deep as the proverbial mountain lake? Or perhaps the fact that Arab women perform here with bracing self-confidence and WITHOUT HEADSCARVES, something that people in the West are apparently still unable to imagine? Or the carefully staged aesthetic minimalism of the video? A simple whitewashed brick wall, two stylishly presented young women with carefully draped long hair wafted by a slight gust of wind as they gaze rigidly straight ahead – as well as a look usually associated with perfume commercials intended to connote individuality and modernity?

The motives for the West's adulation are surely diverse, but they all have one thing in common: most reporters have apparently been so blinded by the two women's appearance that they neglected to read the text scrolling by in the video. There can be no other explanation, because otherwise they would have realised that this YouTube video contains absolutely nothing that justifies any sort of public acclaim.

Faia Younan, who was mostly an unknown outside of Sweden until a few weeks ago and whose fan base, at least on Facebook, seems to be quite modest, interprets hits by the Lebanese superstar Fairuz. She is certainly welcome to do so, but many of her peers do it daily much better without reaping laurels in the western media.

In the breaks between verses, Faia's sister Rihan Younan declaims self-written texts on the subject of war in the Middle East. Unlike what has been touted in the Western media, these verses are not about the waning beauty of the Levant but instead rather pedantically lament the alleged causes of the conflicts in Syria, Iraq, Lebanon and Palestine. The solemnity of her recitation, fluctuating between accusatory and encouraging tones, is probably meant to suggest deep artistic meaning and poetic ambivalence. Follow the text closely however, and this presentation style nonetheless fails to obscure the hollowness of the phrases.

We are surprised to learn that an "illogical war" has been raging for three years in Syria. Aha. Is there such a thing as a "logical" war? At this point, we can still hope that the author Rihan Younan will leave it at that. But it only gets worse: "A war that sneaked through the door stealthily without knocking," she continues. Of course, the listeners think, shaking their heads: a war that just sneaks in, that's despicable. If the war had only knocked first, we would have invited it in for an Arabian mokka!

We sense that things will go on in this vein, and we are not disappointed: "A war that never knew its beginning, a war dreaming of its end." Right! A war without a beginning and without initiators! Why would we ever think that someone might be responsible for this war? Possibly the Assad regime, which has for the last nearly four years been brutally putting down what began as a peaceful revolution, stubbornly insisting that all opposition members are terrorists?

After the Syrian chapter, the – vocally by no means untalented – speaker Rihan Younan critiques in the same disingenuous way the conflicts in Iraq, Lebanon and Palestine. The others are always the ones to blame: the 20th-century colonial powers, England, France and the USA. As we might expect, Palestine is summoned here as the original conflict: "Palestine, the compass directing all causes. The biggest and oldest of them all (ar. qadaia)."

But then, all of a sudden, there are glimmers of hope on the horizon: the renewed Arab nation, within newly drawn boundaries, with fresh hope. Where exactly this renewal is supposed to come from remains unsaid. But we can imagine it, because Rihan Younan's implicit analysis and her convoluted choice of words are distressingly similar to the rhetoric with which the still-ruling Syrian President Bashar al-Assad occasionally mortifies the Arabophone public.

In the Arab world the two sisters' message of peace was in part greeted with gratitude. But most western media have failed to mention that there has also been some harsh and arguably justified criticism. "Naive and featherbrained" was the judgement of the popular Lebanese TV satirist Nadim Koteich in a long and detailed critique. Koteich works for the Hariri channel Future TV, though, and is therefore not entirely politically independent.

Still, ordinary people on the street also dismiss the video. "Not exactly up to the mark artistically, and nothing new either," a Syrian refugee now living in Berlin told Qantara.de. "The musical arrangement is nasty and the song seems artificial and dishonest."

That said, at least the hairstyles and makeup are well-done and very pretty to look at, he points out. "But that's it." A Syrian student living in exile in Cologne put it even more bluntly: "You can't sing about peace in Syria without naming those responsible for the tragedy. And the main culprit is the Assad regime."

Opposition activists link the supposed peace video with pro-Assad propaganda. "At first we had the impression that these women were really interested in peace," says a Syrian activist from the Istanbul-based exile theatre troupe Firqat Khutwa Al Fanniya. "But then we discovered that the two gave a long interview about their project on Syrian state-run television. For us, this means that they sympathise with the Assad regime, because Syrian television constantly runs propaganda for the regime and uses such shows to push its agenda."

The Firqat Khutwa Al Fanniya players shot a satirical counter-video, the latest version of which has been available on YouTube since 22 October 2014, where it has received well over 100,000 clicks. In the parody, two bearded male actors mimic the women down to the last detail, complete with long wigs and bright red lipstick and naively batting their eyes.

Even the wind-blown hair is the same. In an ultra-short two minutes, the men use punchy irony to express their understanding of the message in the Younan sisters' purported peace video: "Syria. Agents of foreign powers set out to burn and destroy our country," one declaims. "They pilllaaaaged," the other laments in a heart-rending tone. "The colonial powers supported them. They sowed fear in the hearts of the innocent. Our leader Doctor Bashar Hafez al-Assad promised them reforms and safe conduct... Yet they continued their terrorism and forced our dear President to do things of which he was innocent. Oh, you great leader of the fatherland! Doctor Bashar Hafez al-Assad is a good man, but his advisors are a... holes. Aaaaaaa….. hooooooles."

Despite of these allegations, there is as yet no evidence that the Younan sisters' video is in fact a propaganda coup by the Assad regime. The two sisters have said in several interviews that they do not wish to engage in a debate on the topic. But the fact is that the substantive message of the video perfectly matches the current propaganda discourse put forward by the Assad regime: The focus is solely on the atrocities perpetrated by ISIS and foreign countries, while not a word is said of the responsibility borne by the Assad regime itself.

And not only that: the production team for "To Our Countries", which besides the Younan sisters also included aspiring young media professionals from Lebanon, Iraq and Palestine, also have to ask themselves whether their underlying goal was not only the supposed message of peace but also self-marketing. That is not objectionable per se, but it should at least be mentioned.

The Kurds are under attack from two sides: from Turkey, and from Iran. The situation in their territories in northern Iraq is becoming increasingly desperate. Birgit Svensson ... END_OF_DOCUMENT_TOKEN_TO_BE_REPLACED

More than 300 children in rebel-held northwest Syria kicked off their own football World Cup on Saturday, with organisers hoping to shine a light on communities battered by 11 ... END_OF_DOCUMENT_TOKEN_TO_BE_REPLACED

Lamya Kaddor, MP for Germany’s Green Party, visited Qatar with a group of parliamentarians. In interview with Claudia Mende, she advocates a differentiated picture and urges that ... END_OF_DOCUMENT_TOKEN_TO_BE_REPLACED

Arabs in the German capital? For many, this means criminal clans. Yet the city is home to a vibrant intellectual scene. Exiles from Syria, Palestine and Egypt are gathering to ... END_OF_DOCUMENT_TOKEN_TO_BE_REPLACED

After a two-year hiatus, the Arab League re-convened at the beginning of November in Algiers against a backdrop of uncertainty and discord. By Pierre Boussel END_OF_DOCUMENT_TOKEN_TO_BE_REPLACED

In the run-up to the COP27 global climate summit, hosted by Egypt in November, it is worth noting that little rainfall, aggressive heatwaves and worsening drought make the Middle ... END_OF_DOCUMENT_TOKEN_TO_BE_REPLACED

“Or perhaps the fact that Arab women perform here with bracing self-confidence and WITHOUT HEADSCARVES, something that people in the West are apparently still unable to imagine?”

No doubt a small minority of Westerners erroneously believe that Arab women are all forced to wear some form of hijab. But I'd remind her that in many Arab societies, and some traditional Muslim societies outside the Middle East, NOT wearing a hijab -- including a burqa (Afghanistan) or a niqab (Saudi Arabia) or a hijab which covers the hair (Iran) -- is both a crime and a behavior which is considered socially unacceptable.

So I'd suggest the "shock" value of these uncovered Syrian women is much greater in Muslim circles than among the rest of the world. Surely she understand this?

This article is very poor in terms of both argument and proof.

So full of prejudice and frankly pathetic criticism. We, the people of the Arab and the Western world really need to understand each other better. This "journalist" spewing prejudice is not helping.

I hope we'll see more young Arabs, men and women, sharing their art and wishes of peace with us in the future. Thanks you.

And no, you don't support Assad just because you don't mention him in a song.

END_OF_DOCUMENT_TOKEN_TO_BE_REPLACED
Social media
and networks
Subscribe to our
newsletter