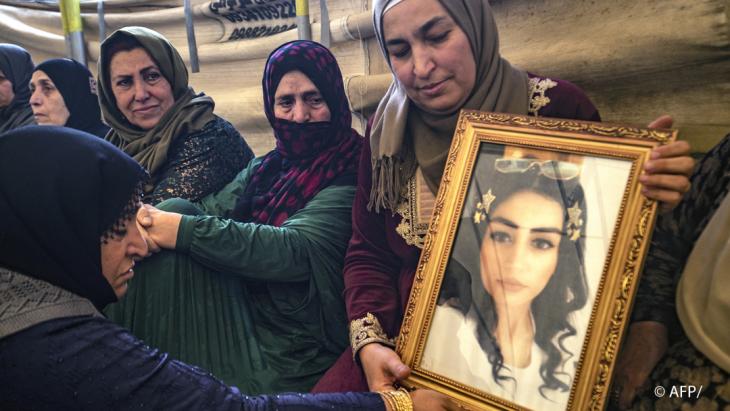 With tears pouring down her cheeks, Syrian mother Shawafa Khodr mourns her daughter, missing since the crowded migrant boat she boarded hoping to join her fiance in Germany sank in the Mediterranean. Khodr refuses to believe her daughter is dead, hoping against the mounting evidence that the young woman did not drown in the waters off Lebanon, but has somehow survived.

"I will wait for her every night and pray to God for her safety," 60-year-old Khodr said. "Maybe she is just lost on the beach somewhere."

The distraught mother even kicked her son out of the house, after he said that she should come to terms with the fact that her daughter may never return.

Khodr's daughter, Jenda Saeed, 27, and her friend Inas Abdel Salam, 23, were engaged to two brothers in Germany. Last month, the pair left their home in war-ravaged northeast Syria on the start of the long journey to join them.

They headed for neighbouring Lebanon, from where they set out on 23 April on a boat jam-packed with 84 passengers hoping for a better life in Europe. They never made it: the boat capsized when it was being chased by Lebanon's navy.

Of the 84 passengers, 45 were rescued but 39 are still missing, according to the United Nations. Saeed and her friend Salam are, along with six other Syrians, among those unaccounted for.

Khodr stares at a photograph of her daughter wearing a red and white sweatshirt, a braid cascading down her shoulders. "She carried my scarf in her bag, so that I can protect her," she said.

On the eve of her daughter's trip, Khodr held a party to celebrate her daughter's upcoming wedding. "I was happy then," she said, watching a video on her phone of Saaed dancing during the party. "But now not a day passes by without tears," she added, wiping her wet eyes.

But Khodr said she did not know Saeed planned to travel on the dangerous migrant boat route. "If I had known she would travel this way, I would have stopped her," she said. "Even for her weight in gold, I would not have gambled with her life."

But unlike Khodr, Hiam Saadoun, 42, mother of Inas Abdel Salam, said she has accepted her daughter has drowned. While her body was never retrieved, Saadoun held a funeral for her inside a tent in the northeast town of Qamishli.

Her only hope today is that rescuers eventually find the corpse.

"I wish I could have seen her in her wedding dress," the mother said, a picture of her daughter in her hand. "I used to imagine her at home, surrounded by children and family... but today I hope that her wedding will be in heaven."

Saadoun said her daughter had long wanted to flee Syria, where civil war since 2011 has killed nearly half a million people and forced half of the country's pre-war population from their homes.

"She was looking for a better life in Europe," she said. "She would sometimes tell me: 'I have a feeling that if I go, I will never come back.'"    (AFP)

END_OF_DOCUMENT_TOKEN_TO_BE_REPLACED
Social media
and networks
Subscribe to our
newsletter