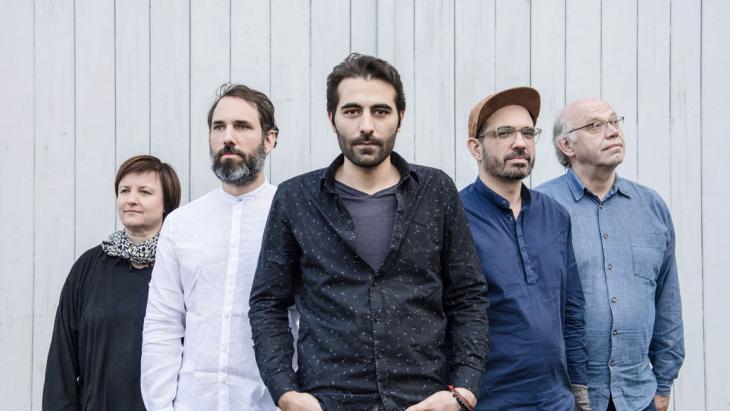 Based in Switzerland, Syrian musician Bahur Ghazi has created an exciting synthesis of traditional Arabic music and jazz improvisation. Together with his band, Palmyra, he tells of his longing for peace in his homeland. By Stefan Franzen

"Bidaya", the title of Bahur Ghaziʹs debut CD, is the Arabic word for start, launch, beginning. And in fact the oud player has made several new starts in his young life, both private and musical.

Meeting him for an interview, I am confronted with an alert, likeable young man bubbling with enthusiasm, who speaks about himself and his music in Swiss-accented German. "I come from Darʹa on the Jordanian border, a small town with 40,000 inhabitants. The area is mainly agricultural, there are a lot of vegetables and a little bit of music," Ghazi tells me with a laugh.

That "little bit" is a huge understatement: you can hear folk music on every street and every house has an oud, as he immediately adds. And so it was no surprise that he, the eldest son in a family of eleven siblings, developed a fascination with the lute and began to play.

When he was eleven years old, he heard an oud on the radio that captivated him with its crystal clear tones. It was the instrument of famous Iraqi musician Naseer Shamma. "What kind of strings does he have? What key is he playing in? I wondered about this and went looking for CDs and cassettes by Shamma. I discovered that theyʹd been advancing the instrumentʹs technical possibilities in Iraq since the 1920s and had developed different sizes. I wanted to learn to play like that! I tried to somehow master Shammaʹs pieces on my own oud."

Finally, Bahur Ghazi met his role model in person at a concert in Damascus. After playing for him, the maestro was so impressed that he arranged a scholarship for Ghazi in Cairo, where he himself taught. Ghazi had previously tried to get a place at the conservatory in Damascus. "But when they heard I was from obscure Darʹa, they just said: ʹGo home and plant tomatoes.ʹ"

While at university in the Egyptian capital, Bahur Ghazi found himself caught up in the optimistic spirit of the Arab Spring; he lived just a few blocks from Tahrir Square. "A little while after that, the revolution started at home as well," he recalls. "We didnʹt want to keep living in a Syria where we were afraid of our own authorities."

Cairo was also a point of musical departure for Ghazi: soon he was teaching at the academy of music himself. He broke free of traditional time signatures, developed crooked rhythms, new melodies. His baffled colleagues were convinced his music was "wrong".

In Switzerland, he finally found a country where he could live without fear and make music. But not before spending four years in limbo, waiting in the Cazis/Graubunden asylum centre for a decision on his future. When it became clear that he could stay, he began looking for new ways to express himself: "It was difficult to begin with. I was playing things I didnʹt know, that didnʹt make any sense to me. But I always firmly believed that, if you want to integrate, music is the universal language. I told myself Iʹm going to carry on until I can hear the beauty."

He found his first musical home with a band called Walliser Seema, playing chansons, rock, reggae and folk and finding a role for himself and his oud in a music that was still foreign to him.

Ultimately he happened across the jazz bassist Luca Sisera, who was looking for a lutenist to take part in a project. He became like a brother to Ghazi, familiarising him with the music and language of Switzerland. They decide to work together long-term, with Lucaʹs brother Darius on drums, Christoph Baumann on piano and the leading Swiss accordionist Patricia Draeger.

Bahur Ghazi called the new band Palmyra, after the ancient oasis city in Syria. "Iʹve always wanted to visit Palmyra, but Iʹve never been," Ghazi says with regret. "But the whole history of this superior civilisation, this hub where the cultures of everywhere from Greece to Persia, India to Morocco, came together, has made a big impression on me. I feel Palmyra deep in my heart, the sun going down behind the temples, the taste of the air, the desert."

Like the title track of the CD, "Bidaya", which for him was the start of his new musical adventure, the composition "Palmyra" is also written in an uneven, "not normal" metre. "Because what happened there isnʹt normal, either," says Ghazi. "It was very sad hearing about the destruction IS caused there. As a musician, I had to respond to it with something beautiful. I had to do something to counter the war, the hatred and the violence."

The jazzy improvisations of his recordings move from lyrical, mysterious moments, to boisterous, almost rock-like outbursts; a quartertone trumpet drops in; suddenly there is a salsa rhythm in the air as well.

The piece dedicated to the Qasioun, the mountain near Damascus, is a stripped-down, melancholy and virtuosic oud song. And the epic "Salvation Voyage" unites orient and occident in a truly organic way, with a singing bass and a Balkan-like wistfulness in the accordion line.

And then there is the piece is called "Phoenix Resumption": "I believe Palmyra will rise again from its ashes," says Ghazi. And his country, too, he hopes, will also emulate the phoenix one day. He longs to be able to visit Syria and his family again. "But the politicians and authorities arenʹt doing anything. Normal people have to take care of things and musicians need to show this hope in their work," he believes.

Welcome to the world of Al Qasar, where Arabic music collides head-on with punk and psychedelic to create something powerful and beautiful. "Who Are We" is a raucous, subversive ... END_OF_DOCUMENT_TOKEN_TO_BE_REPLACED

Egyptian authorities have Mada Masr in their sights once again after critical reporting. But the editor of the country's last independent news source is adamant they will continue ... END_OF_DOCUMENT_TOKEN_TO_BE_REPLACED

Like Christianity, Europe's history is one of migration. Both have strong roots in the Orient and in cultures thousands of years old. Cultural historian Bernhard Braun invites us ... END_OF_DOCUMENT_TOKEN_TO_BE_REPLACED

When she ascended the throne, millions of Muslims still lived under British rule. Later, Elizabeth II appealed for tolerance in a multi-religious society. She was the first ... END_OF_DOCUMENT_TOKEN_TO_BE_REPLACED

END_OF_DOCUMENT_TOKEN_TO_BE_REPLACED
Social media
and networks
Subscribe to our
newsletter