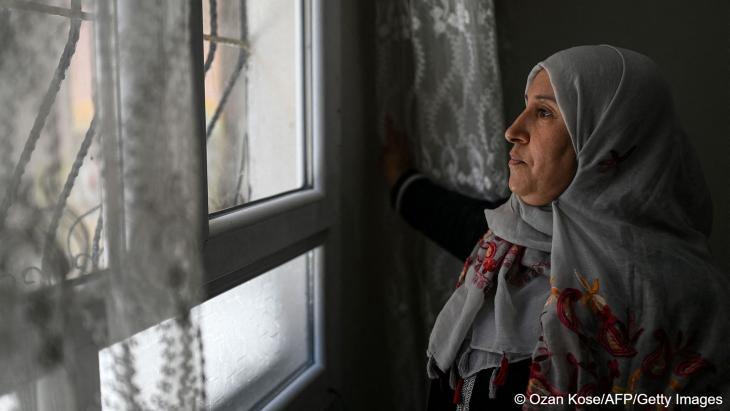 Samira hears the same message from Turkish politicians on the television day and night: Syrian refugees like her must return home. But her home near Damascus is still not safe, she says. The 44-year-old from Ghouta is one of the hundreds of thousands of refugees in Turkey's Sanliurfa province, which shares a long border with Syria.

Civil war in Samira's homeland is estimated to have killed nearly half a million people and displaced millions since it began with a brutal crackdown of anti-government protests in 2011.

Turkey has fervently opposed Syrian President Bashar al-Assad, backing rebels calling for his removal and opening its doors to refugees. But a new wave of economic turbulence, which has seen inflation spike and the value of the lira drop, has put Turkey's 3.7 million Syrian population under enormous strain.

Samira said she has never felt so much pressure since she fled to Turkey in 2019.

"I don't think about going back, they destroyed our house. The situation is bad over there," she told AFP from her modest ground floor flat in the city of Sanliurfa, which is home to around half a million Syrian refugees – a quarter of the province's population.

Refugees fear they will be used as a scapegoat for Turkey's problems in the 2023 electoral campaign, as President Recep Tayyip Erdogan faces rising public anger over their presence.

The main opposition, the Republican People's Party (CHP), has promised to send them back to Syria, while the leader of the far-right Victory Party has admitted funding a viral social media video aimed at scaring Turks about a "silent invasion" of migrants.

Earlier this month, Erdogan said Ankara was aiming to encourage a million Syrian refugees to return to "safe zones" on the Turkey-Syria border by building them housing and local infrastructure.

"'Send Syrians back, send Syrians back!' This is what we hear on television from morning to evening," said Samira, sitting on a cushion on the floor and unwilling to give her full name. "Why don't they like us? We try to build a life here, we try to stand on our own feet. Politicians use us as an election campaign material."

Despite pressure from opposition parties, Erdogan has pledged that Turkey will not force Syrian refugees back and "will not throw them into the lap of murderers". But his assurances are not allaying their fears.

A few metres from Samira's house, 43-year-old Umm Mohamed, who runs a grocery store selling Syrian bread, fava and olives, cannot understand the turn of the tide in society. "We are very scared", she said, standing behind the counter, her eyes looking timid beneath a black veil. "We feel the pressure. As a foreigner, we have to be polite all the time."

Syria not an option

Mohamed's husband defected from Assad's army. "We can't go back," she said. "They would kill us."

Fatima Ibrahim, in her early 30s, married a Syrian refugee after fleeing to Turkey nine years ago. The economic fallout is hitting them just as hard as the Turks, she said. Her husband lost his job as a blacksmith during the COVID-19 pandemic. Two weeks ago he found a job as a farmer in central Konya province – 700 kilometres from Sanliurfa.

"Employers pay us less, so locals are annoyed, blaming us for accepting a wage less than theirs," she said, sitting next to her three young sons. "Sometimes we hear from the locals that we should go back, that we have caused them to lose their jobs."

"Some people tell us, 'Syria is better now, why don't you go back? Everything gets so expensive because of you.' That makes me feel so bad." But returning to Syria is not a possibility for Ibrahim. "I will never go back. I will either stay here or flee to Europe. There's no third option," she said.

Ibrahim said she maintains a low profile in public to avoid trouble, keeping contact with locals to a minimum. "I don't visit my neighbours, and they don't visit my home. We don't mingle," she said.

Haifa, a 39-year-old English teacher from Aleppo, has fluent Turkish after nine years here, and avoids speaking Arabic in public so as not to attract attention. "I want to keep myself safe," she said, after she was exposed to verbal assaults on the street. "Political issues affect us more than the economy."

Haifa said: "Some people tell us 'go back to your country, you're having fun while our soldiers are dying there'."

"You think it is easy to leave everything behind you? Your memories, your house, everything. You cannot even visit your mother or father's grave."    (AFP)

END_OF_DOCUMENT_TOKEN_TO_BE_REPLACED
Social media
and networks
Subscribe to our
newsletter