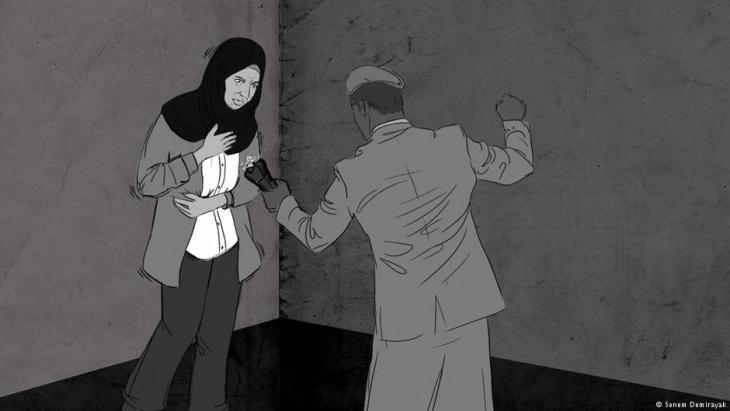 Thousands of Syrian women are believed to be incarcerated in the Assad regime's prisons. Little is known about their fate, but those who manage to escape tell tales of horror. Julia Hahn reports from Gaziantep

Muna Muhammad recalls every last detail. The stench in the cells, the pain, her torturers. "He pulled a black plastic bag over my head and then he hung me from the ceiling, head down," the 30-year-old says. The memory still haunts her. The guard said he was going to leave her hanging from the ceiling until all her "evil thoughts land in this bag," she remembers.

Muna was a music teacher before she was arrested in 2012 for participating in protests against President Bashar Assad in Deir al-Zour. She was released, then re-arrested and taken to the infamous Military Intelligence Branch 215 facility in Damascus – inmates call it "branch of hell" because torture is a daily occurrence.

One day, her torturer showed up with a stun gun. "He said, 'Muna, where is your heart?'" she recalls. "I pointed at my heart and that's where he zapped me."

Locked up in hell

For months, Muna was locked up in solitary confinement or packed together with other inmates. "One day they interrogated a 16-year-old," she says. "I heard her scream. It was so loud. I thought they must be killing her." Many women were sexually abused, Muna says, adding that she also faced the threat of rape if she didn't confess.

Hygiene conditions at the prison were a disaster, says Muna, explaining that the inmates were not always allowed access to toilets or showers. There were children, too. "I remember a woman and her daughter," Muna says. "Her cell was very small and dark. The girl cried all the time: she kept peering underneath the door, hoping for a bit of daylight."

Muna was eventually granted amnesty and released. In 2016, she managed to flee to Turkey, where she still lives today – in Gaziantep, a city that has become a haven for half a million Syrians. 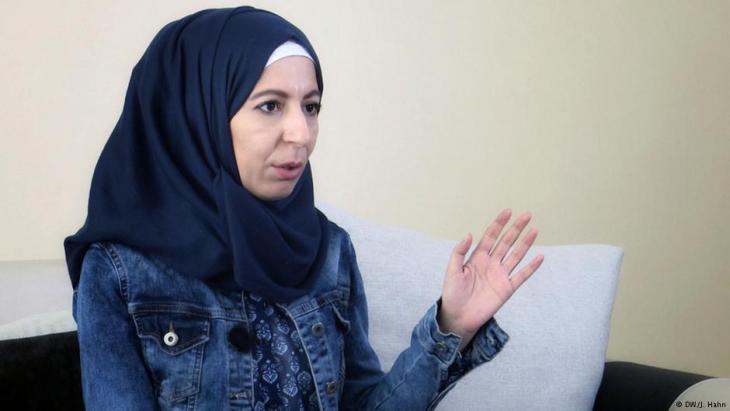 "One day he turned up and said: ʹI got a present – Iʹd like to show it to you.ʹ It was an electro shocker" – torture victim Muna Muhammad managed to flee to Turkey in 2016

No one knows exactly how many women are imprisoned in Syria. "More than 7,000," estimates Fadel Abdul Ghani, head of a non-governmental organisation that documents human rights violations in the Syrian war. Ghani's statistics on armed groups show that most of them also involve cases of violence against women – and the Syrian government heads that list. Women are deliberately targeted, he says, because they always played an important role in the opposition against Assad. The regime sees torture and sexual abuse of women as a war strategy, Ghani argues. "Break the women and you break the family – and with it opposition in society. That's the goal."

In 2017, Amnesty International reported that more than 17,000 people have died since 2011 as a result of torture, abuse and disastrous conditions in prisons run by the Syrian intelligence services and the Syrian government.

Up to 13,000 people were executed at the infamous Saydnaya Military Prison north of Damascus, according to the human rights organisation, which says the "systematic, widespread attack by the government on civilians" amounts to "crimes against humanity." The Syrian president rejected the report, which is based on statements made by former prisoners, as "fake news."

Muna wants the world to know what is going on in Syrian prisons. Humiliation was part of the torture, too, she says, recalling an incident where a guard asked a man about his profession. The man said he was a doctor and the guard ordered him to hop on one leg and say, "I am a rabbit." "At first the doctor spoke very quietly, so they beat him and then all of us heard him yell: 'I am a rabbit, I am a rabbit.'"

Muna has written down her story and she collects other victims' accounts, too. She has started a support group for Syrian women, the "cure project."

Muna's new life is in Turkey. But she hopes that one day, she can help bring her torturers in Syria to justice.

Any reconciliation between Turkey and Syria’s Assad regime would have disastrous consequences for many Syrians, explains Syria expert Kristin Helberg END_OF_DOCUMENT_TOKEN_TO_BE_REPLACED

There are signs of an imminent normalisation of relations between Turkey and Syria. This would allow Erdogan to score political points domestically before the upcoming elections ... END_OF_DOCUMENT_TOKEN_TO_BE_REPLACED

As Syrian camps housing families of Islamic State fighters get more dangerous, there are calls to bring children out, even if the mothers don't want to go. The idea of separating ... END_OF_DOCUMENT_TOKEN_TO_BE_REPLACED

Where are the measures to deal with the looming challenges facing the Arab world? In this commentary, Marwan Muasher warns that the region is in grave danger of falling behind ... END_OF_DOCUMENT_TOKEN_TO_BE_REPLACED

At the end of every year, the team at Qantara.de gives you a run-down of the ten most-read articles on the site over the past 12 months. Here is a quick overview of the stories ... END_OF_DOCUMENT_TOKEN_TO_BE_REPLACED

Social engagement is often motivated by religious factors. A new book explores the background to these community efforts and appraises how effective they are in helping to ... END_OF_DOCUMENT_TOKEN_TO_BE_REPLACED
Author:
Julia Hahn
Date:
Mail:
Send via mail

END_OF_DOCUMENT_TOKEN_TO_BE_REPLACED
Social media
and networks
Subscribe to our
newsletter