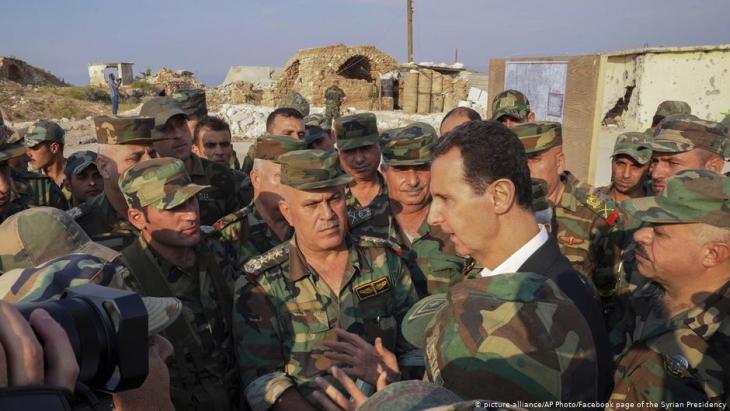 Finding a lasting political solution to the Syrian conflict is the challenge facing the constitutional committee that has been meeting in Geneva since the end of October, under UN mediation. But achieving this goal is an illusion, since the Syrian regime has for years shown no willingness to surrender any of its power. By Kristin Helberg

It's hard to keep track of what's going on in Syria these days. This is because all parties involved are acting extremely pragmatically at the moment to assert their own short-term interests, preferring to come to temporary agreements with their opponents rather than seeking long-term alliances.

This has resulted in NATO partner Turkey exercising control over the northern Syrian border together with NATO adversary Russia, while both are annoyed that American units have remained behind to guard the oil for the Kurds. The Kurdish People's Defence Units (YPG) have meanwhile withdrawn from the border, ceding the field to either the extremists in the Syrian National Army, who as Syrian mercenaries in the service of Ankara are expelling and massacring their own compatriots, or to the regime's own troops, who are advancing wherever they encounter little resistance.

Further west, the Russian military in Idlib province allowed U.S. combat helicopters to use the airspace in order to eliminate IS leader Abu Bakr al-Baghdadi. His presence near the Syrian-Turkish border evidently escaped the notice of the Turkish observer posts stationed there.

Turkey is regarded as the power protecting the last province held by opponents of Assad. It was originally supposed to keep radical insurgents in Idlib in check and thus avert a military offensive by the regime and Russia. But instead of protecting three million civilians from Russian air raids and the Syrian regime's advancing troops, President Erdogan chose instead to brainwash the Islamists he finances with anti-Kurdish sentiments, in order to then dispatch them to do battle with the YPG east of the Euphrates in the guise of the Syrian National Army.

So much for the dynamics of recent weeks, which have seen various government and non-government armed forces take up their positions: Turkish, Russian, American and Syrian soldiers, plus Kurdish fighters and Islamist militias.

Process of rapprochement rather than confrontation

Is a military escalation now looming in north-eastern Syria, while Europe half-heartedly discusses internationally controlled protection zones? No. As a matter of fact, what looks like confrontation is actually the beginning of a process of rapprochement. If Idlib can be recaptured by force and the north-east then put under the control of the regime again through unilateral agreements, the world – including Turkey and the USA – will have to come to terms with that fact that Assad has won. Then leaders like Erdogan and Assad, Putin and Trump can pat each other on the back and tweet about the "great deal" they have made. 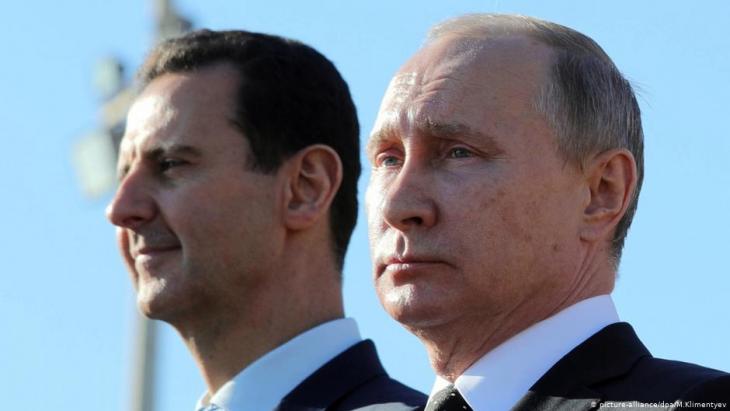 A strategic, yet burdensome partner: "even though the Syrian conflict has helped Putin to consolidate Moscow's role as a world power and to demonstrate diplomatic, political and military muscle, stabilising Syria in the long run is more than he can handle economically. He needs allies for this task – the Gulf States, China, but above all Europe and the USA," Helberg writes

Behind this all is a Russian strategy born of necessity. President Vladimir Putin has invested a great deal in keeping his protege Bashar al-Assad in power, but he cannot lastingly stabilise the regime in Damascus on his own. Reconstruction is too costly and the local warlords too powerful, while the regime-loyal businesspeople have exaggerated expectations of what is possible.

Clientelism and the war economy will continue to make everyday life in the regime-held areas difficult in the foreseeable future. Rather than building social housing for domestic displaced persons atop the ruins of destroyed city districts, luxury apartments are going up for an Assad-loyal elite. And at the checkpoints, Syrians without the necessary connections are at the mercy of the whims of the militiamen who happen to be on duty.

Although the plight of the people will be alleviated somewhat by humanitarian aid from the United Nations, financed predominantly by the West, dissatisfaction among the populace will only grow, especially with regard to housing. This resentment can only be kept under control as long as the fear of arrest is greater than the push for change. The omnipotence of the secret service is therefore Assad's prime instrument for wielding power.

Syria – a heavy burden for Russia

With this state of affairs, Syria is a heavy burden on Russia. For even though the Syrian conflict has helped Putin to consolidate Moscow's role as a world power and to demonstrate diplomatic, political and military muscle, stabilising Syria in the long run is more than he can handle economically. He needs allies for this task – the Gulf States, China, but above all Europe and the USA.

Putin is therefore deftly engineering Assad's international rehabilitation. Along with targeted propaganda ("the West has lost the military battle and now wants to destroy Syria economically through sanctions") and a PR campaign that embeds Western journalists in the country alongside members of the Russian and Syrian military, Moscow is offering every stakeholder just what they need.

Turkey, for example, wants to put an end to Kurdish autonomy. So Putin keeps reminding Ankara and Damascus that they have a common enemy, which they had already set out to fight together in 1998 with the Adana Declaration. At that time, the Syrian regime recognised the PKK as a terrorist organisation, after its founder, Abdullah Ocalan, had been hiding in Syria for 18 years. From Ankara's point of view, this commitment to combatting terrorism also applies to the Kurdish Democratic Union Party (PYD), which it regards as the Syrian branch of the PKK and therefore as a terrorist organisation of equal standing.

The Turkish foreign minister has already announced that a return of Turkish-controlled territories to the regime in Damascus is conceivable if the latter pledges to take effective action against all forms of terrorism. So if Assad were to end the autonomy project of the PYD and integrate the YPG into his state troops, Erdogan would be willing to cooperate. This would be a dramatic turning point in a conflict in which Turkey was once the main supporter of the political opposition and the lifeline for the armed uprising against Assad for more than seven years.

In this case, however, Turkey would have to give up its plans of sending back refugees, because most of the Syrians living in Turkey fled the regime and cannot return to Assad's territory for fear of persecution, arrest and forced recruitment. At worst, however, there is still the threat of further deportations of Syrians like those that have already taken place according to research by Amnesty International. Turkey would then no longer be a safe haven for Syrians and the EU-Turkey agreement   would be rendered invalid.

And what is Putin offering the West in return for normalising its relations with Damascus, lifting the sanctions and financing Syria's reconstruction? The very thing Europeans and Americans have been demanding for years but have been unable to attain: a political solution to the conflict. 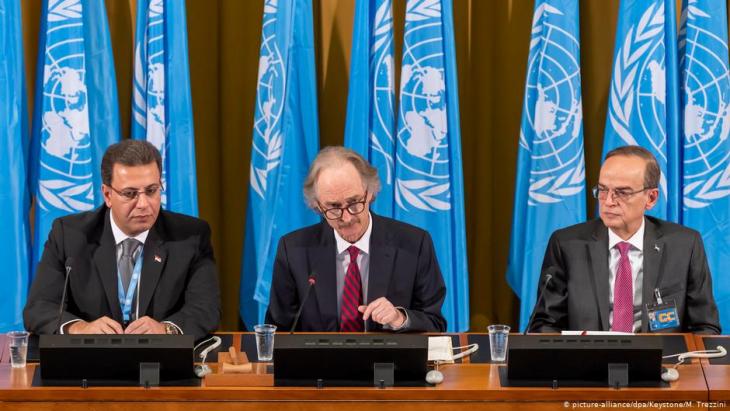 Doubtful prospects of success: "instead of relying on a constitutional committee that lacks credibility among both supporters and opponents of the regime, Germany should instead work towards integrating Syrians in its society, strengthening the Syrian diaspora, and legally prosecuting the crimes committed in Syria," complains Helberg

The first step in that direction is to be taken by the constitutional committee that has been meeting in Geneva since the end of October, under UN mediation. The 150 Syrians on the committee are discussing a new Syrian constitution, with the ultimate goal of holding free elections under UN supervision. But even achieving this goal is an illusion given how the Syrian regime has for years shown no willingness to surrender any of its power.

Even when Assad found himself under pressure in past years, he never gave up his goal of a military victory – which Russia and Iran finally helped him to achieve. He knows that making any real concessions would lead to the collapse of his regime, because it is built on fear, loyalty and clientelism. The constitutional process therefore feigns a political solution to a conflict that has long since been resolved militarily. It is Putin's way of offering Europe a chance to come to terms with Assad's regime while saving face. Putin is also trying to tempt Europe with the prospect of refugees returning to Syria, although Assad certainly does not want them back and is therefore already working to intimidate and expropriate them.

Back to a broken society?

Despite it all, German foreign minister Heiko Maas is still endorsing the idea of sending Syrians home as soon as possible. Only "voluntarily" of course and "if they are safe there", he stresses. But Syria will not be safe until the secret service apparatus is dismantled and those responsible for the crimes of war are brought to justice. Democratic elections require freedom of the press and freedom of opinion, the opportunity to engage in politics and civil society without danger, and state institutions that serve the citizen rather than shoring up the current regime.

After 50 years of fear and enforced conformity, and eight years of unfettered violence, the people of Syria are filled with hatred and their society has been shattered. More important than a constitution, which will have no impact on the mechanisms of power and thus change nothing in people's everyday lives, are efforts towards reconciliation and raising political awareness, efforts that have thus far been possible only outside of Syria – above all in Europe.

Instead of relying on a constitutional committee that lacks credibility among both supporters and opponents of the regime, Germany should instead work towards integrating Syrians in its society, strengthening the Syrian diaspora, and legally prosecuting the crimes committed in Syria.

The political scientist and journalist Kristin Helberg lived in Damascus from 2001 to 2008, where she was the only officially accredited Western correspondent for a long time. For European media, she reported from Syria on the Arab and Islamic world. Today she works as an author and Middle East expert in Berlin.

Libyan political analyst Faraj Alasha argues that the Berlin conference on the Libyan war did nothing to change the fact that there is no political solution to end the war raging ... END_OF_DOCUMENT_TOKEN_TO_BE_REPLACED

As COVID-19 sweeps across the globe, it is forcing religions to adapt and take action to prevent infection. But experts warn against using the crisis to fuel conspiracy theories. ... END_OF_DOCUMENT_TOKEN_TO_BE_REPLACED

Germany continues to believe in the fiction that palm oil obtained from South East Asia to blend with diesel fuel is ecologically sound and climate-friendly. But that belief is ... END_OF_DOCUMENT_TOKEN_TO_BE_REPLACED

On their fourth CD "Irade" (willpower), Masaa has left its piano sound behind, yet continues with its new guitarist to pursue a path that bridges jazz improvisation and Arabic ... END_OF_DOCUMENT_TOKEN_TO_BE_REPLACED

The parties at the centre of Germany's political landscape have often exhorted citizens to distance themselves from the right-wing AfD party. And yet, Europe's response to what is ... END_OF_DOCUMENT_TOKEN_TO_BE_REPLACED

Mohammad Rasoulof’s film "Sheytan Vojud Nadarad" (There is No Evil) won the Berlinale, perpetuating the robust presence of Iranian cinema at the festival during the post-Kosslick ... END_OF_DOCUMENT_TOKEN_TO_BE_REPLACED
Author:
Kristin Helberg
Date:
Mail:
Send via mail

END_OF_DOCUMENT_TOKEN_TO_BE_REPLACED
Social media
and networks
Subscribe to our
newsletter