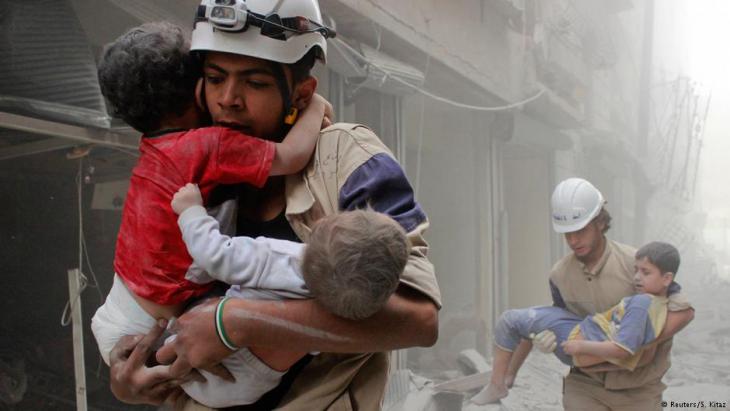 As mass murder takes place in Syria before the eyes of the world, civilian volunteers – such as the Syrian White Helmets – continue to be the subject of an extraordinary propaganda campaign. Instead of facts, this is dominated by fake news and a large dose of inhumanity. By Emran Feroz

There seems to be no end to the horrific reports coming out of the Syrian town of Ghouta. For people in the besieged rebel enclave, Assad’s unceasing hail of bombs is now part and parcel of daily life. Day after day, innocent people are dying once more. Everyone and anyone is a target: women, children, journalists, doctors and other civilians.

The accounts coming out of the hospitals could not be more harrowing. Every day, parents search for their dead children; or children for their dead parents. As the world looks the other way, Ghouta is being annihilated. This is all the Assad regime wants. Some observers are already comparing this colossal crime against humanity to Spain’s Guernica or Bosnia’s Srebrenica.

There are nevertheless also people in Ghouta who are doing what they can to alleviate the suffering. Day after day, members of the Syria Civil Defence organisation are saving lives. They issue warnings, conduct evacuations, salvage people from ruined buildings and provide the first aid that is otherwise barely available. In all cases, they are risking their own lives. Many White Helmets have already been killed in the bombing raids.

Most people have now heard of this civil protection organisation, which is active in Syria’s rebel-held areas. There have been films and prizes, including an Oscar and a Nobel Peace Prize nomination – and although these things have done little or nothing to change Syria’s reality, one thing is at least clear: the White Helmets are admired for their engagement and bravery by many – but not by all.

Many rumours, lies and conspiracy theories concerning the White Helmets have been circulating since the emergence of the organisation. The emergency workers are obviously a thorn in the side of many actors in this conflict. For example, one of the most popular rumours is that the White Helmets are "terrorists", in league with al-Qaida, IS or some other extremist group. 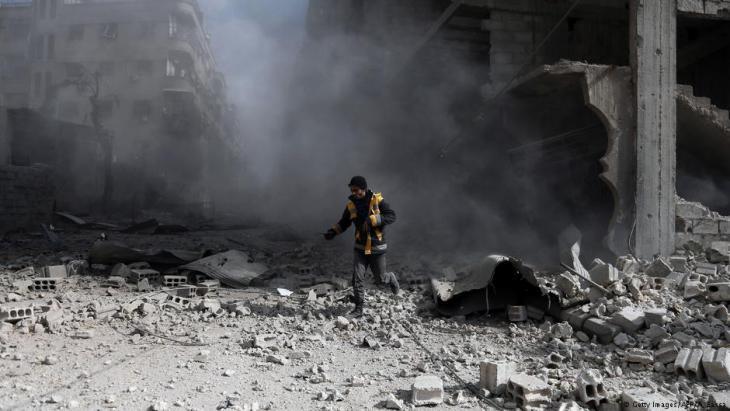 "Hell on earth": the colossal crime against humanity unfolding in East Ghouta has already been compared by some observers to Spain’s Guernica or Bosnia’s Srebrenica. Despite the agreed ceasefire, the UN has confirmed that fighting continues in the rebel-held area of Syria. Some 400,000 people are all but cut off from the outside world. According to aid workers the humanitarian situation is dramatic, particularly since aid convoys have been unable to penetrate the area for months. The Syrian opposition has accused Assad of trying to starve out East Ghouta

This claim is not only regularly disseminated by dictator Bashar al-Assad and his supporters in Moscow and Tehran, but also by many alternative news sites in English- and German-speaking countries.

Many media outlets that identify themselves as "left wing" or "anti-Imperialist" also take aim at the White Helmets. Instead of reporting on the crimes of Assad, they choose to cast doubt on information coming from the rescue teams on the ground – which has now grown to a substantial amount.

After all, in the regions attacked by Assad’s army and its allies, the White Helmets were one of the few organisations to document the atrocities. That someone is on hand, not only to save lives, but also to disclose the war crimes of the Russian military, is a source of great irritation for the Kremlin in particular. For this reason, the Russian state media outlet RT (“Russia Today”) was from the outset part of the media Goliath taking a stand against the White Helmets and airing regular defamatory reports about the organisation.

By stage-managing his re-election in a poll widely dismissed as a farce, Syria's President Bashar al-Assad has killed two birds with one stone: he has forced his compatriots to ... END_OF_DOCUMENT_TOKEN_TO_BE_REPLACED

Although a unity government was formed in Libya in March 2021, tensions and possible crises between the political actors are already emerging. What problems does the country face ... END_OF_DOCUMENT_TOKEN_TO_BE_REPLACED

Syria's president appears to have triumphed. He remains in power, the Syrian conflict is nearly over, and efforts are underway in the Arab world to normalise relations with his ... END_OF_DOCUMENT_TOKEN_TO_BE_REPLACED

The neo-Ottomanism propagated by Erdogan has long been more than rhetoric and symbolic politics. This can be seen from recent developments in parts of northern Syria, where Turkey ... END_OF_DOCUMENT_TOKEN_TO_BE_REPLACED

Researchers agree that climate change alone cannot be blamed for the outbreak of war in Syria in 2011. However, neither can it be ignored as a reason this once blossoming country ... END_OF_DOCUMENT_TOKEN_TO_BE_REPLACED

The Syrian war has moved through many phases and included a number of changing actors. But one aspect has remained constant throughout: the Assad regime is using the conflict to ... END_OF_DOCUMENT_TOKEN_TO_BE_REPLACED
Author:
Emran Feroz
Date:
Mail:
Send via mail

END_OF_DOCUMENT_TOKEN_TO_BE_REPLACED
Social media
and networks
Subscribe to our
newsletter