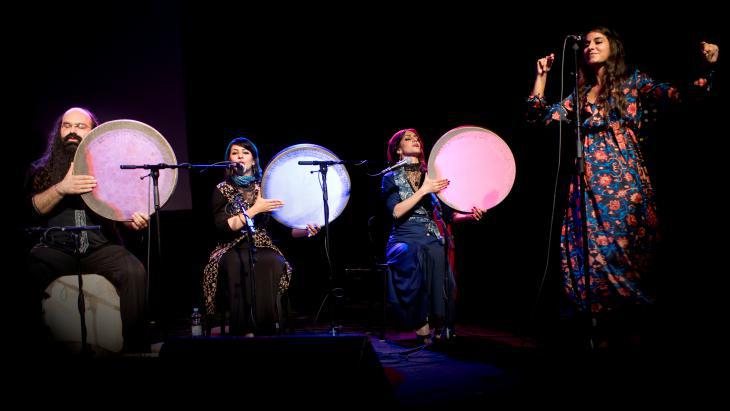 The Freiburg-based "Tamburi Mundi" music festival celebrated its tenth anniversary in special fashion this year by bringing together musicians from Isfahan and Tel Aviv. Far from the political tensions one might expect from representatives of these two cities, this get-together was all about friendship and harmonious unity. By Stefan Franzen

"It is not our job to tell the politicians that they should get along," explained percussionist and festival veteran Maryam Hatef before the concert. "For me, it is much more about showing ordinary people that, in my own way, which is musically, I can play with anyone in the world. This is a concert with friends."

She and partner Mohsen Taherzadeh, likewise a valued festival participant of long standing, stressed that they saw themselves as citizens of the world, free from any exclusive attachment to a single culture. The two Isfahanis are seasoned stage performers, be it in partnership with Israelis, Palestinians or Americans.

The sense of being at ease between cultures was echoed by "Tamburi Mundi" newcomer Michal Elia Kamal. "The mixture of Israeli and Iranian culture is just normal for me. It is something I remember from home." The vocalist grew up in a Jewish family that fled from Iran after the revolution. They ended up in Tel Aviv, where she grew up. She now lives in Istanbul. "I was brought up in a very conventional Persian home, with its typical wall hangings and traditional food. But outside the house, I was exposed to a very different, European-style modern environment where everyone was searching for their new Israeli identity. On stage in Freiburg, I can be completely myself."

Symbolic breaking down of barriers

Festival director and German-Turkish percussionist Murat Coskun's idea of arranging a musical get-together of this sort for the opening concert of the "Tamburi Mundi" anniversary festival was particularly apt. After all, the frame drum – a percussion instrument whose pulsating beat symbolises the breaking down of restrictive barriers everywhere, from the beaches of Brazil to the steppes of central Asia, from the markets of Marrakech to the pubs of Ireland – is a ubiquitous instrument at this festival.

When musicians from cities that have been declared by their governments to be enemies meet, the breaking down of barriers has a special symbolic power. But, of course, the ability to infuse such symbolism with life requires the mastery of one's art.

Hatef, Taherzadeh and Kamal were joined on stage by two musicians from Tel Aviv, Yshai Afterman and Itamar Erez: the drumming of the former delves deep into the realms of eastern rhythm, a skill crafted with the help of a Persian music teacher, while the latter's quarter-tone guitar-playing skilfully blends Middle Eastern and jazz influences. The final member of the ensemble was the young virtuoso Arezoo Rezvani on the Persian santur. Her sensitive playing was beautifully responsive to every one of the evening's musical contexts.

These six musicians showcased their friendship in a dramatically compelling and – just as important – personally moving experience. Right from the opening beats, the synthesis worked beautifully, as the Persian daf, the Iberian cajón and an illuminated delicately brushed Israeli drum laid down a lively triple percussion rhythm under an unusual dialogue: Arezoo Resvani's deftly fluid lines on the santur, intricately intertwined with the guitar of Itamar Erez, his special instrument adding a touch of flamenco colour to the mix.

The sextet adapted Sephardic traditions when Michal Elia Kamal joined in. Her feisty, passionate voice resolving into a cry of sheer joy at the end of long notes was complemented by her expressive dance-like gestures. 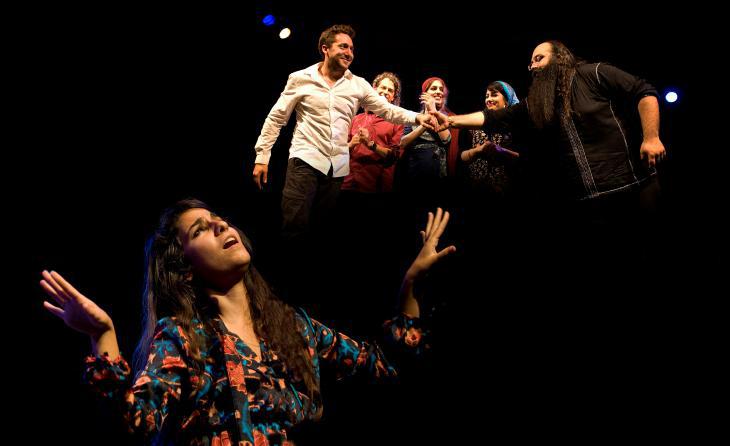 A musical dialogue between Tel Aviv and Isfahan: the sextet adapted Sephardic tradition when Michal Elia Kamal joined in. Her feisty, passionate voice resolving into a cry of sheer joy at the end of long notes was complemented by her expressive dancing.

A treat, no matter what the constellation

An appealing aspect of the evening was also provided by the smaller combinations of musicians. Mohsen Taherzadeh's soulful Sufi singing and his percussive style on the long-necked tar lute created a particularly spiritual atmosphere in combination with Hatef's stirring daf rhythms. A contrasting response was provided by Erez and compatriot Yshai Afterman with their leisurely trotting composition "Desert Sun".

Afterman is the master of multi-tasking, investing his frame drum with a jazzy touch through the addition of cymbals. A centre-piece was provided by a highly concentrated bravura demonstration of drumming tradition when Taherzadeh whipped up a storm of drumming rain on the daf, evoking a sound reminiscent of the pulsating rhythms of the Brazilian berimbau. By contrast, Afterman's playing was altogether more airily elemental, his dancing fingers enticing, light effervescent explosions from the tof, an instrument once played by the prophetess Miriam.

The evening concluded with a magnificent vocal finale: Kamal evoked the language of her ancestors by beginning a traditional and melancholic song in Farsi, her five fellow musicians then responding in chorus.

The ancient connections between Maryam and Miriam, between daf and tof, were impressively recreated here with the help of a group of musicians from two of Freiburg's twinned cities, artists who, though far from home, are bound by bonds of friendship.

Germany is often lauded for its atonement for its Nazi past. Yet the country upheld the structures that allowed – and allow – racism to flourish and Germanness to be intertwined ... END_OF_DOCUMENT_TOKEN_TO_BE_REPLACED

Five years after the Joint Comprehensive Plan of Action was concluded, it is on life support, following the US's reinstatement of sanctions and Iran's return to enrichment ... END_OF_DOCUMENT_TOKEN_TO_BE_REPLACED

Mikhal Dekel’s father was part of a contingent of Jewish children who went on an odyssey from Poland to Iran as a result of the Holocaust. Dekel has now written a book exploring ... END_OF_DOCUMENT_TOKEN_TO_BE_REPLACED

The protests against police violence in the USA have triggered a discussion in Germany about discrimination, immigration and the country's image of itself. Why are people who do ... END_OF_DOCUMENT_TOKEN_TO_BE_REPLACED

Journalist Michel Abdollahi was born in Tehran in 1981 and moved to Hamburg in 1986. His big breakthrough came with his television documentaries on social issues such as ... END_OF_DOCUMENT_TOKEN_TO_BE_REPLACED

END_OF_DOCUMENT_TOKEN_TO_BE_REPLACED
Social media
and networks
Subscribe to our
newsletter