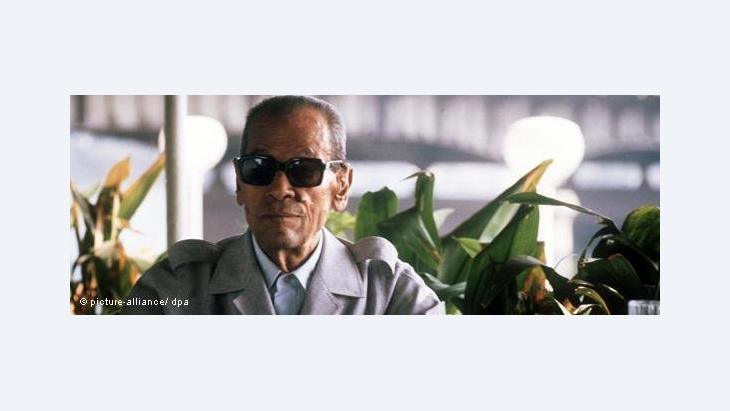 He was the first writer in the Arab world to win the Nobel Prize for Literature – an honour he retains to this day: the great Egyptian storyteller and novelist Naguib Mahfouz, whose biography spanned almost a century, but who rarely left his home city of Cairo. By Hartmut Fähndrich

The shock is immense, the scene spine-chilling. In Cairo and, as it turns out, elsewhere – indeed worldwide – the works of Naguib Mahfouz are no longer to be found. Initially just a rumour, it soon turns out to be accurate: the famous novels have disappeared from the shelves of bookstores, as well as from public and private libraries.

The public authorities responsible for culture and national heritage set about reconstructing the works of the great master, by looking for people who can recite passages by heart, or translating the books back out of other languages. All in vain. The whole scenario takes on an even more spooky dimension as rumours begin to surface that people have been sighted on the streets of Cairo that closely resemble characters from Naguib Mahfouz's novels.

This fantastical story is a strand of a novel published two years ago entitled Abna al-Gabalawi ("Gabalawi's Children", to date only available in Arabic) by Ibrahim Farghali, an Egyptian author two generations younger than Naguib Mahfouz. His tome, which runs to almost 500 pages, shows a society completely permeated by characters introduced to Egypt by its great literary son.

Like no other Arab writer before or since, Naguib Mahfouz became the chronicler of his nation and his people. He was born 100 years ago on 11 December 1911 in Cairo, a city he only left on very few occasions during his 95-year life. He experienced the entire "short twentieth century" (Eric Hobsbawm) in Egypt, and his work reflects its various stages. For anyone wanting to fully comprehend the nature of Egyptian society during this period, there can be no substitute for reading Mahfouz's novels.

Yet his works are not solely a depiction of social structures, individuals and institutions. Mahfouz's early literary work is marked by its engagement with a nationalist Egyptian ideology that became popular in the 1920s and 1930s: Pharaonism.

This recourse to the nation's past, which stretches back several thousand years and evidently fascinated the author from the early 1930s, served and still serves to confirm Egypt's individual, specific character. It not only defined the nation as independent with respect to the European occupying power Great Britain, but also with respect to other parts of the Arab and Islamic world. Since the 1920s, ancient regional history has repeatedly helped almost all West Asian and North African nations to form a nationalist view of history.

In three novels published in 1939, 1943 and 1944, Naguib Mahfouz uses subjects and individuals from Egypt's Pharaonic past, although intended parallels with the rule of the British which, variously organised, lasted from 1882 until 1956, remain absolutely recognisable. For example the third of these novels, Thebes at War, describes how the Egyptians defended themselves against foreign invaders, the Hyksos.

​​But Naguib Mahfouz's true breakthrough came later, with the publication of novels that addressed contemporary Egyptian history in a direct, unalienated and "realistic" way. Five novels published in the second half of the 1940s usher in this period in a most impressive manner. Material, moral and metaphysical questions are dealt with in these works, which portray a society undergoing ever more rapid change.

The novel Cairo Modern – probably first published in 1946 and only recently available in German translation – can be read, without doing it any injustice, as an illustration of conditions that, viewed from a slightly different, globalised viewpoint, led to the toppling of President Hosni Mubarak decades later: the almost boundless corruption and depravity of the ruling classes and the misery, confinement and lack of prospects for the younger middle class. The King is however spared these attacks!

The story is as malicious as it is racy. It is a Brave New World à l'égyptienne. It is worth bearing in mind that we are still in a time before the July revolution of 1952, a revolution often branded as the root of all evil, the revolution of the "Free Officers" under Gamal Abdel Nasser.

Using money and charm, a high-ranking ministerial official seduces a young girl and then arranges for a poverty-stricken university graduate to marry her so that he can still continue to see her regularly. The student is rewarded with a ministerial post and other benefits. His benefactor rises to the status of minister. But the house of cards collapses when a figure in the hierarchy of corruption is passed over and seeks revenge. This character brings about the downfall of the corrupt, using their own weapon to do so. The characters with integrity remain marginal, even if they come off less badly at the end. The moral that triumphs is actually a tarnished one; the better future has not begun.

This series of novels ends with the large-scale Buddenbrooks-style saga known as the Cairo Trilogy, which finally established Naguib Mahfouz as Egypt's leading literary figure. The work follows three generations of a middle class family in Cairo over a period lasting from the end of the First World War until after the Second World War. The saga shows how the family gradually distances itself from the old patriarch Abdel Gawad, through his sons and daughters and his two grandchildren, of which one turns to the Communists and the other to the Muslim Brotherhood. This occurs immediately after the Second World War, shortly before the revolts of Gamal Abdel Nasser and his Free Officers in the year 1952.

Sensitive seismograph that he was, Naguib Mahfouz did not fail to notice that the division of the population into religious and non- or areligious – a factor that continues to play a key role in the current restructuring of the nation – was already in evidence at the time. ﻿Mahfouz viewed himself as secular. 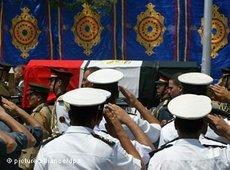 Mahfouz the national treasure: the Nobel laureate is a giant of Arabic literature, to date the only Egyptian ever to have won the prestigious prize

​​In the almost 40 years that followed, Naguib Mahfouz managed to retain this capacity to act as a seismograph of social changes and developmental tendencies. Numerous novels and stories focus on the things for which humans search: happiness, money, security, the father, spiritual experience or the past. What is the human being? Regardless of how banal the question may sound, it becomes a central one for the Egyptian Nobel Prize laureate of 1988. In order to repeatedly pursue it from all angles, he continually invents new characters, most of which are derived from his own social milieu: the intellectual and salaried members of the lower middle class.

In Miramar (1967), people with various ideologies and origins display variants of Egyptian ideas and practice or the inner turmoil of society. In Adrift on the Nile (1966), a group of frustrated and opportunist friends seek comfort in drugs and eschew social responsibility. In The Thief and the Dogs (1961), a thief released from prison is intent on avenging those who put him there and in his dogged battle for justice, he sinks deeper and deeper into trouble.

All these novels, which are among the author's best known and were swiftly adapted for the screen, display an overriding sense of alienation and indignation, feelings that characterised the prevailing mood of many Egyptians during the last Mubarak era, and which eventually led to the outpouring of displeasure in January of this year. In one story, such as that told in the short novel The Day the Leader Was Killed (1985), one can be forgiven for wondering whether, from a contemporary point of view, the story is a description of the murder of President Anwar Sadat or a prophecy of the ousting of Hosni Mubarak. Such is the extent of the material and social humiliation of the protagonist in the novel, that every conceivable kind of reaction must be expected.

Now and again, Mahfouz published novels that did not fit the mould of realistic social portrayal. Often in these works, in the search for the (religious) meaning of life, Mahfouz goes one step further. The Children of the Alley (1959) – that perhaps rather too lengthy allegory on the phenomenon of monotheist religion initially published in instalments in a newspaper – became well known when it found little favour with many spiritual leaders. For this reason, it was a long time before it was published in book form in Egypt. 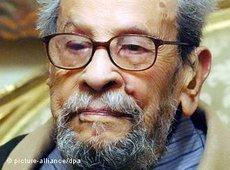 According to Hartmut Fähndrich, Mahfouz's final books were "heavily suffused with the nostalgia of age"; by this stage, Mahfouz had written his great narratives and devoted himself to "appraising himself with regard to his origins, the life that he had lived and the death that was soon to come"

​​The novel depicts a microcosm in a city, easily recognisable as Cairo, in which usurpers use material and physical violence to suppress and torment the population. There are many attempts to rail against this tyranny, each of which crystallises around individuals whose life stories and lines of reasoning point to Moses, Jesus and Mohammed. Each of the three manages for a short time to achieve the best result for his supporters and takes it upon himself to fulfil the wishes of the patriarch Gebelawi, who lives in a villa somewhere outside the city – Old Paradise. The fourth "saviour" no longer defers to this ancestral figure, but sets out to fathom his secret, which eventually leads to Gebelawi's death.

This pseudo-realistic portrayal casts doubt on the legend, on the myth. The author voices quite explicit and pronounced doubts over the sustainability of old and new messages of salvation, a doubt that also includes the modern sciences – not that this protected the author from the wrath of some religious guardians, who repeatedly locked horns with Mahfouz and other writers.

Until now, no Arab writer has been able to equal Naguib Mahfouz's greatness, particularly in Egypt. It is not only his characters that have attained a "classic" status comparable with those of great characters in German literature such as K., Effi Briest or Oskar Matzerath – all the more so because of the many film versions that have been made of his works – his frequently associative style and his particular brand of fiction have become milestones in Arabic literature.

The same also applies to his last books, heavily suffused with the nostalgia of age, for example Echoes of an Autobiography (1994): reminiscences of the utmost brevity, reflections on things that have elapsed and passed by in a highly poetical language and, now and again harking back to a former style, a language inflected by Sufism or Islamic mysticism. This work focussed exclusively on the highly intimate, the existential questions. The great narratives had been written. Naguib Mahfouz the man was appraising himself with regard to his origins, the life that he had lived and the death that was soon to come.

By the time a statue was erected in his honour in Cairo in 2003, Naguib Mahfouz was already a legend in his own lifetime – a literary, ideological and moral authority. He died on 30 August 2006 in the city of his birth.

Hartmut Fähndrich has been a lecturer in Arabic Studies at the ETH Zurich since 1978. He has translated several dozen works of contemporary Arabic literature into German, and is the author of a monograph on Naguib Mahfouz (Edition Text + Kritik, 1991).

Translated from the Germany by Nina Coon

Home
Print
Newsletter
More on this topic
Naguib Mahfouz's influence on Arabic Literature: In the Shadow of the MasterNaguib Mahfouz's "Children of the Alley": Almost Half a Century of Self-CensorshipRemebering Naguib Mahfouz: Rendezvous at Café Ali BabaObituary for Doris Kilias: Naguib Mahfouz's German Voice
Related Topics
All Topics
Date:
Mail:
Send via mail

END_OF_DOCUMENT_TOKEN_TO_BE_REPLACED
Social media
and networks
Subscribe to our
newsletter