The interplay of gnawa groups with famous jazz, pop and blues musicians from all over the world is the trademark of Morocco's Essauira festival. Why exactly does gnawa exert such a fascination over international musicians? Andreas Kirchgäßner takes a look 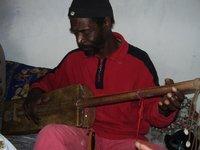 A gnawa playing his gembri, a three-string bass guitar - the tradition of famous international jazz, pop and blues musicians goes back well into the 1960s

​​Distorted music blaring from the pirate CD shop. Shouts from men with handcarts who can't get past with their heavy loads. The beeping of thousands of mobile phones. Mothers' shrill warnings to their provocatively dressed daughters. If you want to get through the alleyways, all you can do is go with the flow. It's impossible to go against it.

Half Morocco seems to be on the way to the gnawa festival in Essaouira. This town of 60,000 inhabitants is expecting more than 450,000 visitors – most of them Moroccans, because gnawa music is popular here, and entrance to the festival is free.

Drop-outs and hippies and Jimi Hendrix

However, the nine stages that transform the whole of the medina into a performance area are teeming with foreign musicians. The concept of 'fusion', the interplay of gnawa groups with famous jazz, pop and blues musicians from all over the world, is the trademark of this festival.

Essaouira is town of 60,000 inhabitants. The festival is often attended by more than 450,000 visitors

​​Over there the laid-back young gnawa master Maâlem Hasssan Boussou from Casablanca is playing, with sunglasses on. His group whirls across the stage, all of them wearing silly hats; they're clicking the metal castanets, krakebs, that sound like saucepan lids being banged together. Accompanying them is the American pianist Scott Kinsey, best known for his music for the film Ocean's Eleven.

These 'fusions' are not the invention of the festival organisers. It's a tradition in Essaouria that goes back well into the 1960s. Back then the jazz pianist Randy Weston discovered gnawa trance music and stayed in Morocco for a while to study it and make recordings with leading gnawa musicians. Later, in the 1970s, when Morocco became a travel destination for drop-outs and hippies, Jimi Hendrix also came here. 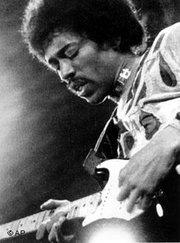 ​​The rhythms of the drums and the metal castanets; the sound of the gembri, a three-stringed bass lute played with hard, slapping strokes – gnawa turned him on. Hendrix enjoyed making music with the gnawa players; he called this type of cross-border improvisation 'Experience'. Some of the older gnawi still remember the 'black brother'. Some of them claim to have played with him.

Back then nobody thought of recording the sessions, for no one in Essaouira dreamed that one day this guitarist would write rock music history. After Hendrix, all of them came: Cat Stevens, Bob Marley, Peter Gabriel, Carlos Santana, Led Zeppelin, right up to the modern dance floor musicians. But what is it about gnawa music that exerts such an enduring fascination over international musicians of rock, blues, jazz and pop?

The word gnawa comes from the designation Guinea, and refers to the region of the modern West African states Mauritania, Senegal, Niger and Mali. In the 11th century slave traders began the mass transportation of prisoners from this region to sugarcane plantations in southern Morocco in the area around what is now Essaouira.

From the 16th century onwards many of the slaves were shipped on from here – the former Mogador – to foreign destinations. Wherever the West Africans ended up they established their own cults and rituals, their belief in the world of the spirits, and their music. In Morocco this took the form of a brotherhood of 'folk Islam'.

Lacking a holy man, a marabou, whom they could have worshipped, they declared Sidi Bilal, the black slave of the Prophet, their ancestor. Sidi Bilal converted from Christianity to Islam during Mohammed's lifetime. The prophet rewarded him by granting him his freedom and making him the first muezzin. In the name of Sidi Bilal the gnawa established their zawiyas, holy shrines, to which they make pilgrimages.

Mustafa Samir, a dealer in wooden artefacts, sits at the table. He has known the gnawa since he was a child. They are as much a part of Essaouira as thuja wood, the sea, and the fish, he says. He also knows them as dealers in wooden artefacts, because a gnawa maâlem is usually a carpenter as well.

Mustafa says that none of the gnawa masters in Essaouira who have played with international stars have ever managed to strike it rich. I ask whether this is the record companies' fault. He insists that it's because the gnawa can't handle money. They're in another world much of the time, off with the spirits whom they summon in lilas, trance rituals that can go on for nights on end.

The gnawas' spiritual beliefs are far from being peculiar to Morocco. Wherever they ended up, the black Africans brought their beliefs along with them. In Egypt, this type of worhip is called sar cult. In the Caribbean it is known as voodoo, while in Brazil they call it macumba, umbanda, candomblé. And along with the rituals they also brought their music. In the United States it became African-American blues. 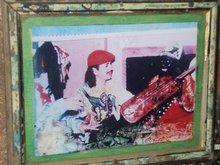 ​​Today, at the festival, US blues guitarist Corey Harris has no problem playing with gnawa master Abdelkader Amlil and his group. Whoever the traditional gnawa groups are making fusion music with, they remain musically true to themselves, almost as if they had to obey spiritual rites in the jam sessions as well.

The world musicians, on the other hand, are clearly able to take up the traditional rhythms and melodies with ease. Apparently there is a structural relationship between the musical styles that seem, on the face of it, so different.

The musicologist Philip Schuyler, who has been researching in Morocco for decades, points out to me the structural commonalities of gnawa, jazz, blues and pop. He cites the 'call and response' pattern: the master sings something, and the chorus answers. Then there are the polyrhythmic drums the Africans have disseminated throughout the world, and above all the gembri, with which the head of the group leads the other musicians like a lead guitarist his rock band.

The gembi melodies offer themselves as a bass line over which the world musicians can improvise, says Schuyler. As in jazz and blues, and unlike the traditional music of North Africa, these melodies are pentatonic.

When jazz and pop musicians meet and play with the gnawa, it's as if their joint improvisation awakens a memory of a common West African childhood. It's a memory that seems to be hidden deep within the music itself, only coming to light when the musicians play together. Often, in the process, surprisingly new musical forms are created – the secret of the attraction exerted by the Essaouira festival.

Pat Jabbar's Dub Music
The Arab Beat from Switzerland
Already in the mid-1980s, Pat Jabbar and his band Aisha Kandisha's Jarring Effects mixed Arab traditional music with dub, trance and house elements. Stefan Franzen talked to Jabbar about his label and the collaboration with the "Pope of Dub", Bill Laswell

END_OF_DOCUMENT_TOKEN_TO_BE_REPLACED
Social media
and networks
Subscribe to our
newsletter