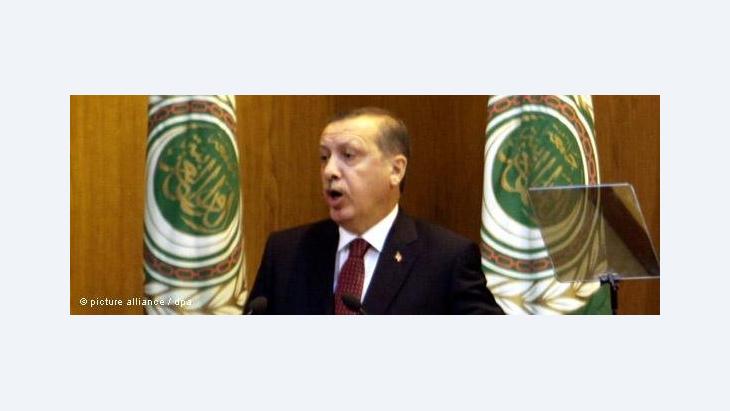 Secularism as a Protector of Religion

﻿On his latest visit to Cairo, Turkey's prime minister Erdogan had a message for supporters of political Islam – that state should not get involved in the religion of the people, and should maintain the same distance to all religions. A slap in the face for unreconstructed opponents of secularism, says Khaled Hroub

Turkish Prime Minister Recep Tayyip Erdogan's advice to the Egyptians, to draw up a constitution based on the "principles of secularism and respect for all religions, and guaranteeing each and everyone the freedom to practice his religion," has surely left Islamists and Salafists in Egypt incensed.

But this lesson on secularism and the civil state, delivered to the Arab Islamists by the Turkish premier during a television interview on his last visit to Cairo, definitely came at the right time. Even post-Arab Spring, most narrow-minded Arab Islamists continue to regard secularism per se as the "brother of faithlessness" and the "enemy of religion".

To date, this secularism to which they have been so fiercely hostile has not been introduced in any Arab country in the same manner as in Turkey, where Atatürk's military chose its most radical form. Consequently it can be assumed that political Islam in Turkey appears as the definitive opponent of secularism – a radical approach that has struck it to the very core. 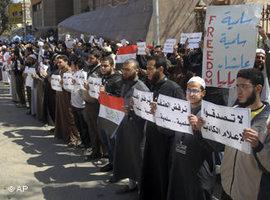 "Is it not a disgrace that in the West, Muslims of all confessions live in peace and mutual respect under the conditions of secularism, while in each of their Islamic nations, they fail to create social harmony and mutual respect for one another," Khaled Hroub asks

​​But in actual fact, here of all places modern Turkish Islamists have set themselves on a course marked by a maturity that has enabled them to recognize the true essence of moderate secularism – a secularism that neither labels religion as the enemy, nor persecutes its manifestations in the hearts of the people, in houses of worship, or on the headscarf issue.

All that secularism wants in principle is the private adherence to religion at home, in places of prayer and on religious occasions – not a religion that dominates and steers the public domain, in particular politics, thereby becoming a behemoth that represses the freedom of others.

Apart from restrictions on the wearing of the face veil ("Niqab"), which has been banned in several European countries due to occasional improper use, secular law guarantees Muslims here the right to carry out their religious rituals. Had Europe realized even just one of the concepts for a religious state envisaged by Arab Islamists for their nations, then life really would have been hell for the 40 million Muslims living in the West.

One could retort that secularism is simply better suited to the West, that it offers a solution to the conflict between politics and the church – whereas such a conflict is unknown in the culture, way of life and history of Islam, a commonly-held belief. But this perception is historically incorrect. It is a mawkish and selective Islamist reading of history. In actual fact, politics and social life in Islam have been gradually but continually secularized since the installation of the first progressive caliphs.

The bitter conflict over the leadership of the Caliphate was a political row, not a religious one. During the three historic epochs in which the power and the culture of the Muslims attained its zenith, the political practice and actions of the ruling class underwent an almost complete secularization. 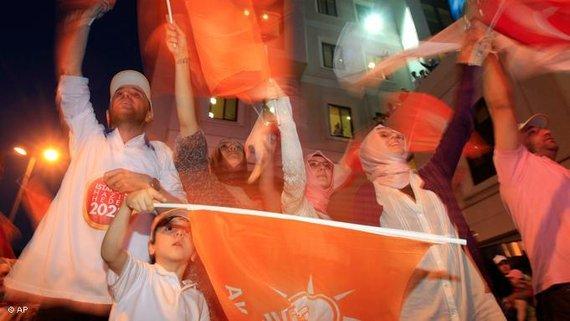 A model for success for moderate Islamists in the Arab world? In a renunciation of the conservative Islamists, Erdogan formed his "Justice and Development Party" (AKP) in 2001. He led the party to power after just over a year, ushering in an economic upswing and an unprecedented phase of political stability for Turkey

Thanks to this Islamic secularization and the unconditional acceptance of the acquisition of knowledge and the creativity of all individuals, the sciences flourished resulting in progress and pre-eminence – something gladly and frequently cited in the Islamic world.

Secularism is not anti-religion

So whenever contemporary Islamists refer to the "Islamic civilization" and the "golden age of Islam", they are referring to various versions of the "Erdogan secularism model", which was introduced in one form or the other by Muslim rulers at the time, even if "secularism" itself was not yet a familiar concept.

If the Umayyads, Abbasids or even the Muslims in Andalusia had operated a system such as that envisaged by the Muslim Brotherhood or the Salafists, with their blinkered and dogmatic approach to politics, state and society, Muslims would most certainly have not progressed at all, and would not have achieved what they have to date.

Erdogan's message to the Islamists in Cairo was that the state should not get involved in the religion of the people, and that it should maintain the same distance to all religions. The state must be secular, although secularism is not about being an enemy of religion, but rather a guarantee that everyone is allowed to practice their faith. The state that the Arab Islamists have in mind is a religious state that imposes religion on every individual and of course only knows one single interpretation of religion.

Which of the Islamic states proposed by today's Muslim Brothers or Salafists would accept total freedom of other religions and convictions such as Christianity, Judaism, Hinduism or Sikhism? Which of these states would guarantee freedom and security to the Islamic confessions that do not suit whichever Islamist authority happens to be in power, for example the various Shiite schools, the Ismailites, the Baha'i, the Ahmadiyya movement etc.?

Is it not a disgrace that in the West, Muslims of all confessions live in peace and mutual respect under the conditions of secularism, while in each of their Islamic nations, they fail to create social harmony and mutual respect for one another?

The successful approach of Turkish Islamists

The Erdogan brand of Islam in Turkey, but also the Malaysian and Indonesian examples, offer models quite different from that envisaged by Arab Islamists. However they cannot serve to justify deliberations that the problem could lie in the Arab context, in the culture of the Arabs or their understanding of Islam, after all, the Iranian and Pakistani brands of Islam have also failed. 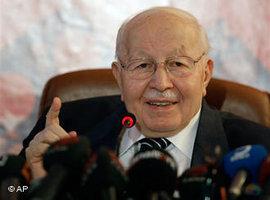 Éminence grise of political Islam in Turkey: Conservative Islamist Necmettin Erbakan eventually failed to put his stamp on the Islamist movement and assert himself against the progressive, moderate representatives of the AKP

​​The approach of the Turkish Islamists was successful because it appropriated the important historic lessons on the politics of the state and society, and an understanding of its priorities. This consciousness was reflected in the emergence and foundation of the AKP, when the traditional views held now by the Muslim Brotherhood were dispensed with, an ethos adhered to for decades by Necmettin Erbakan, a code of beliefs which led to his eventual failure at his task of leading the Turkish nation.

When the AKP was formed at the beginning of the millennium, it overhauled all its concepts, integrated moderate secularism into its programme and focused its attentions on the real priorities for the Turkish state and its society, by starting with the economy and then moving to satisfy all other sectors of society. Supporters of the party included conservative businesspeople, technocrats and other right-of-centre groups, although not all of them especially religious in character.

But their combined qualities coalesced in a symbiosis with the positive, practical values of religion – for example integrity, reliability and a serious work ethic, values adhered to by Erdogan and his group, and heeded on a local administration level. The Turkish economy recovered because it was the primary focus of political efforts. In this way, Turkey advanced to the status of "economic tiger", one that can definitely hold its own with the world's leading economies.

If Erdogan had, like the Arab Islamists, focused primarily on issues such as the wearing of headscarves, or banning women from wearing bikinis or smoking waterpipes, then his policies would have quite certainly failed across the board today.

Dr. Khaled Hroub is Director of the Cambridge Arab Media Project (CAMP) at the Centre of Middle Eastern and Islamic Studies (CMEIS) at the University of Cambridge. A well-known journalist, he writes for leading Arab newspapers such as Al-Hayat and Al-Bayan and also presents programmes on the television channel Al-Jazeera. He has published a number of books, including "Hamas: A Beginner's Guide", and "Hamas: Political Thought and Practice".

Hosting major sports tournaments can confer prestige on a country, but in the case of Egypt, the 2021 Handball World Championship will do little to repair relations with either ... END_OF_DOCUMENT_TOKEN_TO_BE_REPLACED

As the photo of Fairouz talking to French President Emmanuel Macron spread around the world, many asked if Arabs today had any contemporary stars of Fairouz's standing. In this ... END_OF_DOCUMENT_TOKEN_TO_BE_REPLACED

Saudi Arabia and its allies have agreed to set aside their differences with Qatar at a summit meeting of the Gulf Cooperation Council. The restoration of diplomatic relations ... END_OF_DOCUMENT_TOKEN_TO_BE_REPLACED

Many in the West equate Middle Eastern music with the folklore of "A Thousand and One Nights". Tayfun Guttstadt demonstrates just how erroneous this is END_OF_DOCUMENT_TOKEN_TO_BE_REPLACED

Ten years after the start of the Arabellion in North Africa and the Middle East, many view the movement as a failure. But rather than being over, it has now entered a more mature ... END_OF_DOCUMENT_TOKEN_TO_BE_REPLACED

END_OF_DOCUMENT_TOKEN_TO_BE_REPLACED
Social media
and networks
Subscribe to our
newsletter