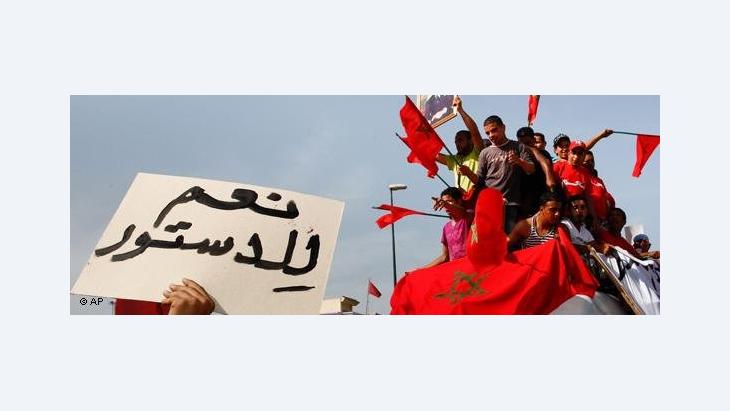 The Arab Spring in Morocco
Reform without Regime Change

﻿Moha Ennaji, Professor of Cultural and Gender Studies at Sidi Mohamed Ben Abdellah University, examines the many political changes underway in Morocco and explains why, unlike in other countries in the region, protesters are not demanding regime change

Influenced by the events in Egypt and Tunisia, Moroccans have been demanding political and constitutional rights that would give citizens greater influence in government affairs. But unlike their neighbours, Moroccans have not made large-scale calls for regime change.

This difference should not be seen as complacence. Instead, it stems from a desire to hold on to the monarchy while simultaneously applying pressure for democratic reform.

The monarchy is deeply rooted in Moroccan culture and enjoys a great deal of legitimacy. In fact, since taking power in 1999, King Mohammed VI has effectively implemented several reforms, most notably guaranteeing women greater rights and equality with men, and establishing the Equity and Reconciliation Council in 2004 to document cases of forced disappearances and arbitrary detention during the former king's brutal reign.

Power to the people

In a speech earlier this year, King Mohammed VI responded to the demands of protesters by starting a reform process that will lead to a separation of executive, legislative and judiciary powers. 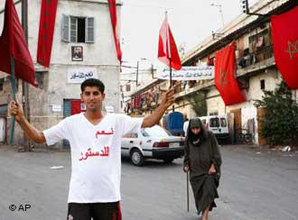 Fine balancing act: "Moroccans desire to hold on to the monarchy while simultaneously applying pressure for democratic reform," writes Moha Ennaji. Pictured: A man wearing a t-shirt that reads "I say yes to the constitution"

​​Within the executive branch, the government is comprised of the prime minister and ministers and is accountable to the legislative power represented by the parliament. The judiciary will become independent from the legislative and the executive branches. These reforms will empower the cabinet, parliament and judiciary – and ultimately the people.

The King also announced the implementation of a series of reforms that would enhance individual liberties, human rights and gender equality. He recognised Amazigh, the mother tongue of Moroccan Berbers, as an official language alongside Arabic, another of the protesters' demands.

Instead of resorting to force to quell the movement, as was the case in other Arab countries, the Moroccan government relied predominantly on peaceful talks and negotiations. And after several months of dialogue between various activists and political parties, on 1 July a new constitution was voted in by the vast majority of the population.

New amendments ensure that the kingdom will, in a year's time, be transformed into a parliamentary monarchy with free and fair elections. Further decentralisation will shift more power and resources from the political centre to the regions. This means that the constitutional revisions will empower regional councils that are directly elected by voters.

The most-heralded reform is that the prime minister will be appointed from the party that wins parliamentary elections and be given authority over the cabinet. The constitution specifies the shift of executive power from the king to the prime minister in that the latter will serve as the head of the executive branch and be fully responsible for the government, the civil service, as well as the implementation of the government's agenda.

The reform process will begin with the creation of electoral laws that regulate free and fair legislative elections, the first set of which are currently slated for 25 November.

The main challenges for the reform process are slow economic growth, soaring poverty and corruption in many sectors, contrasted with the urgent need for jobs, better education and adequate healthcare. But so far the ministries of finance, employment, health, education and communication have been slow to respond. 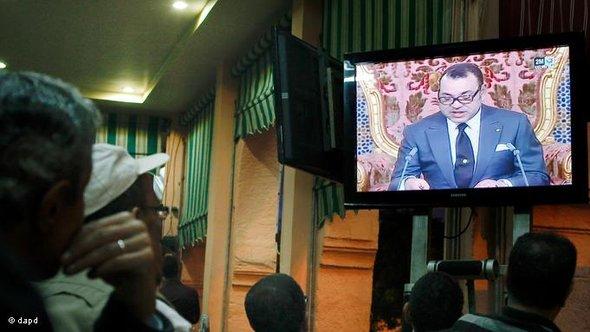 Sea change or mere symbolism? – Moroccans watch a live broadcast from Rabat of a speech by Morocco's King Mohammed VI at a cafe in Casablanca, 17 June 2011. Morocco's king presented new constitutional amendments that could transform the North African nation into a constitutional monarchy with a more powerful elected government

For the protesters these reforms are insufficient because the King would retain significant executive powers, such as the authority to select the prime minister from the party that wins the most seats in parliament. He would still lead the army and appoint the government ministers and ambassadors, as well as preside over the cabinet when issues of security or strategic policies are at stake. He would also continue to have the power to dissolve parliament and maintain his position as "Commander of the Faithful", the kingdom's Islamic spiritual leader.

Those unsatisfied with the proposed reforms include the 20 February protest movement, which boycotted the vote and are calling for the boycott of the upcoming 25 November elections. They claim that the constitutional review won't help the Berbers' political marginalisation in what they believe is an Arab-dominated government and that the official recognition of this language is merely a symbolic gesture. And the opposition believes that the changes will not transform Morocco into a European-style constitutional monarchy, which is their ultimate goal.

Morocco's various political parties, civil society organisations and media believe that the new constitution will have far-reaching results, but will take much work to ensure constitutional changes be implemented effectively and widely. They have faith that the King will embrace this challenge in consonance with the February 20 movement's call for the rule of law, the values of citizenship, freedom, social justice and democracy.

Moha Ennaji is an author, international consultant, Professor of Cultural and Gender Studies at Sidi Mohamed Ben Abdellah University and President of the International Institute for Languages and Cultures in Fez, Morocco.

Home
Print
Newsletter
More on this topic
The Moroccan Regime Is Corrupt and Incapable of ReformSuperficial Respect for the Will of the People
Related Topics
All Topics
Date:
Mail:
Send via mail

END_OF_DOCUMENT_TOKEN_TO_BE_REPLACED
Social media
and networks
Subscribe to our
newsletter