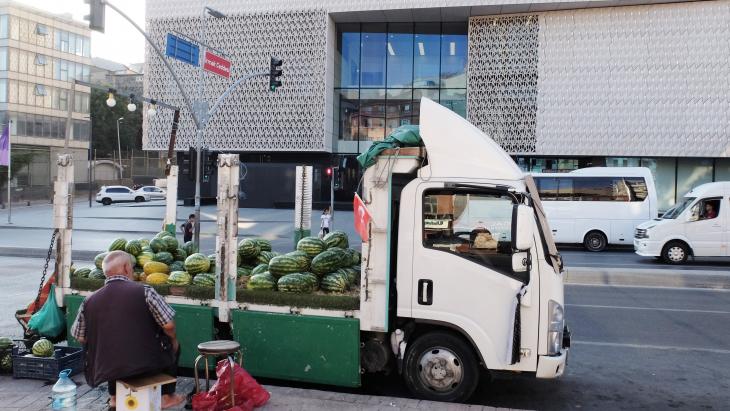 The Arter, art and gentrification

A new modern art museum recently opened its doors at the heart of Istanbul's working-class Dolapdere neighbourhood. An opportunity for this culturally diverse quarter or a threat in an area recognised as a social flashpoint? Ulrich von Schwerin reports on the relationship between art, commerce and gentrification on the Bosphorus

Anyone walking along the steep roads from Taksim Square down into the Dolapdere Valley will pass textile workshops, carpenters' shops and laundries. Washing has been hung out to dry between the houses, children play on the streets while old ladies sit outside their front doors. Kurdish slogans have been sprayed on the walls, leftist posters call on people to join the class war and in the corners, the rubbish is piling up. Then suddenly, in amongst all the scruffy houses, a light, stone cube appears, its large glass windows glinting in the sun.

The contrast between the new Arter Museum and the surrounding neighbourhoods of Dolapdere and Tarlabasi could not be more stark. Barely 10 minutes from Taksim Square and Istiklal Street, Istanbul's showcase shopping mile, both districts are a cultural melting pot and social flashpoint. This is home to students and rubbish collectors, artists and sex workers, Kurdish refugees, African migrants and Roma.

And now in the midst of it all stands the new art museum of the Vehbi Koc Foundation, one of the biggest cultural sponsors in Turkey. Built by London-based Grimshaw Architects, who were also responsible for designing Istanbul's new airport, it's an imposing and elegant structure. The facade of the cube consists of perforated, geometric elements that change colour according to the light and cast filigree shadow patterns on the floors of the rooms inside.

"The neighbourhood loves us" 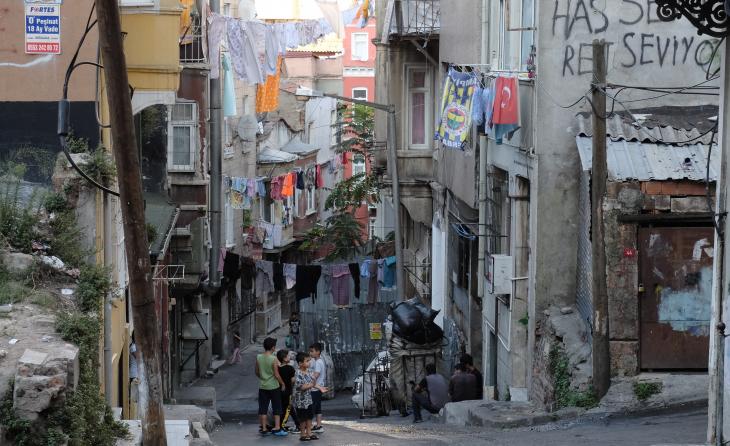 The contrast between the new Arter Museum and the surrounding neighbourhoods of Dolapdere and Tarlabasi could not be more stark. Barely 10 minutes from Taksim Square and Istiklal Street, Istanbul's showcase shopping mile, both districts are a cultural melting pot and social flashpoint. This is home to students and rubbish collectors, artists and sex workers, Kurdish refugees, African migrants and Roma

"The new building is very transparent and inviting," said founding director Melih Fereli at the opening of the museum. "We will re-kindle interest in contemporary art and make it accessible." Before construction work began, the views of local people were sought on several occasions and now a variety of programmes for local children are in the planning. Entrance is free for residents of the area. "The neighbourhood has embraced us and loves us," Fereli offers his assurances.

With six galleries of varying heights and dimensions, the recently-opened museum has the space to house several temporary exhibitions, while in the auditorium and the Blackbox in the basement, there's room for concerts, dance performances and film screenings. There's also an attractive cafe and bookshop on the ground floor. The new Arter Museum is undoubtedly an asset to Istanbul's cultural life – but nevertheless a certain unease remains.

The Istanbul-based economic historian Orhan Esen, a specialist in the history of the area, believes that the new museum represents both an opportunity for and a threat to Dolapdere. Dolapdere is "not simply any old poor neighbourhood," he says, but rather it has "an extremely high intellectual capital" with many artists and art students living there. "While it may close the door on some, for others the future is only just beginning. That's how it is with any process of gentrification," says Esen.

Link between art and gentrification

Since the opening of the Guggenheim Museum in northern Spain, the 'Bilbao effect' has referred to the stimulating effect of cultural institutions on urban development. New museums can change the image of a city, enliven the art scene and attract new visitors. But they can also push property prices up and result in the displacement of weaker social groups. In Istanbul in particular, art and gentrification often appear to go hand in hand.

Just as the Arter opened, the new museum of the Mimar Sinan Fine Arts University was inaugurated at the old port of Galata during this year's Istanbul Biennale. Close by, work is underway on the new Istanbul Modern designed by Renzo Piano. This gallery brought modern art to the Bosphorus in the 1990s. Both galleries are part of the Galata Port Project, aimed at boosting tourism with a cruise ship terminal and luxury hotels.

In addition, the Pelivneli Gallery was opened in a former liqueur factory early this year in the financial district of Maslak. Once surrounded by orchards, the white 1930s building stands today in the shadow of a gleaming high-rise complex. The juxtaposition of the old factory building and the ultramodern glass and steel giant is as fascinating as it is exciting, but also spotlights the close links between art, commerce and capitalism. 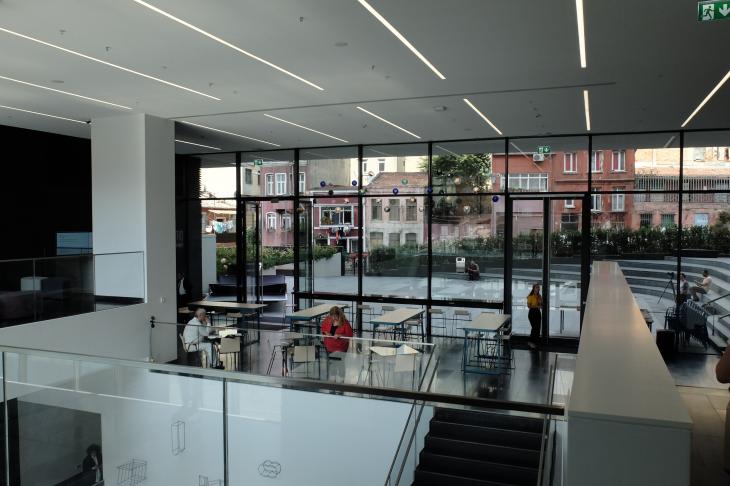 Art and gentrification inextricably linked: new museums, like the Arter, may change the image of a city, enliven the art scene and attract new visitors. But they can also push property prices up and result in the displacement of weaker social groups. As the historian Esen explains, "space for the socially disadvantaged is destined to become increasingly rare"

It's hardly coincidental, after all almost all major art museums in Turkey are financed by private foundations. Koc, Sabanci, Garanti, Eczacibasi – all long-established companies active in the nation's cultural life. Many of their exhibitions, concerts and festivals are first-class, but the corporate sponsorship is controversial. In particular, Koc's involvement in the Biennale comes in for regular criticism due to the foundation's involvement in the arms sector.

The Koc Foundation wants the site of the new Arter in Dolapdere und Tarlabasi to be perceived as an opportunity for cultural exchange and social engagement. Jamie Pearson of Grimshaw Architects says the stark contrast between the stone and glass cube and its surroundings is intentional. "Putting this thing here was like throwing a pebble into the neighbourhood and watching how the waves change this place," says the architect.

Founding director Fereli is aware that the new museum is pushing up rents and property prices in the neighbourhood. But local people were happy about the development, he says. Previously, people moved away as soon as they could afford to, but now they say they want to stay, says Fereli. Now steps must be taken to prevent "unscrupulous property developers" from coming and building high-rise blocks in the area, he adds.

Tarlabasi's experience of gentrification has been particularly painful. Since 2006, the AKP government of Recep Tayyip Erdogan has pushed through a controversial urban development project against large-scale resistance. This has involved tearing down hundreds of old houses to be built anew as offices and apartments for the middle classes. Today, all that's left of the historic district are a few churches and old facades.

Few other Istanbul neighbourhoods have attracted so much attention from the media, scholarship and the art world, says the historian Esen. With its explosive social and cultural mix, the district is "poor but sexy," he says. He believes the big art institutions will now try to "exploit" the history of the neighbourhood. "Space for the socially disadvantaged is destined to become increasingly rare," says Esen. In the end, however, the picture is unlikely to be truly black or white.

Having taken control of the traditional media, Turkish President Erdogan is now extending his reach to the social networks. A new law has been passed to rein in major digital ... END_OF_DOCUMENT_TOKEN_TO_BE_REPLACED

Although a unity government was formed in Libya in March 2021, tensions and possible crises between the political actors are already emerging. What problems does the country face ... END_OF_DOCUMENT_TOKEN_TO_BE_REPLACED

In Islamic mysticism, Ramadan is more than just a period of prescribed abstinence, signifying an opportunity for inner contemplation. Marian Brehmer explores the spiritual ... END_OF_DOCUMENT_TOKEN_TO_BE_REPLACED

The USA and NATO plan to withdraw from Afghanistan by September. The operation is risky, the outcome uncertain. Many Afghans fear civil war. The quake on the Hindu Kush will also ... END_OF_DOCUMENT_TOKEN_TO_BE_REPLACED

The neo-Ottomanism propagated by Erdogan has long been more than rhetoric and symbolic politics. This can be seen from recent developments in parts of northern Syria, where Turkey ... END_OF_DOCUMENT_TOKEN_TO_BE_REPLACED

Televised Turkish dramas are all the rage in the Middle East. A young Ottoman TV Empire has been expanding its soft power by harnessing regional dialects, Arabic names and viewers ... END_OF_DOCUMENT_TOKEN_TO_BE_REPLACED
Author:
Ulrich von Schwerin
Date:
Mail:
Send via mail

END_OF_DOCUMENT_TOKEN_TO_BE_REPLACED
Social media
and networks
Subscribe to our
newsletter