Skip to main content
The Babri Mosque Controversy in India

Sacred Ground for Muslims and Hindus

For centuries, Hindus have claimed that the site of the Babri Mosque is the birthplace of their god Ram. Now a court has decreed that the site can be used by both Hindus and Muslims. Moreover, as Qurratulain Zaman reports, the majority of Indians seem to be tired of religious conflict

Demonstrating for peace after decades of confrontation: Hindus and Muslims have fought over the site on which the Babri Mosque stands for about 60 years

​​The Babri Mosque dispute has political, social, historical and religious overtones. It centres on a plot of land in the city of Ayodhya, Faizabad District, where in 1527, the first Mughal emperor of India, Zaheer ud-Din Muhammad Babur, gave orders to build a mosque. The Hindu organisation Friends of Ram went to court, claiming that the site on which the Babri Mosque was built is the birthplace of their god Ram.

Over the decades, both Muslims and Hindus have claimed ownership of the site; claims that have often led to Hindu–Muslim violence. The first case relating to the site was filed in 1885 by a Hindu priest, who wished to erect a temple on the site. The British judicial commissioner of Awadh at the time dismissed the case.

According to the Imperial Gazetteer of India 1908, Muslims prayed in the inner portions of the mosque while Hindus prayed in the outer portion. This status quo was maintained until midnight of 22 December 1949, when statues of Ram were placed inside the mosque, or – as some Hindu groups would have it – "emerged from the ground".

Ram is one of the many popular deities in Hinduism. He is the mythological King of Ayodhya in ancient Indian scriptures and the main hero of one of the two great Hindu epics Ramayan.

The Babri Mosque as it was before the riots: in 1528, the first Mughal emperor of India, Zaheer ud-Din Muhammad Babur, gave orders for a mosque to be built on this site on the foundations of a Hindu temple

​​"I am not satisfied with the court decision," says Triloki Nath Pandey, speaking on behalf of the Hindu group Ram Lala Virajman, one of the three litigants in the 60-year-old Ayodhya dispute, at the Allahabad High Court. Pandey claims that the temple site and all the land around the temple is the property of Ram: "The judges have divided the holy land in three parts, and by doing this they have divided our God Ram. We will go to the Supreme Court to get the full share of the land."

Pandey is also an active member of Vishwa Hindu Parishad, or VHP. VHP is the sister organisation of the Bharatya Janata Party (BJP). VHP is widely seen as the main force behind the destruction of the Babri Mosque in 1992, which led to Hindu–Muslim riots that ultimately claimed about 2,000 lives.

On 30 September 2010, after ten decades of court wrangling, the Allahabad High Court delivered its verdict. The three-member bench accepted that the land is a birthplace of Ram and divided the 2.6-acre site among the three petitioners – the Friends of Ram, Nirmohi Akhara (both Hindu organisations) and the Muslim Sunni Waqf board, a legal body responsible for taking care of property constructed by Muslim rulers in India.

Nirmohi Akhara is a Hindu sect of Sadhu mystics who have renounced the material world for the company of God. 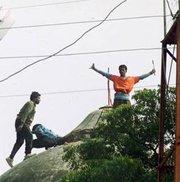 In 1992, thousands of Hindus stormed the Babri Mosque and demolished it; today, a new Hindu temple stands on the site

​​81-year-old Bhaskar Das is the head of Nirmohi Akhara. "Since 1855, the site has been used as a Hindu temple," he claims. "Even in 1992 it was used as a Hindu temple. The dispute is not yet resolved. It is not acceptable to us that the High Court has given one-third of the land to the Muslims." He goes on to say that the group is holding talks with the Muslims in an attempt to reach an out-of-court settlement. "But we are also preparing ourselves to go to the Supreme Court."

For his part, 90-year-old Mohammad Hashim Ansari is happy with the court's ruling. He has been pursuing the case for the last 60 years on behalf of the Muslims. Although tired of the long-drawn court proceedings, he says that if the three parties decide to go to the Supreme Court, he has no choice but to go with them.

The beauty of compromise

Shanti Bhushan – a former Union Law Minister and, according to the Indian Express, one of the most powerful men in India – sees the court ruling as a political compromise. "This is the best compromise for all parties to the dispute. This judgement is an excellent indication of how things should be," he said.

Most Indians are relieved at the verdict. Naushad Ali is an Indian journalist. "This dispute divided people for a long time. It created unnecessary tension for the common people. The people who don't want to solve this issue are self-declared individual religious leaders. I don't think they have a big following. The common man doesn't care about it anymore," he says. 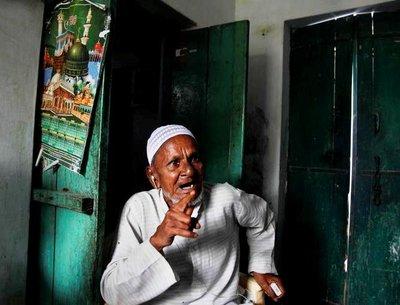 Tired of the endless court cases: Mohammad Hashim Ansari represented the Muslims in this case for 60 years

​​Naushad Ali feels that politics in India is changing because of the economic boom. People want to lead decent lives and don't want to have them spoiled by religious riots.

This court case symbolises the constant struggle between India's new and old politics. On the one hand, the elements of yesterday still exist and are trying to keep the dispute alive; on the other, this judgement seeks to overcome the religion-based politics of the 1980s and 1990s and to accommodate all parties.

The verdict is an expression of the belief that a religiously contested site can actually be shared by different religious groups. For the sake of India, "the world's greatest democracy", one should hope that it will.

Qantara.deThe Kashmir ConflictA Clash of Nationalisms and ReligionsViolence in Muslim-dominated Kashmir and anti-India protests has recently been flaring up again. Yoginder Sikand visited the region and came to the conclusion that the decades-old conflict is based on two factors: claims of nationalism and of religion Asghar Ali EngineerEconomic Justice as a Religious MissionThe end of November is the anniversary of the terrorist attack in Mumbai in which 173 people were killed. Muslims from Mumbai condemned the terrorist act – among them supporters of Islamist reform theologian Asghar Ali Engineer. Gerhard Klas reports The 19th Century Urdu Epic "Hoshruba"A Literary Treasure from Hindu-Muslim Culture"Hoshruba" is a fantasy epic written in 19th century Muslim India. Now Muhammad Ali Farooqi has produced the first ever translation of "Hoshruba" into any language. In this interview with Lewis Gropp he talks about this unique epic, Urdu literature, and the colonially induced Urdu-Hindi divide

END_OF_DOCUMENT_TOKEN_TO_BE_REPLACED
Social media
and networks
Subscribe to our
newsletter