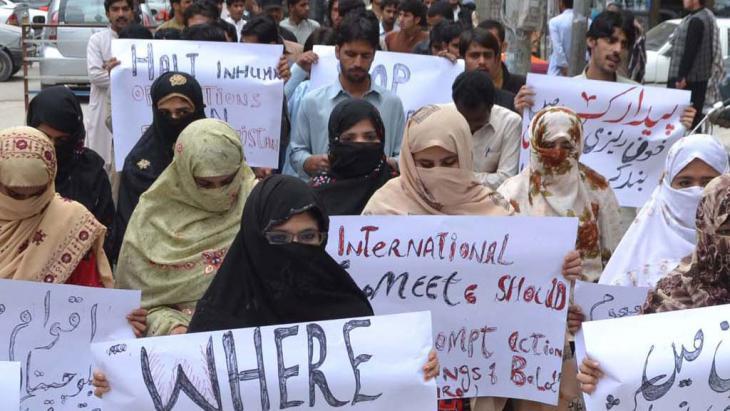 Ever since colonial borders were drawn in Central Asia over 120 years ago, the Baloch people in both Iran and Pakistan have faced oppression and struggle – largely unnoticed by the international community. By Emran Feroz

The murder of the Pakistani human rights activist Sabeen Mehmud in central Karachi earlier this year triggered a huge media echo. Mehmud was famous the world over for her work, primarily in the fields of women's rights and Internet activism. Despite the intense media coverage, not much attention was paid to the fact that during the final months of her life, the activist had focused specifically on the conflict in the south-western Pakistani province of Balochistan. Just a few hours before her murder, Mahmud and her organisation "The Second Floor" had arranged a debate on the human rights situation in Balochistan.

The province has been a flashpoint for decades. The Balochistan conflict has de facto been going on since the creation of the state of Pakistan. This was when colonial borders, which had been previously drawn in a violent and arbitrary manner, separating entire population groups from each other, were finally consolidated.

What is known as the Durand Line, named after Mortimer Durand, a British diplomat, played a key role in this. The British drew this fatal border in 1893 in order to separate their colonial territory from the dominion of the Afghan Emir at the time, Abdur Rahman Khan. Because the emir had ascended to power with the help of the British – he ousted his cousin in Kabul – he was only too willing to sign the border agreement in return.

The ongoing border issue not only applies to Pashtun areas, but also those inhabited by the Baloch people. Although the Durand Line Agreement was only valid for 100 years and ceased to become binding in 1993, the Pakistani government is not interested in reopening the issue. The reason it gives is that Pakistan did not actually exist at the time the agreement was signed and that the agreement itself is, therefore, invalid. Nevertheless, the borders drawn at the time are being guarded all the more stringently. 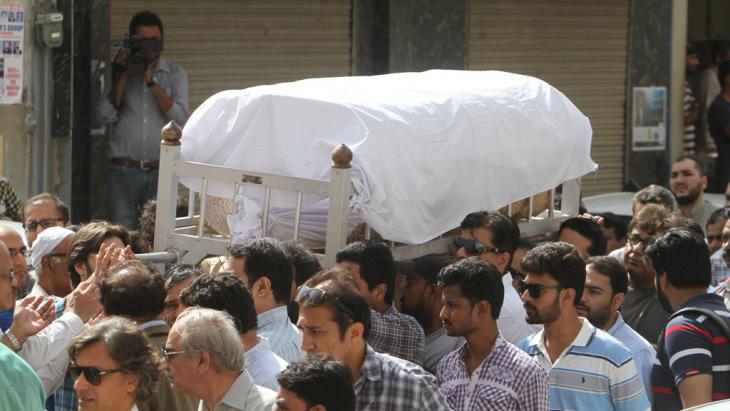 Activists in the line of fire: the well-known women's rights and human rights activist Sabeen Mehmud was murdered in Karachi in April 2015. Shortly before being killed, she had organised a discussion event on the disappearance of people in Balochistan. Some human rights activists accuse the Pakistani security forces of being responsible for the disappearance of many in the region

Balochistan has been the scene of several major rebellions in recent decades, all of which were brutally put down by the government in Islamabad. Although the region has a wealth of natural resources, the people are among the poorest in Pakistan. They barely have access to stable infrastructure, power or clean drinking water. Some 88 per cent of Balochs live below the poverty line. Although natural resources are being exploited, the authorities are failing to make adequate investments in other sectors. Only the security sector is flourishing.

Military garrisons have been springing up like mushrooms in the region in recent years, as have police stations – there was an increase of 62 per cent in the province in the year 2009 alone. Apart from this, paramilitary groups acting in the interests of Islamabad and hunting down Baloch activists and politicians operate here. A total of 21,000 people are reportedly missing.

The corpses of some of these missing people are regularly found, usually bearing the signs of horrific torture. Although Islamabad has condemned the murder of Sabeen Mehmud and announced an investigation, observers presume that her murder was also carried out by groups with links to the government or Pakistani intelligence service – or in short, the establishment.

This climate of fear and perpetual repression has created a vacuum for militant groups. Now an increasing number of young Balochs are taking up arms. In their eyes, peaceful and democratic means have failed. Over the past few years, separatist groups such as the "Balochistan Liberation Army" (BLA) and the "Baloch Liberation Front" (BLF) have attracted attention by carrying out bombings and a series of brutal attacks. Many civilians were killed in the process.

In contrast to other militant groups in Pakistan, for example the Pakistani Taliban (TTP), the BLF, BLA and other Baloch groups are not religious, but rooted in nationalist, secular, and sometimes also Marxist, ideology. This could also be the reason why they fail to make the headlines in Western media. 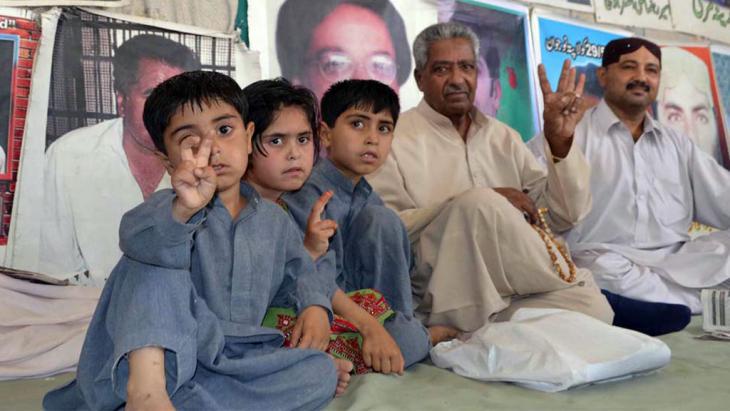 Some 21,000 people (among them politicians and activists) are missing in the region of Balochistan, Pakistan. The corpses of some of them have turned up, marked with the signs of torture. Pictured here: a family protests against the Pakistani government and the disappearance of so many of their community

Regional players, for whom Pakistan is a thorn in the side, have for a long time been trying to influence the crisis and benefit from it. In the 1980s, for example, the Balochs received support from the USSR as a result of US–Pakistani co-operation during the Soviet occupation of Afghanistan. These days, one of the biggest sponsors of Baloch independence is India, Pakistan's eternal arch enemy. The Pakistani secret service, ISI (Inter-Services Intelligence), has for a long time been accusing the Indian government of actively supporting militant Baloch groups and training them in camps.

The ISI levels the same accusation at Afghanistan. First and foremost ex-President Hamid Karzai is said to have been sympathetic to the Baloch cause. Apart from that, it is no secret that Baloch leaders have regularly found refuge in Kabul in recent decades. The historic support from Afghanistan – which refuses to recognise the Durand Line to this day, and which still regards Balochistan as illegally occupied territory – certainly plays a major role in this regard. Apart from that, both India and Afghanistan hold Pakistan responsible for most of the nation's grievances – terrorism in particular – and have a keen interest in destabilisation.

China is another significant player in Balochistan. The Chinese government is especially interested in the province's natural resources – gold and copper for example – and has secured numerous exploitation rights. Furthermore, the port city of Gwadar on the Arabian Sea has enormous strategic significance and is likely to play an important role in supplying energy to China in the future. Beijing has invested some 200 million dollars in the construction of the port alone.

Billions of dollars in further investment have already been agreed. The construction of a Chinese naval base is also reported to be at the planning stage. There is now talk among Baloch politicians and activists of a "Chinese colonisation", which is set to benefit the Pakistani establishment, not the bitterly poor province itself. Chinese companies in Balochistan have come under attack as a result of this increasing influence.

But the Baloch struggle for independence is not restricted to Pakistan alone. In Iran, home to some 1.5 million Balochs, a similar situation prevails. In the Baloch province there (Sistan and Balochistan) militant groups have also rallied to fight the government in Tehran. The conflict in Iran is compounded by the fact that it has a sectarian dimension. This is because the Baloch people are not only regarded as an ethnic minority, but also as part of the Sunni minority that has to submit to Shia domination. 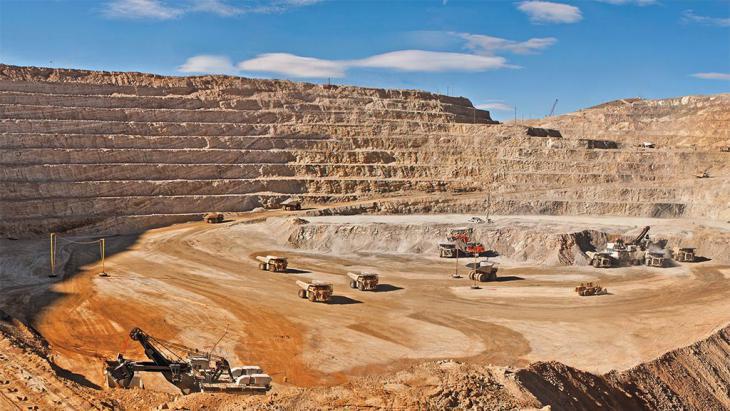 The race for Balochistan's rich resources: the decades-long conflict in the province of Belochistan is also about the region's natural resources. According to Emron Feroz, although China is investing in development of the region's infrastructure, it is also securing itself the exploitation rights to raw materials. Observers say that it is the Pakistani elite that will benefit from all this, not Balochistan itself, one of the poorest regions of the country

Support from the CIA and Mossad

The conflict is also being exploited geopolitically in Iran. Here, however, very different players are involved. For example, a while ago it became known that "Jundallah" – a militant Salafist group claiming to represent all Sunnis in Iran and which operates mainly out of Iranian Balochistan – was not only receiving support from Saudi Arabia, but also from the Israeli foreign intelligence service Mossad and the CIA. At the same time, the group is cited by the US as a terror organisation with links to al-Qaida.

This revelation caused a furore a few months ago. But this was primarily because a number of journalists confused "Jundallah" with a Pakistani group of the same name that had allegedly sworn allegiance to IS.

Here too, Pakistan's role makes it clear how paradoxical geopolitics can be. Whereas during the era of the Shah regime, Pakistan and Iran joined forces against their Baloch populations, in recent months accusations have grown louder to the effect that Pakistan is to some extent supporting "Jundallah" in order to generate problems for Tehran. And while all of this goes on, people in Balochistan and elsewhere continue to disappear – or are killed in broad daylight like Sabeen Mehmud.

Home
Print
Newsletter
More on this topic
Minorities in the Islamic Republic: Fear of separatistsIslam in Pakistan: The myth of the Muslim monolithInterview with Daniyal Mueenuddin: "Pakistan's instability is the world's instability"
Related Topics
Al-Qaida, Hamid Karsai, Islam and the West, Minorities in the Muslim world, Muslim minorities, Sunni Muslims | Sunni Islam, U.S. policy in the Middle East
All Topics

Each year, thousands of people travel to the Turkish city of Konya to attend a week-long series of events and ceremonies that mark the death of the 13th-century Islamic poet, ... END_OF_DOCUMENT_TOKEN_TO_BE_REPLACED

As the Western world emerges from a holiday season made less festive by COVID-19, millions of children in Afghanistan are starting 2022 facing the prospect of famine, illness, and ... END_OF_DOCUMENT_TOKEN_TO_BE_REPLACED

Their exhausting escape from the Taliban took them from Kabul to Qatar, though European cities and U.S. military bases. But now this Afghan family has finally arrived in a small ... END_OF_DOCUMENT_TOKEN_TO_BE_REPLACED

The Pakistani Taliban, known by the acronym TTP, are regrouping and reorganising, with their leadership headquartered in neighbouring Afghanistan, according to a U.N. report from ... END_OF_DOCUMENT_TOKEN_TO_BE_REPLACED

Restrictions imposed by the Taliban after their takeover mostly targeted urban women. Now, the expanded rules could affect all women in Afghanistan. By Monir Ghaedi END_OF_DOCUMENT_TOKEN_TO_BE_REPLACED

Every year in December, the team at Qantara.de takes a look back at the articles that proved most popular with our readers. This year is no different. Here is a run-down of the ... END_OF_DOCUMENT_TOKEN_TO_BE_REPLACED
Author:
Emran Feroz
Date:
Mail:
Send via mail

END_OF_DOCUMENT_TOKEN_TO_BE_REPLACED
Social media
and networks
Subscribe to our
newsletter