If you want to know where the next demonstration will be held for the Egyptian civil rights movement, you need only log onto one of the many local political blogs. Web diaries in Egypt have become a firmly established part of the civil rights movement along the Nile. Mona Naggar reports 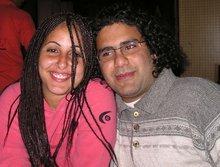 At the manalaa.net site, Alaa and his wife Manal keep a blog in two languages

​​At the site journal.gharbeia.net, Amr Gharbeia takes stock of developments in the Egyptian blogosphere over the past twelve months. "A year ago we were commenting on the news, now we ourselves are at the center of the news," writes the young Egyptian.

Since the arrest in early May of some bloggers at a solidarity demonstration for two Egyptian judges who accused the Egyptian government of fraud in the last parliamentary election, the Arabic and international media are now paying more attention to the political web diaries.

Political commentary with a humorous edge

The most well-known blogger in Egypt today is Alaa Saif. With his wife Manal Hassan, he runs the site manalaa.net in both English and Egyptian dialect. You can read a personal account of Alaa's experiences in prison, or a detailed description of various recent demonstrations organized by the Egyptian civil rights movement written from the perspective of participants, or Manal's research on the Muslim-Coptic unrest, or you can just meet Alaa's cat.

Alaa is 24 years old and spent most of his time before his arrest at the computer. The manalaa.net site has been around since March, 2004. The secret behind the popular success of Manal and Alaa’s blog is its humorous style and the couple's courage in sharing their personal life, also their love life, with the public.

At first Alaa's idea was just to experiment with web technology and create a platform for like-minded people: "My wife and I both work for an Egyptian organization that implements free web technology in development aid work. Then we discovered other Egyptian bloggers, started networking, and that motivated us to start writing regularly." 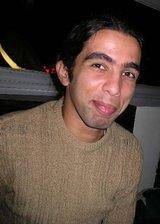 "A year ago we were commenting on the news, now we ourselves are at the center of the news," writes blogger Amr Gharbeia

​​According to the Egyptian Blog Ring, there are currently over 900 web diaries in Egypt, 53 percent of them in Arabic. Together with Lebanon, this country along the Nile is a leader in the Arabic internet world. Although the majority of blogs do not have political content, the boom in the Egyptian blogger scene would be unimaginable without the civil rights movement of the past two years.

Various groups in Egyptian civil society of diverse political leanings were involved in the fight against extending the presidency of Husni Mubarak and for fair parliamentary elections.

Alaa, on the other hand, takes the self-assertive stance that the immense popularity of the Egyptian civil rights movement would be unthinkable without the bloggers. They offer a communication platform for opposition parties and the various groups active in the civil rights movement.

Meetings for election campaigns or other activities are organized via the internet, and volunteers are recruited for election monitoring. Even Arabic satellite channels have used the blogs as sources for information.

Political involvement via the internet

The most recent example is the disturbing story of the activist Muhammad Scharqawi from the civil rights movement Kifaya. His experiences during his arrest on May 25 can be read in several Egyptian blogs. The activist describes in great detail the humiliation and torture inflicted upon him by Egyptian security officers. Many Egyptian media outlets have now also published his blog account.

Shayfeen.com (which translates as "we see you") is another example of political activism on the internet. This site calls upon all Egyptians who have witnessed human rights abuses to send their accounts or photographs to shayfeen.com, where they are published online.

The site also calls on Egyptians to show solidarity with the judges who have accused the government of falsifying the last election results. Their position is that no one should be lead to believe that their vote doesn’t count or that their political engagement is inconsequential.

The incredible developments in the Egyptian blogosphere cannot, however, distract from the fact that it is primarily intellectuals and students who use them. Jamal Id from the Arabic Network for Human Rights Information in Cairo is convinced that the number of bloggers would still keep climbing if the instruments used to create blogs were accessible in Arabic.

Another big problem is the high rate of illiteracy. Around 40 percent of Egyptians cannot read or write and are thus excluded from the internet. And most Egyptians remain attached to the most important source of information in the country: satellite television.

The situation in Egypt and other Arabic countries can be compared with Iran, where blogs have long escaped state control despite limited freedom of the press and harsh governments reprisals. Young Egyptian bloggers all agree that Iranian society is more active, the youth more involved, and the political system under the Mullahs more democratic than in their own country.

Online Media Censorship in Egypt
Internet Police on the Nile
Although the Egyptian government initially promoted the spread of Internet use, the new media has today become a thorn in the side of many state authorities. Censorship and the banning of websites are no longer a rarity, as Nelly Youssef reports from Cairo

END_OF_DOCUMENT_TOKEN_TO_BE_REPLACED
Social media
and networks
Subscribe to our
newsletter