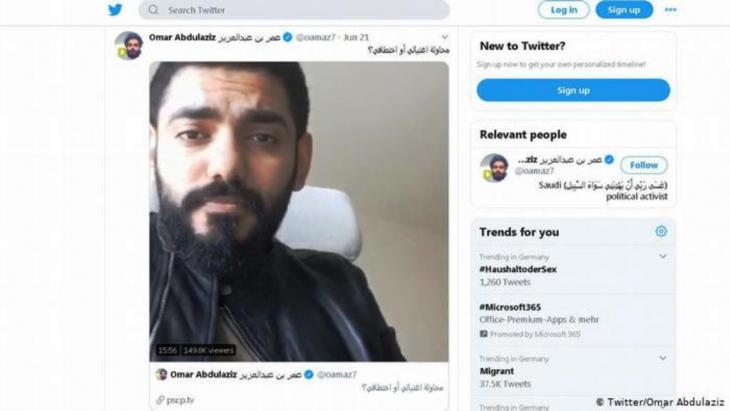 A friend of the murdered journalist Jamal Khashoggi, Omar Abdulaziz is a thorn in the side of Saudi Arabia. Living in exile in Canada, the activist has been warned by the police of a possible threat against him. By Diana Hodali

Omar Abdulaziz knows that Saudi dissidents are not tolerated by Crown Prince Mohammed bin Salman (MbS). That is why 29-year-old Abdulaziz has been living in exile in Canada for years. Now, he says, he has received a call from the Royal Canadian Mounted Police (RCMP) notifying him that there has been a credible threat against him originating from Saudi Arabia.

"The Canadian authorities have received information that I could be a potential target," Abdulaziz told The Guardian newspaper and in a video statement he posted on Twitter.

"Mohammed bin Salman and his people want to harm me. They want to do something against me, but I don't know if it is an assassination or a kidnapping. I don't know, but it's something that's definitely not right," he said in the video that so far has almost 160,000 views on Twitter.

Omar Abdulaziz was granted political asylum in Canada several years ago. This is a good thing, said Guido Steinberg, Saudi Arabia expert at the German Institute for International and Security Affairs (SWP) in Berlin.

"He is so prominent because all opposition, liberal and liberal-Islamic voices in Saudi Arabia have fallen silent. Either they are in prison or they have been forced by other means to cease their activities," said Steinberg. Abdulaziz is considered an opposition and liberal voice, Steinberg added, "without having a clear political profile."

This was the first time that the Canadian police had contacted him directly, said Abdulaziz. His lawyer, Alaa Mahajna, told the Guardian that the warning was quite credible and concrete. Abdulaziz's previous contacts with the Canadian authorities have mostly been about general risks.

Iyad El-Baghdadi, head of the Kawaakibi Foundation and a democracy activist, had expected that Abdulaziz would face such serious threats. "We know that MbS has been targeting him for some time," he said.

El-Baghdadi, a critic of the Saudi policy of Crown Prince MbS living in Norway, was also warned in 2019 of a possible threat coming from Saudi Arabia. Although he and Omar Abdulaziz have never met in person, the two activists are united by their criticism of the crown prince's actions. They were also both friends of the Saudi journalist Jamal Khashoggi who was brutally murdered at the Saudi consulate in Istanbul in 2018.

You may also like: Press freedom under attack – The Arab world's new wave of media repression

In 2017/2018, Abdulaziz had regular contact with Khashoggi, then a Washington Post columnist. For Steinberg, this could have been Abdulaziz's undoing.

"When Jamal Khashoggi was in Washington D.C., he sought contact with Omar Abdulaziz. They had also planned joint activities," he said. "That seems to have been a moment when Khashoggi was in the line of fire, but also when Saudi Arabia realised that Abdulaziz might be a danger to them." 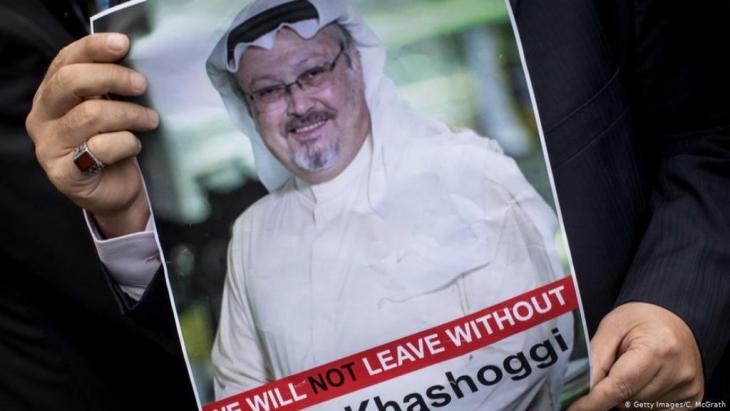 In 2018, Abdulaziz learned through researchers at the Citizen Lab of the University of Toronto that his phone contained spyware that was apparently hacked and tapped through a network connected to Saudi Arabia. Several of his family members were arrested after the suspected hack. In his recent video statement on Twitter, Abdulaziz stated that "they want to hurt me as a critic, ok. But what does my family have to do with it? Why are my parents and siblings not allowed to travel, not allowed to contact me anymore?"

Iranian-Canadian author Ava Farmehri’s debut novel paints a bleak picture of growing up in Iran after the Islamic Revolution. The book is both a prison novel and a reflection on ... END_OF_DOCUMENT_TOKEN_TO_BE_REPLACED

Last week Egypt's police stepped up an "unprecedented escalation" on activists by arresting a leading rights group director. Advocates on the Nile have long weathered a crackdown ... END_OF_DOCUMENT_TOKEN_TO_BE_REPLACED

In France and in Canada's Francophone province of Quebec issues of personal freedom have recently been thrown into sharp relief. In Quebec, legal proceedings have been initiated ... END_OF_DOCUMENT_TOKEN_TO_BE_REPLACED

In 2017, Sarah Hegazy was arrested in Cairo for displaying a rainbow flag, the symbol for homosexuality and queerness, at a concert. The activist recently took her own life in ... END_OF_DOCUMENT_TOKEN_TO_BE_REPLACED

In June Canada's French-speaking province Quebec passed Bill 21, banning the wearing of religious symbols or garments by certain public servants in the workplace. Aside from the ... END_OF_DOCUMENT_TOKEN_TO_BE_REPLACED

END_OF_DOCUMENT_TOKEN_TO_BE_REPLACED
Social media
and networks
Subscribe to our
newsletter