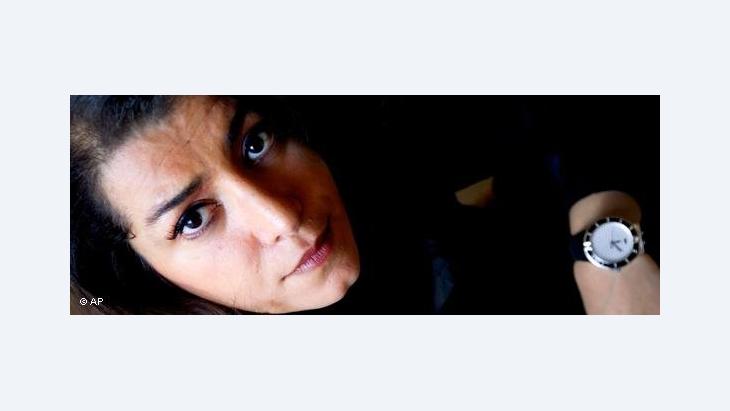 The Comic World of Marjane Satrapi

Yearnings for a Lost Homeland

﻿Published 11 years ago, Marjane Satrapi's comic "Persepolis" on her youth in Iran caused a sensation. Millions of people loved the eponymous film based on the comic book. Satrapi has been busy making other films since, and talks to Kathrin Erdmann about homesickness and freedom

Her heart-shaped mouth is slathered in bright red lipstick, her eyebrows have been drawn upwards into a theatrical arch. "And my black hair is dyed," says Marjane Satrapi with a laugh. "Imagine that: grey hair with this face. Then I really would look like the devil." The 41-year-old comic illustrator grimaces and laughs again heartily.

"I enjoy life," she says. "I wake up every morning with a big smile on my face, and it takes a lot to make me unhappy." And presumably Satrapi also looks happy because she's holding a cigarette. Smoking is good for her, anyone can see that, she says with a wink.

"I think smoke conserves. You know that meat is smoked to conserve it. It's probably why I haven't got any wrinkles yet." Although Iranian-born Satrapi has enjoyed considerable success over the years, there is nothing arrogant about her, and she's able to poke fun at herself. She's come to Hamburg to present her new film "Chicken with Plums", set in 1950s Tehran.

Although the era predates Satrapi, she says she feels greatly inspired by it because it was a time when the nation experienced something akin to democracy, a time when Prime Minister Mossadegh nationalised oil revenues. But then the Americans and British hounded the popular politician out of the country, putting an end to any new sense of optimism. 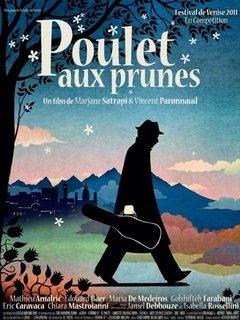 A story about a time of national optimism: French-language poster of "Chicken with Plumbs"

​​"Iranians lost something when that happened," says Satrapi. The film deals partly with this sense of loss, and partly with the frustrated love of a violinist for a woman named Irane. This is Satrapi's way of accentuating her own yearnings for her lost homeland.

Her parents sent her to Austria during the Iran-Iraq war, and she later went to France, where she's lived permanently since 1994: "It's like taking a plant out of the earth and putting it in a vase. No matter how well you tend the flower, it is accustomed to the earth of its homeland."

Recollections of Tehran are those of her youth: the 5,000-6,000 metre mountains, the snow-covered peaks, the pollution, particular sounds, and food: "It took my stomach three years to be able to properly digest French food," says Satrapi.

Following the huge success of the comic "Persepolis" in the year 2000 and its film adaptation in 2007, the illustrator, director and screenwriter has been in demand as never before.

Although she took up French citizenship a long time ago, she doesn't feel she belongs to French society, and this is not something she wants: "I've never had a sense of being part of any society. I'm here, I've got my friends around me, and that's my life. I'm living as though under a bell jar."

This is the life she has chosen. She left Iran when she realised that there is no place there for people who are critical of the system. For her, there was no alternative: "I have great respect for those people who continue to live in Iran. I couldn't do it. I need my freedom. Without it, I'm grumpy and get aggressive."

Not only a memoir, but also a 'Bildungsroman': Scene from Marjane Satrapi's "Persepolis" from 2010

​​It's been a while now since she's dared to return to Iran "because you just never know if you're going to get out again." But at the same time she keeps a very close eye on events in her homeland, and views developments there as more far-reaching than in Arab nations.

"Everyone's talking about the Arab Spring, but to be honest I don't see much evidence of that when I watch the television reports." She only ever saw men at the street demonstrations, she says with sudden earnestness. But without equality, democracy cannot flourish.

Iran, she says, is much more progressive than other Arab nations in this regard. In Iran, women would protest along with the men, they would study, work and not allow men to tell them how to live their lives. "There's something really fundamental happening here, society is undergoing a transformation from below," says Satrapi, visibly proud. She's certain she will return home one day. Even if it's only to be buried in Iranian soil.

No other Western poet was arguably so well-versed in the Koran or so fascinated by Islam as Germany's national hero, Goethe. In a new publication that examines all Goethe's ... END_OF_DOCUMENT_TOKEN_TO_BE_REPLACED

A deluge of books, movies, series and cover stories: ever since the events of 9/11, the West has seemed almost manically preoccupied with Islam. Yet this has rarely led to deeper ... END_OF_DOCUMENT_TOKEN_TO_BE_REPLACED

Two decades after the attacks of 11 September 2001, the West faces the shattered debris of its failure – not only in Afghanistan, but also in Iraq, Syria, Libya and Yemen. What ... END_OF_DOCUMENT_TOKEN_TO_BE_REPLACED

Following the Taliban's power grab, members of the Hazara minority fear they will be targeted. Those who can, escape. Others have joined the armed opposition. But for many, there ... END_OF_DOCUMENT_TOKEN_TO_BE_REPLACED

One thing the regime in Tehran has in common with the Taliban is that they both dislike the USA. But apart from that, Tehran has a number of issues with its neighbour, writes ... END_OF_DOCUMENT_TOKEN_TO_BE_REPLACED

Although the United States clearly could have done a better job of managing its departure from Afghanistan, the tragedy playing out this month has been 20 years in the making. ... END_OF_DOCUMENT_TOKEN_TO_BE_REPLACED
Author:
Kathrin Erdmann
Date:
Mail:
Send via mail

END_OF_DOCUMENT_TOKEN_TO_BE_REPLACED
Social media
and networks
Subscribe to our
newsletter