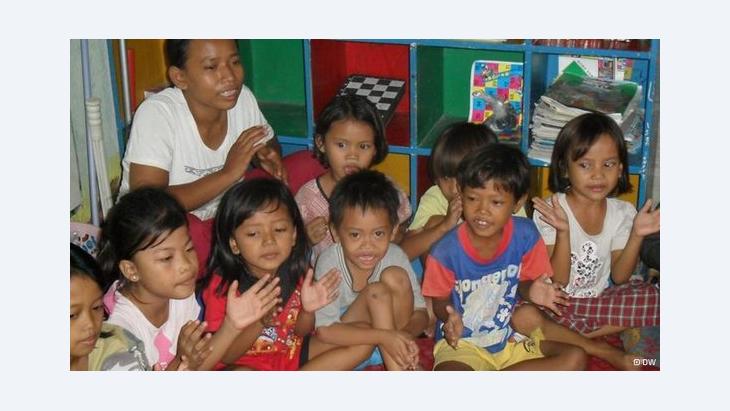 Around one fourth of Jakarta's 18 million residents live in slums - among them, 1.5 million children. A European project is helping them climb out of poverty through education. By Thomas Latschan

It is class time at the Community House of Manggarai, a slum right in the middle of Jakarta. Around 30 children between the ages of four and seven sit squashed together in a circle on the floor and study. A number of activities involving music, group work and quiz games aim at preparing them for school.

But this kind of care cannot be taken for granted; without the Indonesian School Children Organisation's (ISCO) Community House, these children would probably not be able to go to school.

The children learn the basics in science, math, Indonesian, English and art, explains Ledi, a volunteer tutor with the ISCO. In Indonesia there is compulsory education, but basically only in theory. The children who grow up in slums do not have birth certificates and are not registered. So no school will take them.

The ISCO's Community House is a somewhat slanted, rickety wooden house. But in comparison to the places the slum children live, it almost seems luxurious, says Ledi. "They are all one-room houses in which five to seven people live. The conditions are very poor." 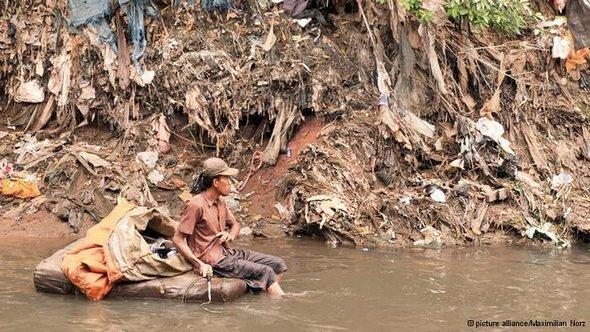 On Indonesia's main island Java alone there are said to be up to five million children growing up in slums. Most of them try to make ends meet by working as rag pickers, as this young man from Manggarai

​​Hardly anyone in Manggarai has enough to survive. Most of the slum dwellers try to make ends meet by working as rag pickers. The children often have to start helping their families earn money early on.

On the main island Java alone there are said to be up to five million children growing up in slums. Their fate is of great concern for Josef Fuchs. The Austrian businessman has lived in Indonesia for over 30 years.

Over 13 years ago, he and a French partner founded the ISCO to try and give at least some of the country's neglected slum children a fighting chance. The foundation has made it possible for 2,500 children to attend school. The ISCO is now active in 29 slums in Jakarta, Surabaya and Medan.

At the heart of the organization is the so-called Community House - the place all the slum children come together. It is a kind of all-day preschool; in the first half of the day, it offers a kindergarden for the younger children and for the older students, it provides supervised homework time in the afternoons. The children also receive food there. "They only have to bring food from home once a week," Fuchs explains. "That is to make sure their parents cook at home and don't become fully dependent on us."

A chance for all kids

Fuchs explains that the ISCO does not select children on the basis of their intelligence. So that as many children as possible receive the chance to get preparation for school. The ISCO does not operate its own schools, but instead, cooperates with government schools. It is a program that works, says Fuchs: "Twenty-two percent of our children are among the top ten of their classes."

The ISCO bears the school expenses for its students. The costs include transportation, uniforms and textbooks. The organization also provides tutors who assist the children with their homework. And the organization does not desert the children after they have received an education. "We can guarantee that these kids also receive vocational training after highschool."

Not long ago, a young Indonesian woman made it all the way from the slum to university. But that is a far way to go for most of the students. Up to that point, the ISCO is there for them every day. After school, they are required to check in at the Community House. Staff there is responsible for making sure the children are healthy and that they were in school instead of out working.

It seems as though most of the children of Manggarai are not taking the service being provided to them for granted. They eagerly listen to what tutor Ledi has to say. The teacher is also pleased with how her pupils are performing in class. "Most of the children like coming here," she explains. "They look forward to coming here to play and study so they have a better future."

Research project "The Global Qur'an", brainchild of Professor of Islamic Studies Johanna Pink and sponsored by the European Research Council, analyses the history and ... END_OF_DOCUMENT_TOKEN_TO_BE_REPLACED

At a time when even some rich democracies are electing con men as their political leaders, the success of Indonesian President Joko Widodo deserves wider acclaim and appreciation ... END_OF_DOCUMENT_TOKEN_TO_BE_REPLACED

On the Indonesian island of Java, one librarian has started a mobile library, lending books to children in exchange for plastic rubbish. The idea is that they will learn to take ... END_OF_DOCUMENT_TOKEN_TO_BE_REPLACED

Water buffalo and oxen have been part of the work in Indonesian fields for centuries. But the draught animals are no strangers to sport either, as can be seen in two traditional ... END_OF_DOCUMENT_TOKEN_TO_BE_REPLACED

According to the latest Reuters tally, more than 2.54 million people are now reported to have been infected by the novel coronavirus globally and 177,004 have died. As Muslims ... END_OF_DOCUMENT_TOKEN_TO_BE_REPLACED
Author:
Thomas Latschan
Date:
Mail:
Send via mail

END_OF_DOCUMENT_TOKEN_TO_BE_REPLACED
Social media
and networks
Subscribe to our
newsletter