Skip to main content
The Contemporary Art Scene in Syria

New Kid on the Block

Arab countries have not exactly been conspicuous on the art scene. Now, however, all that is changing as international auction houses and Syrian art gallery owners are doing their best to make Syrian art the next big thing. By Mona Sarkis 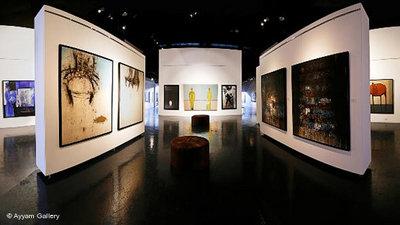 ​​The group of Bohemian philosophers debating the social value of painting would not be out of place in the world of Puccini – a few more flickering candles and the smell of hot wax are all that is missing. But this is happening here and now in the Sarouja souk in contemporary Damascus. Painting, they conclude, is relevant, but not in Syria. "Who here would compare their love to a painting," ask the twenty-somethings, possessively guarding the exclusive right of poetry as the only appropriate vehicle for declarations of love.

Khaled Sammaoui has other things on his mind. In the most exclusive area of Damascus, he is busy organising the opening of the latest exhibition in his three-year-old gallery. And what about the interest in art among Syrians? Rudimentary!

But for someone as fortunate as Sammaoui, who appears the very embodiment of globalisation, that doesn't matter. After all, his customers are to be found all over the world – Los Angeles, Basle, Hong Kong – everywhere, except Syria.

It seems that it is all happening "except in Syria". Yet it is the Syrian art scene that is making all this possible. It was the ripples caused by Christies auction of "Modern Art of the Middle East" that first ruffled the surface of what, in international terms, until then had been a placid artistic backwater. In 2005, the auctioneering giants opened their first office in Dubai. Bonham's and then Sotheby's, who opened an office in Doha this year, followed their lead.

​​Iranian artist Farhad Moshiri, unknown till recently, now commands up to 600,000 dollars for his work. Egyptian Ahmed Moustafa has topped the 650,000 mark and the Syrian stars, "who would once have received around 3,000 dollars for one-and-a-half metres of canvas, now fetch 15,000 dollars," laughs Sammaoui.

The art dealer and former Swiss banker has long expected a boom in Arab art; something he predicts will happen within the next five years. The confidence is not without foundation. In 2008, a painting by Fateh al-Moudarres sold for around 300,000 dollars at Christie's.

But just what is "Syrian art"? At Meyssa Shehab's brand new gallery, Tajallyat, where one arrives in a silver-grey, chauffeur-driven limousine with tinted windows, the gallery owner prefers to seek the answer elsewhere rather than provide one herself. But the answer from the art critic consulted doesn't bring us much further. Sammaoui, too, fails to enlighten.

​​In order to come up with an answer, we have to look back to 1960, to the opening of the Damascene art academy. Back then a figurative surrealism-expressionism blossomed, one that sought to transcend the native visual heritage. Everything finds a place here: Arab shadow theatre, two-dimensional Islamic art with its absence of light and shade, the Canaanite demons, the Palmyrene winged creatures, and the all-pervasive Sufism that was and is so characteristic of Syria.

In contrast to other Muslim countries the secular Syria never banned this mystical dimension of Islam.

It is these strongly coloured figurations by artists such as Elias Ziad or Nazir Nabaa, now around 70 years old, and the less melodramatic works of Edward Shahda, Asaad Arabi or Fadi Yazji, produced in the 1980s, that still influence the younger generation today.

The kind of subtle, abstract art being produced by artists such as Abdallah Murad, on the other hand, has found few followers. This is surprising, particularly in a Muslim country where religiously motivated ban on images largely restricted art to calligraphy and the ornamental for centuries.

​​Yet, nowadays, it is figurative representation that is very much in demand. One reason for this is undoubtedly the fact that the strictures of Islam never succeeded in becoming all-pervasive in Syria.

The dictatorial surveillance state, on the other hand, is omnipresent. So it is hardly surprising that the visual arts in general appear rather innocuous, lacking in challenge.

Take for example the works of the talented 26-year-old Abdelkarim Majdal al-Beik, who visualises the theme of time by depicting dilapidated old house walls. One might be tempted to ask why the artist ignores the question of what is going on behind those walls.

But apart from the fact that the desire for a politically and socially engaged art is perhaps primarily a Western phenomenon, one also has to realise to what extent the omnipresent secret service is part of everyday life in Syria.

To get an idea of this, it is enough to take one of the shared taxis from Damascus to Sednaya and to witness for oneself how the mere sight of the large prison building in Sednaya is sufficient to suddenly and completely silence the passengers.

Syria's modern art is, nevertheless, much more than just a nice – and lucrative – trend. It has given a new artistic self-image to young people.

​​Take Hibba al-Aqad, for example. The 27-year-old sits alone, far removed from the trendy art scene, atop a pile of material, sticking pieces of fabric together. She works obsessively, trying to achieve plasticity from the flat, lifeless strands of fabric. It is, she says, her way of getting to grips with her legacy as a woman. For as long as she can remember she has been surrounded by sewing women.

Getting to grips with things seems to be a recurring theme in the life of this young artist with the Frieda Kahlo eyebrows. It was her single-minded determination that finally brought her strictly conservative family, for whom pictures are taboo and the veil obligatory, to allow her to attend the art academy.

Her professors at the academy were allowed to have as little influence on her fabric collages as her husband on her life. After seven months of marriage she made the decision to cast off both husband and headscarf.

A new catalyst for the young

This would seem, at first sight, to tell us very little about the cultural significance of emergent Syrian art. But wherever art has to do with doubt and with genuine self-questioning, it is a force for revitalisation.

Proof of this is to be found in the Sarouja souk where the group is angrily debating why it is that art is so ignored in the country. The counter question – "Why are you here?" – does seem to bring us rather full circle.

It is a refreshing group of art enthusiasts, some of them from the country, who have a selection of day jobs, including chemist. Yes, something is happening in Syria – even if the smell of burning wax is likely to linger on for quite some time.

The "Beirut Art Center"
Experimental Art in an Industrial Zone
The new "Beirut Art Center" sees itself as an independent art space with an ambitious programme for bringing contemporary art forms to a wider public. Charlotte Bank reports from Beirut

Contemporary Art from Saudi Arabia
The Kaaba as a Security Zone
A new generation of young Saudi artists is emerging, showing that momentum for change is possible even in a conservative country such as this. When it comes to exhibiting their work however, they have only been able to do that abroad. Werner Bloch reports

END_OF_DOCUMENT_TOKEN_TO_BE_REPLACED
Social media
and networks
Subscribe to our
newsletter