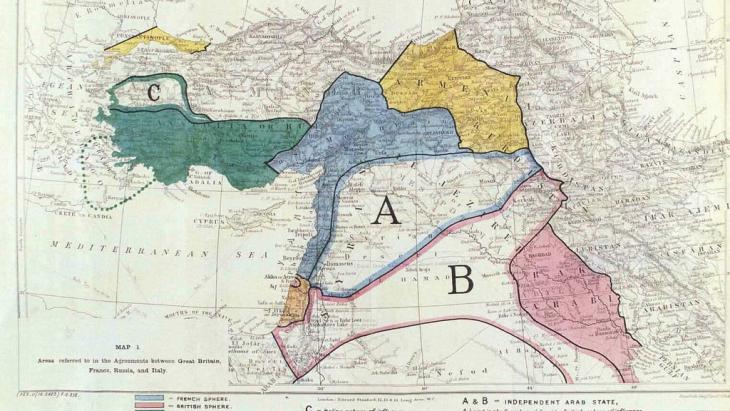 The crisis of the Arab nation state

A world war turned the Ottoman Arab provinces into modern nation states a century ago, but today they are being unravelled by many, highly localised wars that have yet to run their course. Their causes long predate the Arab Spring, asserts Yezid Sayigh

The dramatic spread of the Islamic State of Iraq and the Levant from Syria to Iraq in 2013 and its proclamation of the caliphate a year later generated considerable speculation about the end of the British-French Sykes-Picot agreement that divided the Levantine provinces of the Ottoman Empire nearly a century ago.

But while most of the commentary focused on the eradication of national borders, there has been much less attempt to explore the more significant implications for the nation states contained within them. It is there that the end of the Sykes-Picot system appears to be ending for certain states, not only in the Levant, but also in the wider Arab region.

For all the talk of the artificiality of the borders assigned to the newly-established Arab states by the Sykes-Picot agreement, these have in fact been among the most stable – if not the most – compared to other regions of the world. The transfer of Alexandretta from French mandate Syria to Turkish sovereignty in 1939 and Spanish decolonisation of the Western Sahara in 1975 were delayed adjustments of the post-World War One dispensations.

Unification between North and South Yemen in 1990 and the independence of South Sudan in 2011 was significant, but only underlined the complete redrawing of maps that took place in Central and Southeast Europe, South and Southeast Asia, sub-Saharan Africa, the Soviet Union and its successor states over the same century.

Even in the case of the one Arab border to be erased of late – between Iraq and Syria – it is in fact still observed by the Islamic State in its own administrative boundaries, as well as in the power relationship between its core leadership in northern Iraq and its Syrian provinces. 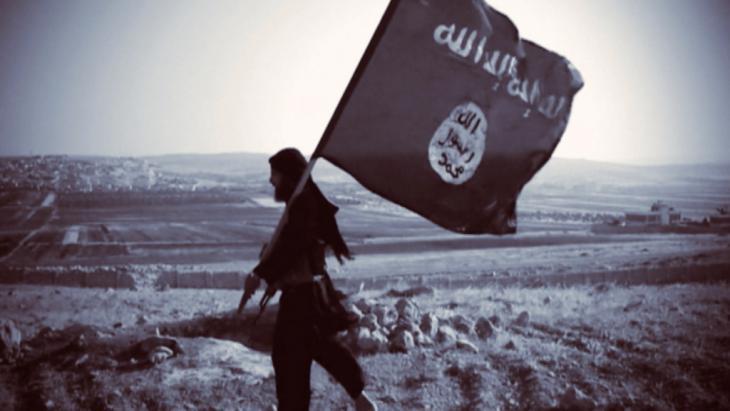 Built on the debris of the old order: "Even in the case of the one Arab border to be erased of late – between Iraq and Syria – it is in fact still observed by the Islamic State in its own administrative boundaries, as well as in the power relationship between its core leadership in northern Iraq and its Syrian provinces," writes Yezid Sayigh

The far more significant challenge to the Sykes-Picot system instead appears within individual nation states. Over the preceding century these went through three main phases: the ″colonial states″ established in the wake of World War One, post-independence states that assumed sovereign functions after World War Two and authoritarian states that emerged in the course of military coups d′etat in the 1950s and 1960s and that stabilised from 1970 until the Arab Spring of 2010-2011. Particular modes of political rule varied from one phase to another and from one state to another,  along with their associated constitutional frameworks, governing institutions and administrative measures – as did their systems for the redistribution of social and economic wealth.

This was evident, for example, in the overthrow of the Egyptian, Iraqi, and Libyan monarchies and adaptation of those in the Gulf, Jordan and Morocco; dissolution of bourgeois parliaments; rise of new, largely rural social classes, as well as land reform and economic nationalisation in the agrarian republics; not to mention the massive expansion of rentier systems in both socialist-leaning and free market-oriented countries.

Despite these significant and far-reaching transformations, transitions were achieved without state breakdown; power passed from hand to hand and was consolidated through new political configurations and social alliances. In each case, new governments were able to forge relatively stable and resilient relationships between the structures through which they exercised direct power – ruling parties and the coercive apparatus of state – and the means of generating revenue and forming capital, thus reshaping state-society relations.

The convergence of multiple factors over the past two decades or more, however, has strained the ability of many Arab states to accommodate growing pressures within longstanding power balances, making the current phase of transition inherently far more dangerous for them.

Most threatening have been the explosion of populations – generating a massive youth bulge, coupled with dwindling employment opportunities, productivity and skills, ever-widening income disparities driven by crony economic liberalisation and predatory privatisation, as well as the erosion or dissolution of social pacts under the cumulative impact. The decline in disposable surplus wealth – especially net income from oil production, but also other forms of rent – has been so sharp, indeed, that even formerly privileged patronage networks and social constituencies have suffered.

Post-Ottoman system also on the verge of collapse? The structure imposed by the West with the 1916 Sykes-Picot agreement has never been popular with the countries of the Middle East – indeed some regard it as the source of all evil

The specific circumstances vary enormously from one Arab state to another, but in each the crisis derives from a similar inability to maintain the existing relationship between the structure of power and the means of capital formation and distribution – or to restore it once lost.

As a result, previous understandings about the purpose of the state and nature of citizenship that underlay social pacts and underpinned political stability – embodied in certain entitlements and obligations, whether formal or tacit – have largely come undone. More worrying still, they have not been replaced by clear alternatives. Even the claim to legitimate rule made by the self-styled Islamic State on the basis of a stark binary between believers and excommunicated unbelievers does not meet this need, since it precludes all forms of societal negotiation about the implementation of governance or any aspect of public policy.

Both driving this trend and reflecting it has been the deepening ambiguity of constitutional frameworks – whether formal or informal – governing national politics and daily life in a number of Arab states. Acceptance of common, binding ″rules of the game″ governing political contestation, constraining the resort to violence and maintaining basic social peace was not provided in Iraq, for example, despite the introduction of a new, democratic constitution after 2003 – and certainly not in Syria′s constitutional tinkering of 2012.

The Palestinian Authority and Lebanon have suffered a similarly debilitating constitutional paralysis since 2007 and 2014 respectively, if not considerably earlier, while attempts to construct wholly new frameworks and political systems in Libya and Yemen have collapsed completely since 2014. Even Egypt, which is regarded as possessing an especially ″strong″ state, is no longer governed by a credible framework, after no less than three constitutional referendums and nearly half a dozen constitutional declarations by successive administrations since 2011. 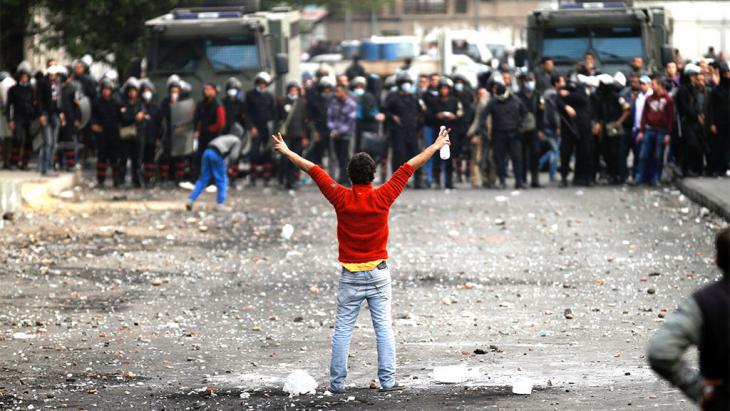 Loss of social peace: contests over access to social resources and economic opportunity have become increasingly bitter in a growing number of Arab states, reflected in the intensification of communal politics – sectarian, ethnic, regional, and tribal

These instances demonstrate graphically that incumbent rulers treat constitutional frameworks as entirely malleable, capable of being moulded and remoulded endlessly to meet the obvious purpose of maintaining and legitimising their political power. But what they also show, more importantly, is that this approach no longer works.

In this context, contests over access to social resources and economic opportunity have become increasingly bitter in a growing number of Arab states, reflected in the intensification of communal politics – sectarian, ethnic, regional, and tribal. It is proving impossible to restore even the kind of imposed false ″social peace″ that held Arab states and their societies together previously, even though significant numbers of people are ready to accept the old mix of coercion and co-optation again in order to regain a semblance of normalcy and stability.

Indeed, although the previous governing order has either ceased to function or is on its way out in these states, replacing them with a new set of mini-states based on partition or cantons along communal lines may not offer a real solution. Sadly the initially hopeful experiences of Iraqi Kurdistan or South Sudan, for example, have merely replicated the patterns they sought to break away from. This underlines that Arab states can no longer be reconstructed according to past blueprints, even when powerful external actors attempt to restore them.

A world war turned the Ottoman Arab provinces into modern nation states a century ago, but today they are being unravelled by many, highly localised wars that have yet to run their course. Their causes long predate the Arab Spring, which has been unfairly accused by some of bringing about this grim prospect. The result is destined to be protracted conflict, instability and a fundamental inability to reach a new socio-political equilibrium within many Arab societies for years to come.

Sayigh is a senior associate at the Carnegie Middle East Center in Beirut, where his work focuses on the Syrian crisis, the political role of Arab armies, security sector transformation in Arab transitions, the reinvention of authoritarianism, and the Israeli-Palestinian conflict and peace process.

Home
Print
Newsletter
More on this topic
Volker Perthes: "The end of the Middle East, as we know it": The end of Sykes-Picot? The global risks of an imploding Middle East: A region in flamesThe geopolitical situation in the Middle East: Between terror and the dissolution of order
Related Topics
'Islamic State' | IS, Arab Spring, Arabellion, Colonialism, History of the Near and Middle East, Islam and the West, Syrian Civil War
All Topics

Reading Hassan Blasim's God 99 is an immersive experience of grief and exaltation, anger and disgust, writes Marcia Lynx Qualey. We join the Iraqi narrator as he sits around in ... END_OF_DOCUMENT_TOKEN_TO_BE_REPLACED

By stage-managing his re-election in a poll widely dismissed as a farce, Syria's President Bashar al-Assad has killed two birds with one stone: he has forced his compatriots to ... END_OF_DOCUMENT_TOKEN_TO_BE_REPLACED

In his book "Ground Zero: 9/11 und die Geburt der Gegenwart" (Ground Zero: 9/11 and the Birth of the Present) Islamic scholar Stefan Weidner analyses the consequences of the ... END_OF_DOCUMENT_TOKEN_TO_BE_REPLACED

The rollout of coronavirus vaccines in the Middle East and North Africa is already taking place on a massive scale, with the United Arab Emirates leading the way. Nevertheless, ... END_OF_DOCUMENT_TOKEN_TO_BE_REPLACED

German Middle East analyst Guido Steinberg and television journalist Ulrich Tilgner have both published new books on the conflicts in the Middle East. Their analyses and their ... END_OF_DOCUMENT_TOKEN_TO_BE_REPLACED

END_OF_DOCUMENT_TOKEN_TO_BE_REPLACED
Social media
and networks
Subscribe to our
newsletter