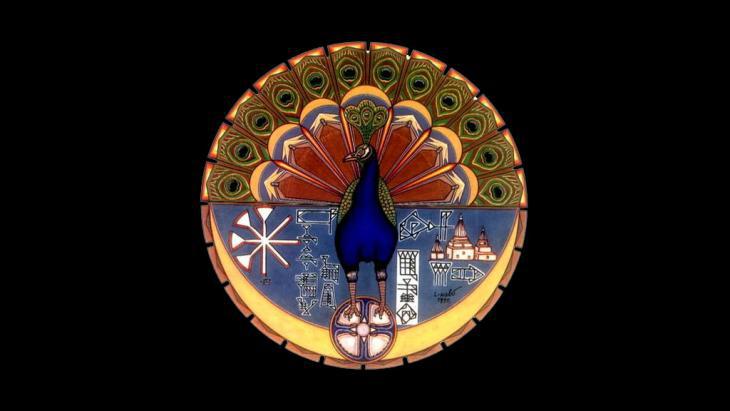 The culture and faith of the Yazidis

Their persecution by Islamic State has put the Yazidis in the international spotlight. In her book on the Yazidis, Birgul Acikyildiz provides insights into the culture and faith of this endangered community. By Ulrich von Schwerin

In August of this year, the flight of tens of thousands of Yazidis from the jihadist group Islamic State (IS) into the Sinjar mountains of northern Iraq sent shock waves around the world. The threat of genocide hung over this small religious community, which has for centuries been repeatedly subjected to persecution and expulsion, alarming the world community. With international support, Syrian Kurd fighters ultimately succeeded in bringing most of the Yazidis down from the mountains to safety. But there are still regular reports of executions, forced conversions and the enslavement of Yazidi women.

But why are the Yazidis being persecuted? Despite the widespread interest in their fate, little is known about their origin, their culture or their faith. In her book "The Yezidis", the Turkish Orientalist and art historian Birgul Acikyildiz provides a clear and comprehensive introduction to this religious community, which could soon disappear forever from the Middle East.

For her research, Acikyildiz made several trips between 2002 and 2005, some of them quite adventurous, to areas inhabited by Yazidis in northern Iraq as well as Syria, Armenia and Turkey.

According to the author, a total of 518,000 Yazidis lived in northern Iraq before the recent conflict, 300,000 of them in the Sinjar region alone. The Yazidi communities in the neighbouring countries are much smaller, particularly since most Yazidis in Turkey have emigrated to Germany since the 1960s. The great majority of Yazidis are Kurds. In the autonomous Kurdish territories in northern Iraq, where the most important sacred sites of the Yazidis are located, they enjoy protection and respect; otherwise, relations between them and Muslims are fraught with tension.

One of the region's oldest religions 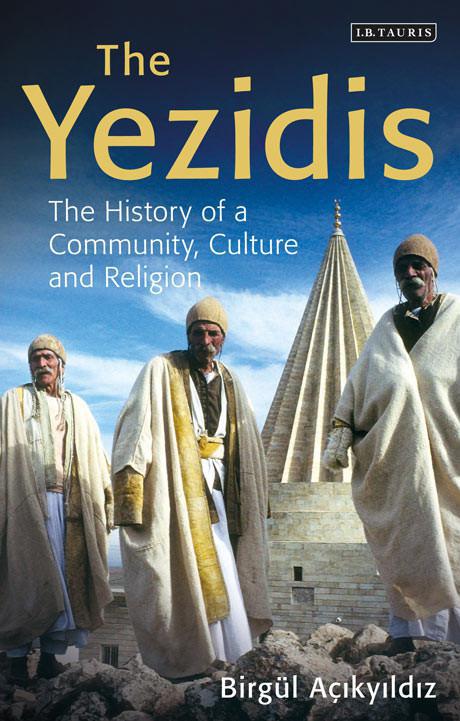 "How they intend to protect themselves from extinction remains an open and pressing question," writes Acikyildiz. "Without international protection, the survival of the Yazidi culture is at risk."

Although the Yazidis consider theirs to be one of the region's most ancient religions, their current practice can in fact be traced back to Sheikh Adi (1073–1163), a Muslim Sufi scholar who withdrew from Baghdad to the Lalish Valley in northern Iraq, where he founded a monastery and established the Sufi Adawiyya order. Some of the local residents, who practiced a faith influenced by ancient Iranian religions such as Zoroastrianism, joined Sheikh Adi and adopted his teachings. After his death, however,they contributed elements from their own faith to the new religion.

By the fifteenth century, a separate Yazidi religion had developed, which to this day is handed down generation to generation by an oral tradition, primarily through religious chants. Although the faith incorporates individual Islamic elements, it is, generally speaking, quite different from Islam.

The Yazidis believe in a god (Xwede), who made "Melek Taus", the Peacock Angel, his representative on earth. "Melek Taus" is the head of the seven angels and, together with Sheikh Adi and Sheikh Ezi, is part of the Yazidi Holy Trinity, whereby Sheikh Ezi can probably be traced back to the Islamic Caliph Yazid.

"Melek Taus", whose symbol is the blue peacock, plays a central role in the Yazidi faith. The fact that this angel figure also exists in Islam and in Christianity, but is equated there with Satan (a fallen angel), led to the Yazidis being regarded as "devil worshippers".

As Acikyildiz points out, this is a misunderstanding, because "Melek Taus" does not embody Satan for the Yazidis. The angel does not have any demonic attributes and is not considered an adversary of God, but rather a mediator between God and man.

Branded as heretics and oppressed

The Yazidis have nevertheless been branded as "devil worshippers" and have repeatedly been the victims of persecution. The Yazidis are monotheists. They are not regarded by Muslims as followers of a book religion, such as Jews and Christians, but as infidels and apostates from the Islamic faith. The situation was exacerbated during the Ottoman Empire when the Yazidis refused to pay taxes or do military service. In 1890, the Ottomans set them an ultimatum to convert to Islam. When they refused, their homelands in Sinjar and Shekhan were occupied and the inhabitants massacred.

During the First World War, the Yazidis were once again persecuted along with the Armenians, causing thousands to flee to Soviet Armenia. As Acikyildiz writes, the experience of oppression made the Yazidi community increasingly turn inward and treat outsiders with caution. They marry almost exclusively within their own community and also observe a prohibition against marriage between the three so-called "castes". Anyone who flouts the rules and marries a Muslim or Christian is henceforward excluded from the community. It is not possible for outsiders to convert to the Yazidi faith. 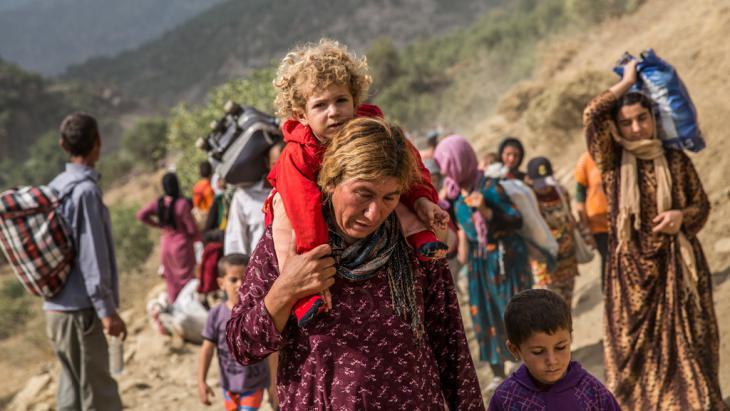 Yazidi refugees in the Sinjar Mountains: in the summer of 2014, the world was moved by the plight of Iraq's Yazidis, who sought refuge in the Sinjar Mountains as they fled the jihadi fighters of Islamic State. The Islamists consider the Yazidis to be "devil worshippers" due to the fact that the Yazidi's chief angel takes the form of a peacock, which is usually associated in Islam with the devil

Acikyildiz portrays the Yazidis as a strongly patriarchal community in which women are responsible primarily for raising children and tending the household. When she wanted to eat dinner in a restaurant in the city of Behzane in the course her research, she was told that women don't do such things. She nonetheless persisted, thus becoming, as her tour guide told her, the first woman to ever eat in public in Behzane. In rural communities, marriages are still arranged by parents. The level of education is low – not too long ago, reading and writing were still reserved for the clerical caste.

In her book, Acikyildiz describes in detail the architecture of the Yazidi tombs and shrines, which feature conical ribbed roofs. As there are no places of worship comparable to mosques or churches, the mausoleums of the saints, in particular the tomb of Sheikh Adi in Lalish, play a central role in rituals and festivals.

According to Acikyildiz, there is no tradition of common prayer; instead, everyone prays on their own, facing the sun. These prayers do not take any established form, nor is prayer or fasting obligatory.

As described by Acikyildiz, the Yazidis appear to be a non-dogmatic yet deeply traditional community. They have been the victim of attacks by radical Islamists ever since the US invasion of Iraq in 2003, with more than 500 members of the faith killed in August 2007 alone.

Their persecution by IS terrorist militias has now reached a level that threatens the very existence of this ethnic group. "How they intend to protect themselves from extinction remains an open and pressing question," writes Acikyildiz. "Without international protection, the survival of the Yazidi culture is at risk."

Birgul Acikyildiz, "The Yezidis: The History of a Community, Culture and Religion", I.B. Tauris (London, 2014)

Home
Print
Newsletter
More on this topic
The abduction of women by IS: Traded like cattlePhoto gallery: Between fear and annihilation – Yazidi refugees in IraqYazidis and Kurds in Iraq: Are we arming the right people?Persecution of the Yazidis in Iraq: Don't abandon us!
Related Topics
'Islamic State' | IS, Book reviews, Jihadism | Jihadists, Middle Eastern studies, Minorities in the Muslim world, Yazidi, Zoroastrianism
All Topics

As the photo of Fairouz talking to French President Emmanuel Macron spread around the world, many asked if Arabs today had any contemporary stars of Fairouz's standing. In this ... END_OF_DOCUMENT_TOKEN_TO_BE_REPLACED

The four short films produced as part of the "Women Make Film" project are well worth seeing. They grapple with the ghosts that haunt Iraq: the horrors of IS rule, outdated gender ... END_OF_DOCUMENT_TOKEN_TO_BE_REPLACED

Ten years after the start of the Arabellion in North Africa and the Middle East, many view the movement as a failure. But rather than being over, it has now entered a more mature ... END_OF_DOCUMENT_TOKEN_TO_BE_REPLACED

Conceived by Israeli journalist and rabbi Elhanan Miller, "People of the Book" is a YouTube project designed to provide information on Judaism in Arabic. Disarming prejudice with ... END_OF_DOCUMENT_TOKEN_TO_BE_REPLACED

The second volume of “Mit den Augen von Inana” (Through the Eyes of Inanna) is an impressive collection of purely female perspectives on modern Iraq, from the Saddam era through ... END_OF_DOCUMENT_TOKEN_TO_BE_REPLACED

Musicians from Morocco to Iraq have been crossing paths at the Oriental Summer Academy in south-western Germany for ten years. Matthias Wagner, who founded and directed the ... END_OF_DOCUMENT_TOKEN_TO_BE_REPLACED
Author:
Ulrich von Schwerin
Date:
Mail:
Send via mail

END_OF_DOCUMENT_TOKEN_TO_BE_REPLACED
Social media
and networks
Subscribe to our
newsletter