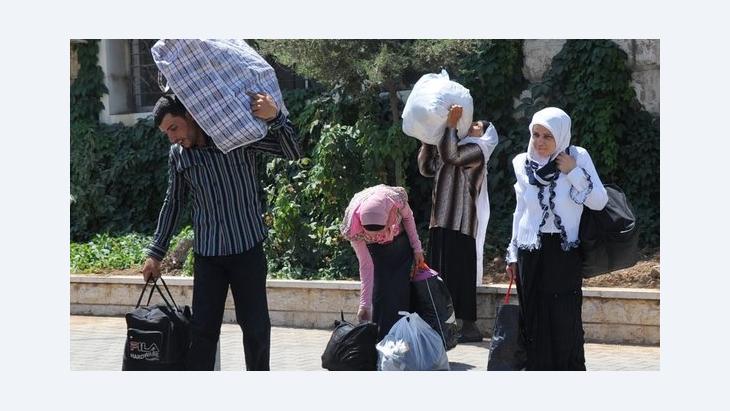 The Destiny of the Syrian Refugees

''The Floodgates of Humanity Must Be Opened Immediately''

Christian Springer is a popular German author who is best known for his social and political satire. He is also the founder of the aid organization Orienthelfer (Orient helpers), which has been helping Syrian refugees in Jordan and Lebanon since the start of the uprising against the Assad regime. Samira Sammer spoke to him about the refugees' humanitarian predicament

Herr Springer, you founded the aid organization Orienthelfer and collect donations to help Syrian refugees in Lebanon and Jordan. What do these people need most?

Christian Springer: Of those refugees who made it to Lebanon, 7,000 Syrians have found refuge in Wadi Khaled in northern Lebanon. Most of them are from the district of Homs. Many of the wounded cannot be treated in Syria and need one thing above all else: emergency medical care!

But unfortunately operations are expensive, and Lebanese hospitals can't treat all the refugees for free. Many Lebanese doctors are performing operations either for a reduced fee or no fee at all, but obviously these procedures only go some way to addressing the problem. Urgently needed second-stage operations are not taking place and rehabilitation provisions cannot be made. The refugees don't have the money for that. 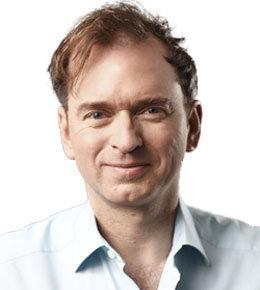 ​​The people here are suffering terribly. With the help of my organization, we're trying to facilitate urgent operations for the wounded. We want to supply people with humanitarian aid.

The last time I was in Lebanon, we were able to save the life of a Syrian boy who'd been shot in the head and was being fed through a tube. His injuries were life threatening. The operation cost 6,000 dollars – the doctors say it went well – and yesterday I got word that the boy was on the road to recovery and that he is even able to laugh. He can eat, and the paralysis has gone.

It's moments like these that give me and my team the strength to continue this work. But because our budget is very limited, we can't help all the wounded refugees. I have to decide who will receive what operation, and this is a very difficult decision, a huge responsibility that I have to bear in such instances. But that's the duty of the aid worker; you feel wretched in the face of such helplessness.

The International Red Cross is still not allowed to treat the wounded in Syria. Thousands of people with terrible injuries are crossing the country's borders every day in the hope of finding medical assistance. This is one of the worst crimes against humanity committed in our time – this failure to provide medical treatment to badly injured people – and a disgrace for Western European nations, which are watching the humanitarian catastrophe unfold without taking any action.

In Syria, people are not allowed to be treated in state-run hospitals because the government views anyone injured in the conflict – whether they be women, children or men – as terrorists.

One hundred and fifty years after the Geneva Conventions, which stipulated that civilians not involved in any fighting should receive medical assistance, the international community continues to look on as thousands of people suffer a terrible death because they are not getting the help they need. It's a violation of the most profound sense of humanity; humanitarian aid is the highest good that should be made available to people.

Which aid organizations are present on the ground? How does your organization differ from the others?

Springer: Among those present in the refugee camps of Lebanon and Jordan are the UNHCR (United Nations High Commissioner for Refugees), the International Red Cross and several Islamic aid organizations such as Islamic Relief. 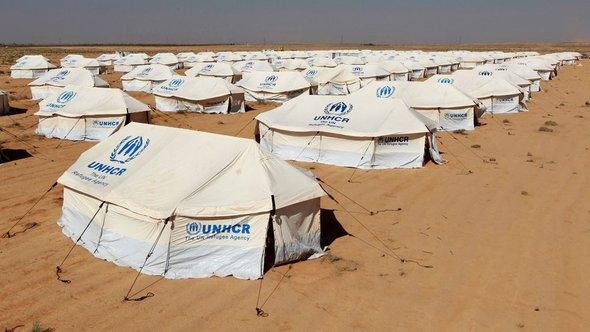 At the end of July, Jordan opened its first official refugee camp for those fleeing the conflict in Syria. It has provided enough land to eventually house up to 100,000 people – a massive number, especially considering that Jordan already has over 1 million refugees from Iraq and Libya and its water reserves are under enormous strain

​​But unfortunately this aid doesn't reach all the refugees. Many people are afraid of the Syrian secret police and don't register with the aid organizations. But people can only get help if they're registered.

Our aid organization is very small, but with the help of our Syrian friends, we reach the very people whom the big organizations don't reach. We're a small association with just seven members, and of course we are all here in a voluntary capacity. This means no administrative costs are incurred and 100 percent of the money that's donated to Orienthelfer reaches the Syrian refugees. All travel expenses for myself and my team – air tickets, fuel, rental cars and bed and board – are paid for by myself and a sponsor out of our own pockets.

Are there state-organized refugee camps in Lebanon comparable with those in Turkey?

Springer: No, unfortunately not! There are now between 20,000 and 40,000 refugees in Lebanon. The Lebanese government doesn't want to recognize the Syrians as refugees, but rather views them as guests who will be granted permission to stay for a short time. Some politicians are even negating the fact that there are thousands of Syrian refugees in the north and claim it's just a few families.

Syria and Lebanon share a troubled past. Lebanon is very small, and there are fears that the civil war could spill over into the country. Nevertheless, it's still hugely important that the Lebanese government recognizes the Syrians' refugee status so that they can get access to international aid.

The conflict is even affecting local Lebanese people in the north of the country. Wadi Khaled is repeatedly coming under Syrian army rocket fire, and snipers randomly target people – especially at night. The Syrian government claims there are Islamist terrorists and Salafists in Wadi Khaled who represent a threat to the region.

The people we found there were traumatized children and injured men and women who were able to escape the hail of bombs unleashed on them by Syrian troops. Both Syrians and Lebanese are finding themselves in the firing line.

Wadi Khaled has been sealed off militarily. The refugees are not allowed to leave the valley and must remain in their quarters. We've also not been allowed to enter over the past few weeks. We have to hand over our medical supplies, toys, baby clothes and much more to our friends at the checkpoint.

Many Lebanese people are trying to help the refugees. In doing so, they are becoming targets themselves. But these helpers have in the meantime reached their limits; the small valley has been sealed off, which means they are all surrounded and exposed to Assad's snipers and bombs. 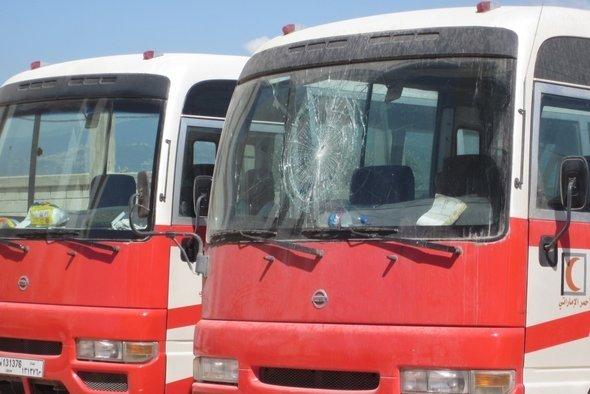 Assad's troops obviously have no qualms about shooting at vehicles belonging to the Red Crescent (pictured above) or at Wadi Khaled in the north of Lebanon, where both Syrian refugees and Lebanese citizens have been affected by the cross-border shelling from Syria

Could you also describe the predicament of Syrian refugees in Jordan?

Springer: Jordan is a country with the highest refugee rate in the world. It is now home to 1 million refugees from Iraq and 35,000 people injured in the civil war in Libya. Now it is having to cope with more than 100,000 Syrian refugees – a huge burden for a country with limited water reserves.

Temperatures climb up to 45 degrees here in the summer. There is international aid in place, but it's not enough to cope with the number of refugees. The floodgates of humanity must be opened immediately. An injured person from Homs cannot seriously be expected to wait three months for a visa.

The refugees urgently need help and it is the responsibility of us all to do something. We can't simply allow Syria's neighbours to shoulder the burden, thereby further destabilizing the entire region. Our guidelines are the Geneva Conventions: immediate aid regardless of origin, religion or skin colour. It's a humanitarian imperative.

The rollout of coronavirus vaccines in the Middle East and North Africa is already taking place on a massive scale, with the United Arab Emirates leading the way. Nevertheless, ... END_OF_DOCUMENT_TOKEN_TO_BE_REPLACED

Faced with a deteriorating economy and a discontented populace, Jordan's ruling family is feeling the pressure. END_OF_DOCUMENT_TOKEN_TO_BE_REPLACED

Founded in 1921 as a temporary solution, Jordan managed to establish itself as one of the most stable countries in the Middle East. The inclusive and flexible approach taken by ... END_OF_DOCUMENT_TOKEN_TO_BE_REPLACED

German Middle East analyst Guido Steinberg and television journalist Ulrich Tilgner have both published new books on the conflicts in the Middle East. Their analyses and their ... END_OF_DOCUMENT_TOKEN_TO_BE_REPLACED

Jordanian author Amjad Nasser, who died in 2019, presents an impressive tale of homelands, life in exile and the hardships of returning home. His profound eloquence and use of ... END_OF_DOCUMENT_TOKEN_TO_BE_REPLACED
Author:
Samira Sammer
Date:
Mail:
Send via mail

END_OF_DOCUMENT_TOKEN_TO_BE_REPLACED
Social media
and networks
Subscribe to our
newsletter