Abu Ghraib – A Criminal Case Staged in the Media?

The documentary "Standard Operation Procedure" won the Silver Bear at this year's Berlin Film Festival. The film deals with the background to the torture in Abu Ghraib. But the outcome is ambiguous, explains Ariana Mirza

​​There are photographs that burn their images into collective memory. The pictures that revealed the torture cases in Abu Ghraib in 2004 certainly fall into that category. The USA's international standing took a massive blow from these "snapshots", like none other since the shocking photos that came out of Vietnam.

Official investigations found only low-ranking soldiers guilty of the terrible crimes committed in the largest US military prison in Iraq. The US government expressly denied any instructions legitimising torture or even knowledge of what was going on at higher levels.

So respect is due to a renowned American documentary maker like the Oscar winner Errol Morris, who wanted to find out how it came to these barbaric crimes and who actually knew about them. Unfortunately, "Standard Operation Procedure" doesn't uncover any new facts. Although Morris does emphasise doubts in the ignorance and "innocence" of higher-ranking soldiers and government officers on several occasions, his focus is a very different one. The director concentrates on aspects that make for spectacular pictures.

That means, firstly, the work of the detectives, which seems to fascinate Morris. Modern technology helps them reconstruct whose camera took what photo at what time. If the first photo was taken at 10 am and the last at 10 pm, for example, detectives can establish how long a victim was tortured. Interesting enough, but simply imparting this information is not enough for Morris.

​​He repeatedly visualises the entire research process with state-of-the-art computer graphics. The screen is covered in quadratic matrices, which comes together into networks; photos are shifted to and fro, linked chronologically, and fitted into the matrix. At moments like this, "Standard Operation Procedure" recalls high-tech crime series like CSI rather than traditional documentaries.

The inserted clips seem just as questionable; mocked-up scenes using slow motion, backlit sequences, close-ups and a psychedelic carpet of sound to make the horror hit home – but coming out as a rather mannered attempt.

This aesthetic trickery keeps turning up whenever Morris feels he has to provide images to match the torturers' statements. The director doesn't seem to trust the virtually ubiquitous photos in his documentary alone to provoke disgust and abhorrence in the audience. 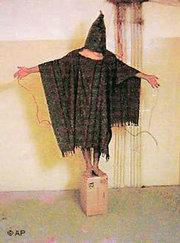 In 2006, a former US Army Brigadier General, in-charge of Abu Ghraib prison until early 2004, said she had seen a letter apparently signed by Donald Rumsfeld which allowed the use of torture in Abu Ghraib

​​Yet "Standard Operation Procedure" is not just high-tech smoke and mirrors; after all, it was entered in the competition as a documentary. Several of the soldiers found guilty are given a chance to speak, along with the general in charge of the prison at the time, an interrogation specialist and a detective working on the case.

The interview sequences with torturers such as Lynndie England are, in fact, the most shocking material in the documentary. None of those interviewed shows signs of being aware they have done anything wrong. Without exception, the torturers all see themselves as victims of the circumstances.

From that point of view, "Standard Operation Procedure" is a worthwhile film, as it provides an impressive explanation of where the torturers' lack of awareness comes from. The terrible photos from Abu Ghraib are presented once again, this time marked with red stamps. Half of the pictures bear the legend "Criminal Act" – when they explicitly show that the prisoners were subjected to physical abused or sexual humiliation.

But the second pile of photos is just as shocking, stamped with the words "Standard Operation Procedure" and meaning the treatment of the prisoners is legally permissible. Looking at these pictures, it is hard to distinguish between what is a crime and what is allowed.

USA/Iraq
"This Does Not Represent the America I Know"
In interviews given to two Arab television stations, US President Bush has called the abuse of Iraqi prison inmates by US troops "abhorrent". Bush promised that those responsible for the abuses would be brought to justice but he stopped short of apologising. In the Arab world, distrust remains

END_OF_DOCUMENT_TOKEN_TO_BE_REPLACED
Social media
and networks
Subscribe to our
newsletter