The Face of the Egyptian Protest Movement

Wael Ghonim became the public face of the protests against the regime in Egypt. An early organiser, he galvanised the public a second time via a widely viewed interview conducted after he left police custody. Loay Mudhoon sends us this portrait of the now famous blogger

Carrying the hopes of the Egyptian protest movement: within the space of only 24 hours, 150,000 Internet users elected Wael Ghonim as their "spokesperson"

​​Ghonim's appearance on the private Egyptian TV channel Dream TV was a moving one. He gave an interview right after he got out of police custody, where he had spent 12 days. During that time, no one knew of his whereabouts.

In the emotional interview, Ghonim fought to find words and even wept. "All mothers and fathers who lost sons, to them I want to say: I am so sorry! But it was not our mistake. It was the mistake of those who abuse power and who want to cling to their power," he told his interviewer.

From the beginning, blogger Ghonim was a leading organiser of the demonstrations in Cairo's Tahrir Square against authoritarian President Mubarak, who ran the Egyptian government for three decades until demonstrators forced him to step down on 11 February. The young Egyptian spent 12 days in prison, and reappeared on Monday, 7 February.

On Tuesday, 8 February, the crowd cheered him on as he gave a speech on Tahrir Square – the epicentre of the protest movement that kept the world spellbound. He seemed to be just what they wanted: a charismatic leader and a figure that people could identify with; a public face for a broader societal problem. 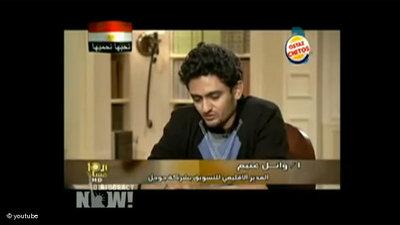 Ghonim launched the Facebook page "We are all Khaled Said", which is named after a blogger who was beaten to death by the secret police in Alexandria in June 2010

​​To those who call him a hero, however, Ghonim had a message: "We Egyptians love heroes, but I am really not a hero! I spent 12 days sleeping. The heroes are the young people who went out on the streets, who took part in the demonstrations, who sacrificed their lives, who were beaten and arrested, who risked their lives, and put themselves in danger."

Ghonim said he was opposed to any negotiations with the current government as long as Mubarak was in power. In the interview, he urged the demonstrators not to give up, telling Egyptian youth: "this is your country."

The 30-year-old Facebook activist and father of two is a marketing manager for Google for the Middle East and North Africa. He has been politically active for a year. Under the pseudonym Al-Shahid, Arabic for martyr, he called for protests against the repressive regime, becoming one of the resistance movement's main initiators.

His Facebook page "We are all Khaled Said" plays a key role in the movement. The page is named after a blogger who was beaten to death by the secret police in Alexandria in June 2010. He says he had no idea that his site and Internet campaign would set off such an intense political reaction among democracy advocates. 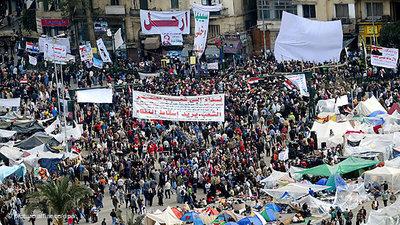 Hundreds of thousands of people cheered him on when he spoke to protestors in Tahrir Square; Ghonim's message to the young people of Egypt was simple and straightforward: "This is your country"

​​Ghonim seems to have accepted the mantle of his new role. He urged young demonstrators and established opposition parties to agree to joint political demands. On a recently created Facebook page, he got more than 150,000 votes within 24 hours, to be "spokesman" for the Egyptian protest movement.

Already, Ghonim is an important symbolic figure. He is popular, he gets people excited about his cause, and his emotional television appearances lent him a very human element, bringing him a lot of public sympathy.

Whether or not he can lead a multifaceted mass movement, and whether he can hold his own in political power struggles, has yet to be determined. In any case, he seems to have the fighting spirit necessary for the job.

Egypt after Mubarak
"An Era in which Freedom and Human Rights are Respected"
After the overthrow of Hosni Mubarak, there are plans to hold elections in Egypt within six months. The people of Cairo are proud of what their protests have achieved and at the same time exhausted by the experience. Khalid El Kaoutit reports from Cairo

Egypt after Mubarak
Those Who Preach Democracy …
The moment of truth has come for everyone in Egypt. While the country's major problems have not been solved by Mubarak's resignation, the revolution that began on Tahrir Square could mark the dawning of a new era. According to Rudolph Chimelli, however, the West must be more consistent in its support for the new democracy in the Middle East

Hosni Mubarak's Resignation
Pharaoh KO
We are experiencing a key moment in world history, in the light of which the events in Tunisia – as vital as they were for the Egyptian revolution – seem like a mere overture, writes Stefan Weidner

END_OF_DOCUMENT_TOKEN_TO_BE_REPLACED
Social media
and networks
Subscribe to our
newsletter