Hemmed in on All Sides

Given rising tension with Israel and possible indictments of its operatives by the international tribunal investigating the assassination of former Prime Minister Rafic al-Hariri, Lebanon's powerful Shia political and paramilitary organization has never looked more uncertain. By Paul Salem 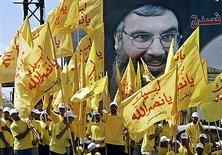 ​​ The most immediate question concerns the possibility of another Israel-Hezbollah war, fears of which have mounted throughout this year, fuelled by reports of new missile transfers to Hezbollah and intermittent threats from Israel. Those who foresee war argue that Israel is unwilling to tolerate a heavily armed Iranian proxy on its border while tensions with Iran over the nuclear issue remain unresolved.

Although war is unlikely in the coming months, if sanctions on Iran don't bear fruit by early 2011, Israel might feel the need to act. If it launched military strikes on Iran's nuclear installations, Hezbollah would likely join the fray and Israel would have to engage Hezbollah at the same time. Alternatively, Israel might launch a pre-emptive war against Hezbollah in order to rob Iran of a nearby retaliatory capacity.

Arab-Israeli peace as a distinct possibility?

Hezbollah is preparing intensively for such scenarios, building defenses, digging tunnels, and assembling a powerful missile arsenal. But, although Hezbollah's preparations are likely to ensure its survival, it would be hard-pressed to justify to the Lebanese public a strategy that led to two ruinous wars in the span of five years. 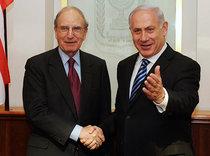 In exchange for giving back the occupied Golan Heights, Israel and the US will insist on the disarmament of Hezbollah. Pictured: Israeli prime minister Benjamin Netanjahu and US Special Envoy George Mitchell

​​ In the end game of such a war, Syria might be asked by the Arab countries and the international community to take greater responsibility in Lebanon, in order to contain Hezbollah and its military profile.

Moreover, if peace prevents a slide into war, Hezbollah has another problem. Although a real breakthrough in the Arab-Israeli peace process appears unlikely, United States envoy George Mitchell is still talking of Arab-Israeli peace as a distinct possibility in 2011. Sources within the US administration hint that President Barack Obama might announce the outlines of an Arab-Israeli settlement sometime later this year.

Security of "all states in the region"

An accord between Syria and Israel is a key element of all proposed scenarios for Arab-Israeli peace. In exchange for giving back the occupied Golan Heights, Israel and the US will insist on the disarmament of Hezbollah. Indeed, within the context of the Arab Peace Plan, announced in Beirut in 2002, the Arab states take it upon themselves to ensure the security of "all states in the region" – code words for dealing with the threats from Hezbollah and Hamas – since the region includes Israel.

Hezbollah is an Islamist political and paramilitary organisation; it is also a major provider of social services, which operate schools, hospitals, and agricultural services for thousands of Lebanese Shi'a

​​ Although both Hezbollah and Iran still argue, perhaps correctly, that Israel will not give back the Golan Heights or allow the emergence of a Palestinian state, the possibility of peace cannot be ruled out. If it does occur, Syria will push Lebanon into a peace treaty with Israel and lean on Hezbollah heavily to adjust to the new realities.

Given its popularity among Lebanese Shia, Hezbollah could continue as an influential political party, but it would have to abandon its role as a major proxy force for Iran's Revolutionary Guards. Nevertheless, Hezbollah faces severe political trouble, too. Although no official announcement has been made, there are reports that Daniel Bellemare, the prosecutor for the Special Tribunal for Lebanon, might conclude his investigation and issue indictments in the fall.

An Israeli plot to undermine the Islamic resistance? 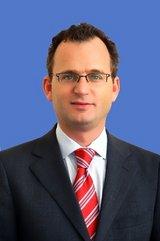 ​​ In a speech on July 16, Hezbollah leader Sheikh Hassan Nasrallah acknowledged rumours that the Tribunal might indict members of his party, but charged that the Tribunal was part of an Israeli plot to undermine the Islamic resistance in Lebanon and has no credibility. He argued that the indictments would probably be based on cell-phone records, and that Israeli agents had penetrated the Lebanese cell-phone network. Indeed, the Lebanese authorities recently arrested a high-level official at one of the country's two cell-phone companies, alleging that he was an Israeli agent.

In describing the tribunal as part of an Israeli plot, Nasrallah warned the government and other parties in Lebanon against cooperating with it, or accepting its verdicts. He reminded his audience of the street fighting in Beirut in May 2008, and made clear that Hezbollah would not shy away from another fight if necessary.

While Hezbollah has tried to convince other Lebanese that its presence helps maintain the country's security and stability, regional and international developments suggest that it faces mounting challenges. And, although the future does not look bright for Hezbollah, it is not likely to relinquish its power without a fight.

An International Force for Lebanon?
No Sustainable Stabilisation Without a Political Conflict Settlement
A stabilisation force only makes sense under certain conditions. For a start, all regional actors and their legitimate interests will have to be taken seriously, writes Muriel Asseburg in her analysis

Interview with Hussam Itani
Trying to Find a Common Denominator
After the murder of Rafik al-Hariri in February 2005 the old coalition between the fractions al-Hariri, Walid Jumblat, and Syria broke down. Mona Sarkis interviewed Hussam Itani, a columnist for the Lebanese newspaper As-Safir, about the new alliances

On the Death of the Grand Ayatollah Fadlallah
"Religion Serves the People"
The most senior Shiite cleric in Lebanon, Grand Ayatollah Fadlallah, has died. The intellectual guiding force of the Shiite Hezbollah movement in Lebanon, Fadlallah supported the armed fight against Israel but condemned Islamic terrorism. He also worked for the peaceful coexistence of the different denominations in Lebanon. This portrait by Stephan Rosiny

Protests in Lebanon against Religious Influence
The Confessional System in the Dock
More than 3,000 Lebanese took part in a demonstration in Beirut last weekend against the influence of religion on politics, an influence that they believe represents a long-term threat to internal peace in Lebanon. Details from Birgit Kaspar

END_OF_DOCUMENT_TOKEN_TO_BE_REPLACED
Social media
and networks
Subscribe to our
newsletter