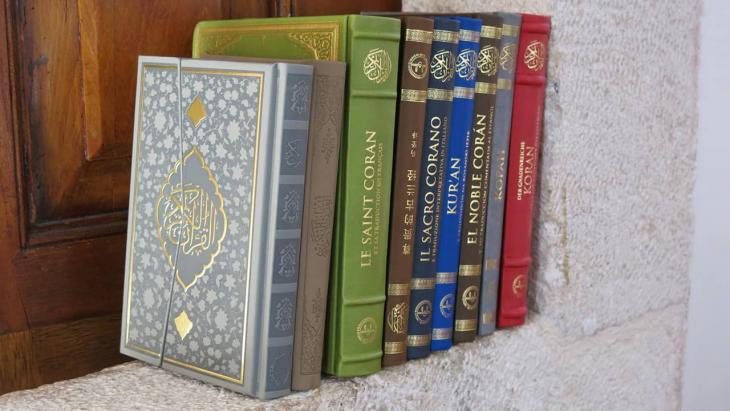 The Global Qur'an
Searching the suras

Research project "The Global Qur'an", brainchild of Professor of Islamic Studies Johanna Pink and sponsored by the European Research Council, analyses the history and dissemination of Koran translations while examining the role of nation-states and missionary movements. By Arnfried Schenk

A single word, written over a thousand years ago, wound up ending a promising political career in Indonesia in 2017. Basuki Purnama was sentenced to two years in prison. His crime, according to his accusers: insulting Islam.

What Purnama said during his campaign for governor of Jakarta, capital of the most populous Muslim country in the world, sounds harmless on the surface: that the Koran does not forbid Muslims from voting for non-Muslims in elections. Anyone who claimed otherwise would be misinterpreting the Koran, he explained. Purnama is a Christian.

The hardliners reacted to this statement by organising mass demonstrations and filing a suit against Purnama. The judges deemed their plea, which referenced Sura 5, verse 51 of the Koran, to be justified and the verse landed the ex-governor in jail. More precisely, it was the translation into Indonesian of "O believers! Take neither Jews nor Christians as leaders".

For Johanna Pink, Professor of Islamic Studies at the University of Freiburg, this incident is a prime example of the relevance of her research subject: Muslim translations of the Koran, a field that has to date seen little research.

Now the European Research Council is supporting Pink's project with a Consolidator Grant. Offering a total of two million euros over five years, this is one of the most prestigious academic grants awarded in Europe. With the help of her colleagues, Pink is analysing the history and dissemination of Koran translations while examining the role played by nation-states such as Saudi Arabia and Turkey, and also the influence of missionary movements. "The translation of the Koran has become a matter of nation-state interests," Pink says.

Her research project is titled "The Global Qur'an", and her international team includes half a dozen doctoral students and postdocs. Each is responsible for a separate area. Together with Pink, they browse through translations of the Koran into Indonesian, Turkish, Slavic languages, French, English and German. Going through the text verse by verse, they communicate daily via Telegram, sometimes across continents; regularly meet in the Freiburg seminar; and exchange views on tricky passages. In the process, they are discovering how theological debates on interpretation reverberate in the translations: what rights do women have? What status do people of other faiths have in Muslim societies?

Browsing through translations of the Koran into Indonesian, Turkish, Slavic languages, French, English and German, the international team at The Global Qur'an go through the text verse by verse. Communicating daily via Telegram, sometimes across continents, they are discovering how theological debates on interpretation reverberate in the translations: what rights do women have? What status do people of other faiths have in Muslim societies?

The Arabic term "awliya", for example, which was the Indonesian politician's undoing, is ambiguous and can be translated in various ways. "Helper" or "ally" is a common reading, but the Indonesian translators chose the word "leader" instead. That version of the Koran was first published towards the end of the colonial period and is still in circulation today. The interpretation was deliberately directed against the Dutch colonial rulers and was to be understood as a prohibition on cooperating with them, says Johanna Pink.

In addition to translations, the 47-year-old Islamic scholar's research also focuses on Koranic exegesis and the modern history of Egypt. Rather than hiding away in the library, Pink occasionally appears in the media, for example to try to objectify headscarf debates based on Koranic texts or dissect a "certain book" by Thilo Sarrazin with both passion and expertise.

She remembers the first time she read the Koran as being quite trying. It was the standard German translation by the orientalist Rudi Paret. "I had the stupid idea of just reading it from beginning to end. But I soon got stuck."

By now she knows the book well, not by heart like some Muslims, but for that in several languages: Arabic, Persian, Turkish, Indonesian, Javanese, Russian, French ... the list goes on. Learning languages simply inspires her, Pink says dryly. Moreover: "If you're primarily concerned with the interpretation of the text rather than literary aspects, you don't have to have a perfect command of every language to recognise the choices a translator made at any given point."

Since returning to power in Afghanistan, the Taliban have steadily eroded the rights and opportunities of women and girls, particularly their access to education. But Afghans are ... END_OF_DOCUMENT_TOKEN_TO_BE_REPLACED

The book "The Invention of the Maghreb: between Africa and the Middle East" prompts us to review basic terminology. This includes terms that we use almost every day as if they are ... END_OF_DOCUMENT_TOKEN_TO_BE_REPLACED

Tunisia has been going through a severe economic and political crisis in recent years. More than one in three young people there are unemployed. For many skilled, qualified and ... END_OF_DOCUMENT_TOKEN_TO_BE_REPLACED

At the end of every year, the team at Qantara.de gives you a run-down of the ten most-read articles on the site over the past 12 months. Here is a quick overview of the stories ... END_OF_DOCUMENT_TOKEN_TO_BE_REPLACED

The government in the Netherlands, one of the last European nations to abolish slavery, has made an historic apology. But some feel that there is still a long way to go. By Ella ... END_OF_DOCUMENT_TOKEN_TO_BE_REPLACED

To celebrate the bicentenary of the deciphering of the Rosetta Stone, the British Museum is running an exhibition entitled "Hieroglyphs: unlocking ancient Egypt" until February ... END_OF_DOCUMENT_TOKEN_TO_BE_REPLACED
Author:
Arnfried Schenk
Date:
Mail:
Send via mail

END_OF_DOCUMENT_TOKEN_TO_BE_REPLACED
Social media
and networks
Subscribe to our
newsletter