The Gnawa Festival in Essaouira
High on Spirits

Ever since the 1960s, Morocco has been a magnet for musicians from around the world, experimenting with music that crosses all kinds of boundaries. The Gnawa Festival in Essaouira is very much part of this tradition. Andreas Kirchgäßner took a look around this year's event 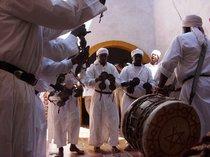 Where diverse cultures and musical genres meet: the Gnawa Festival in the Moroccan port of Essaouira

​​ There are some who say the Gnawa Festival in Essaouira has grown into the largest music festival on the African continent. One thing's for sure – it would be hard to find another festival so devoted to blends, fusions and crossing musical boundaries anywhere else in the world.

For four days and nights, every conceivable type of music of African origin is united with the evocative music of the Gnawa, the descendants of black slaves from West Africa – on magnificently decorated stages outside the town's walls, in small venues in the heart of the town and on two beach stages.

From far and wide, the sound of the gnawa musicians echoes through the town. The master musician provides the basic melody on a three-string bass lute, underlain by his dancers' rhythmic iron castanets. He raises his smoky voice, calling to particular spirits through ritual lyrics, and his musicians repeat the refrain.

On top of this beautiful backdrop, jazz, funk, ethno and even techno musicians from around the globe improvise their own sounds. A tradition going way back to the 1960s, when the jazz pianist Randy Weston discovered the gwana trance music. Later, when Morocco became the destination of choice for dropouts and hippies in the 1970s, Jimi Hendrix came. In his footsteps followed Cat Stevens, Bob Marley, Peter Gabriel, Carlos Santana and many more.

The big name on this year's line-up is the "king of rai", Algerian Cheb Khaled. He was invited by the guest conductor of German radio's WDR Big Band, Michael Gibbs. At a press conference, Gibbs perches on a Moroccan cushion and explains how the Algerian drummer Karim Ziad managed to persuade Cheb Khaled to work on a fusion set with Hamid El Kasri's gnawa group.

Fear of the Gnawa spirits? 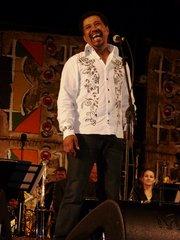 A name whispered in ancient alleys: Cheb Khaled, "king of rai" and "flag kicker" in Essaouira

​​ A Moroccan journalist puts a mean question – isn't his band scared of the Gnawa spirits? Gibbs sidesteps neatly, summoning up the "esprit" of all good music that touches its listeners whether they understand it or not. A nice answer, prompting benevolent applause.

Cheb Khaled is the talk of the town, his name whispered in the ancient alleys along with that of Hamid El Kasri, the gnawa master from Rabat. Gnawa music is cult in Morocco, almost on a par with rai or European pop.

I crisscross the town in search of the small stages and squares where bands played for free in past years. There could hardly be a better setting for the festival than the picturesque port town of Essaouira. Once Morocco's first trading centre, it linked the caravans from Timbuktu with the maritime trading lines to Europe and the new world. From Africa came ivory, gold dust and ostrich feathers – and also slaves, who founded the Sufi brotherhood of the Gnawa in this cultural melting pot.

Spirits of many religions

To this day, the Gnawa are considered healers, in contact with the spirits that cause sickness. They know black African, Berber, Muslim, Jewish and even occasional Christian spirits. 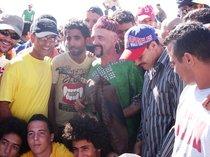 ​​ I meet an old acquaintance in the town's well preserved fortress, a man who set out from Munich to build musical bridges long before the guest conductor Michael Gibbs: the bagpipes player Thomas Gundermann. The festival has been his stomping ground for years, and in 2006 he played with the gnawa group headed by Abdellah Guinea, a brother of the most famous gnawa master Mahmoud Guinea.

He has also performed with the young master Said Boulhimas, tipped as the next big thing in gnawa a few years ago, and with fusion groups such as Bleu Mogador and Ganga-Fusion.

But things aren't looking good for him this year. Abdellah hasn't got a slot and Said has fallen out with everyone. Only Bleu Mogador are performing this time around, but they've just got back from Bordeaux, so there's no time to practise together. Thomas doesn't let it get him down, not even when he has to play unplugged at his only official appearance, his bagpipes drowned out. An eternal optimist, he keeps on jamming away on the town's streets in impromptu formations.

Musical communication across all boundaries

Thomas is a natural, a born improviser. And improvisation, musical listening and speaking across all boundaries, is what prompts him to keep coming back here. The audience is more than appreciative, talking to him wherever he goes, having their photos taken with him, gathering and waiting for him to play again.

Meanwhile the godfather of gnawa, Mahmoud Guinea, is appearing on the big stage. His musicians in bright red, green and yellow robes, he himself clad in white, he entrances his huge audience from the very outset. He's playing on home territory of course, especially as the Brazilian-German group accompanying him, Afoxé, has close ties to Candomblé, an Afro-Brazilian religion related to Gnawa. 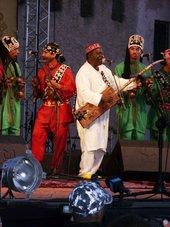 Reminiscences of south of the Sahara: Maâlem Mahmoud Guinea, the godfather of modern gnawa music

​​ Mahmoud hardly has to adapt to the drummers, singers and dancers. His musicians step up to the front of stage one after another, dancing casual figures that tell of hunting and the old homelands south of the Sahara. Next up are the French electro-jazz group Sixun, who stage brilliantly complex arrangements but leave the audience cold. Too intellectual, not enough groove.

I set out for a midnight trance ceremony in the Gnawa shrine. This year, tickets are so exorbitant that I find myself sandwiched between other Europeans and rich Moroccans. The only people who stand out are the building's inhabitants.

Like many Gnawa they are among the poorest people of Essaouira. The women are sturdy and wonderfully vulgar, the men thin and pale like the gnawa master of the evening, Allal Soudani. I once interviewed him in 2004, a permanently smouldering joint between his fingers. He has got greyer, but his group captivates us with its bright colours and stunning vocals. 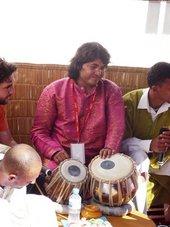 ​​ Coloured cloths are thrown over the dancers. Each colour addresses a particular spirit, appeasing it. Colour by colour, spirit by spirit, we are entranced through the night. A skinny young man dances until he sinks to his knees under a particular colour. In his trance he appeases the spirit that has beset his soul. This is psychotherapy, African-style.

The genteel audience is amazed at the spirit woman Lala Mira, who is hooked on perfume and sprinkles us with it until she starts drinking from the bottle in her ecstasy. All too soon comes the dancer of Sidi Hamou, dancing with his knife. And then the lights go out and an incredibly voluminous woman makes an entrance with a bundle of burning candles: Lala Malika. She washes her arms and her face in the flames. Flickering in the light, the dancer looks like a spirit herself.

The ceremony comes to an end after two hours. The Europeans are ecstatic but the Moroccans break out in protest: a Lila usually lasts at least five or six hours. They've been robbed!

The next day's sensation is the Indian tabla player Amrat Hussain with his trio, a French electric guitarist and a bassist – a fairly unusual mixture as it is. Hussain shares a stage with Foulane, emulating his hero Jimi Hendrix on a traditional Berber violin, and the very mobile gnawa master Abderrahim Benthami. All boundaries dissolve in the music, India and jazz and Berber fuse with gnawa, becoming gnawa and yet also something new, something never heard before.

Amrat Hussain explains his "recipe": the tabla not only looks like an electric hob – you really can cook up international dishes on it. 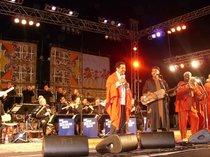 "Shackled to their printed sheets": The WDR Big Band is considered one of the world's best Jazz orchestras; in Essaouira, however, they present a stiff performance

​​ The beautiful Babani Kone, a star at home in Mali, sings familiar sounds – unlike Solo Cissokho from Senegal. He fuses the strings of his Malian kora with Tyour Gnaoua and the Musiciens de Jouala from Agadir, playing their African melange into the early hours.

Bab Marrakech, the large square outside the gates of Essaouira, fills up early on. It is impossible to find a good place among the masses of visitors. To my delight, a Moroccan television editor wangles me a spot in front of the stage, eye to eye with the musicians. Gibbs has arranged traditional gnawa pieces for his big band, banishing the improvised phrases onto paper.

The gnawa master Hamid El Kasri starts the ball rolling and countless voices join his, a game of call and response, every sound, every beat, every word a familiar friend. The audience surges like an ocean, girls swinging their long hair at the front. On stage El Kasri's dancers whirl, and behind them sits the WDR Big Band with their sheet music.

Admittedly it is after midnight, the witching hour when the spirits come out. But the spirits could hardly be more different. The orchestra gives a colourless, stiff performance, shackled to their printed sheets. In an orderly fashion, one brass musician after another step up for their solos, receive their restrained applause and sit back down again. 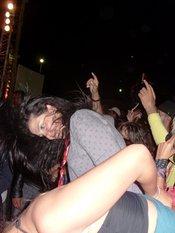 ​​All eyes are fixed on El Kasri anyway – and then, summoned up by enthusiastic chants, Khaled is suddenly on stage. The girls squeal and throw scarves towards him, a huge collective roar and scream surging through the sea of faces. Thankfully, there is no alcohol involved here.

Slight smiles flicker across the faces of the WDR band members, and then they play a perfectly competent set. They're not bad, no – the majority are experienced musicians with solo careers behind them. Yet they seem bizarrely out of place alongside the Gnawa. And alongside the Algerian Khaled, who knocks over the Moroccan flag – a nod at the political tensions between Algeria and Morocco – telling his adoring fans: it's not about what nation you belong to, it's about the spirit you live by.

Young men try in vain to calm their scantily clad sisters as they completely flip out. All the dams have burst and the ghosts of the WDR Big Band are soon forgotten.

The next evening finds me sitting in front of the television. At prime time, Moroccan TV features Thomas Gundermann, a wonderful and lengthy portrait of the man from Munich they now call "maâlem", Master Thomas. A small honour for this modest musician who has gradually been walking a thorny path to the African spirits.

END_OF_DOCUMENT_TOKEN_TO_BE_REPLACED
Social media
and networks
Subscribe to our
newsletter