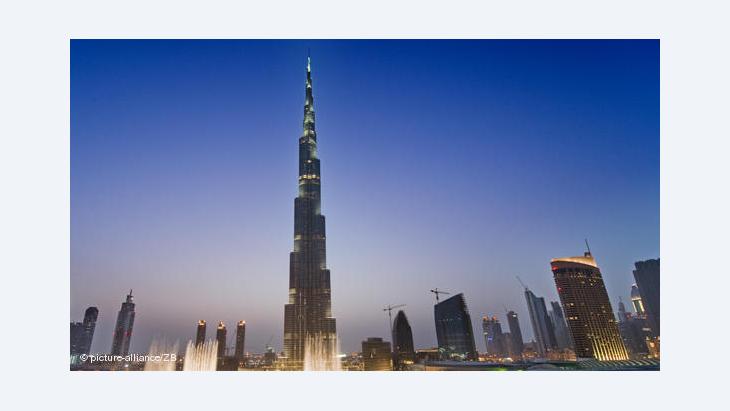 The Gulf States
A Hypermodern Centre of the Modern Global Economy

﻿While in the traditional core countries of the Arab World people are rising up against stagnation, the Gulf is busy showcasing itself as the spearhead of modernisation. In his new book, Rainer Hermann writes that the Gulf States demonstrate what Arabs can accomplish when given the necessary freedom

The United Arab Emirates and the small states on the Gulf have long been disdained by the rest of the Arab World as a cultureless periphery. The other Arabs haughtily looked down on their nouveau riche cousins on the Arabian peninsula. Now, however, the seven principalities that united in 1971 to form the United Arab Emirates have entered the modern world with a vengeance, leaving the cultural centres of the "old Arabia" far behind them.

In terms of economic heft and political significance, the young city-states of Dubai, Abu Dhabi, Kuwait and Qatar have long since outstripped the one-time power centres Egypt, Syria and Iraq. 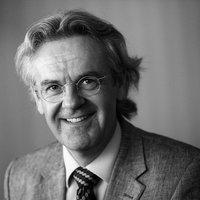 Sober analysis: Rainer Hermann describes in detail both the accomplishments and the downsides of the rise of the Gulf States

​​The former core regions of the Arab World, while still representing a grand history, cannot exactly boast a dynamic present. It is this contrast between the "old" and the "new" Arabia that provided Rainer Hermann with the framework for his book about the Gulf States ("The Gulf States – What's Next for the New Arabia?").

This is not one of those quickly turned-out works on the Arab Spring that publishers are busy tossing onto the market. On the contrary: it is thoroughly researched and the result of the many years Hermann has spent working as a correspondent, including reporting from Abu Dhabi for the Frankfurter Allgemeine Zeitung since 2008.

But of course Hermann couldn't simply skip over the "Arabellion" completely, which is why his first chapter makes the connection to the Arab protest movements.

Quantum leap in a single generation

While in the traditional core countries of the Arab World people are rising up against stagnation and antiquated structures, the Gulf is busy showcasing itself as the spearhead of modernisation. With the exception of Bahrain, the protest movement has practically passed by the Gulf States without a trace. The media there by contrast, such as Al Jazeera, which broadcasts from the small state of Qatar, have become the mouthpiece of the revolution, even though Qatar itself is not under democratic rule.

Knowledgeably and in great detail, Hermann recounts how the Gulf rose from a Bedouin nation to become a hypermodern centre of the modern global economy. In a single generation, the inhabitants of the Gulf have taken a quantum leap unrivalled anywhere in the world. A scholar on Islam and economist, Hermann explains how this success story could come about, bringing together a number of different facets from areas such as urban planning, culture, ecology, society and history.

The reader learns of the health problems brought by the Gulf Arabs' new wealth, and of the real-estate bubble in Dubai.

Dubai in particular has proved to be a driving force in the Emirates. For Hermann, that city has become synonymous with what Arabs can accomplish when given the necessary freedom. Often scoffed at as a kind of "Disneyland", the metropolis has in the meantime attained the status of an Arab dreamland, just as America was once the yearned-for destination for so many Europeans in the 19th century.

Success as the result of strategic planning

A symbiosis between capitalism and Islam has taken root here that Hermann marvels at, without however neglecting to tell of its darker sides and contradictions. Unlike other oil-producing countries, such as Libya, the Gulf States have succeeded in investing their revenues from the lucrative petroleum business into the long-term development of economy and society. 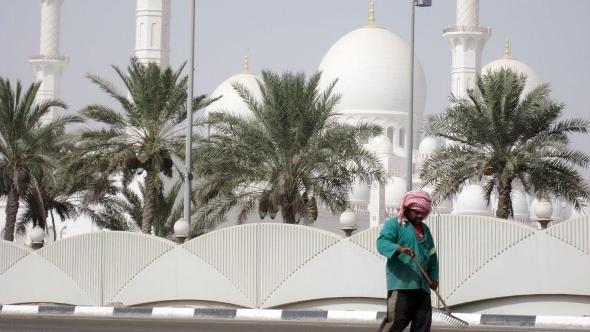 "Dubai has attained the status of an Arab dreamland, just as America was once the yearned-for destination for so many Europeans in the 19th century." Pictured: the Sheikh Zayed Grand Mosque in Dubai

​​For the FAZ journalist, Dubai's ascent as metropolis is the result of strate¬gic planning and foresight on the part of the ruling family. Thanks to targeted investments in logistics, infrastructure, real estate and financial services, the city has developed into an international hub for trade between Europe and Asia.

This can be attributed not least to the pragmatic understanding of Islam that still characterises the Gulf States today, although outward forms of piety have taken on greater importance. Hermann explains this contradiction by pointing out that Islamic preachers never played a significant role in Bedouin society.

People were often unable to afford them, and they were not highly respected. An important achievement on the Gulf is therefore an open society – something greatly valued by Arabs in other countries. Dubai especially has become a codeword for freedom and the fulfilment of personal dreams, more reminiscent of America than of the Arab World.

The "ideal case of globalisation

The key feature of Dubai is its ambiguity – its lack of a concrete identity, of local ties, of authenticity. Dubai could be anywhere; the city is the "ideal case of globalisation". At the same time, though, it is a prime example of ecological madness, with indoor ski slopes despite an outdoor temperature of forty degrees. In environmental terms, the Emirates live beyond their means in a way unparalleled anywhere in the world.

In 2010 the World Wildlife Fund (WWF) awarded Abu Dhabi the dubious distinction of having the world's biggest "ecological footprint". The "footprint" estimates how much land and ocean area an individual or country needs to sustain the current standard of living in the long term. Abu Dhabi's ecological showpiece project Masdar City doesn't really help much here, because it can hardly compensate for a rate of water and energy wastage known otherwise only in the USA. 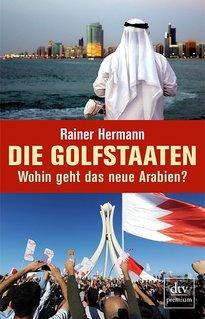 Facts and context: cover of Rainer Hermann's book on the Gulf States

​​Hermann hence describes in detail both the accomplishments and the downsides of the rise of the Gulf States; he cogently arranges the facts and explains the contexts, but generally refrains from commentary. And that is exactly what makes his book so worth reading.

With the exception of Bahrain, the Arab protest movement has almost entirely passed over the Gulf States up to now. Demonstrators in Oman were arrested, but otherwise little resistance has sprung up. In Qatar there wasn't even a petition against the ruling house of Al Thani, let alone a demonstration. This is due not only to the great prosperity of the region, but also to better government, embracing a policy of modernisation from above.

However, neither a true division of powers nor extensive press freedom exist here. In March 2011, political prisoners were taken in the Emirates for the first time; we unfortunately have yet to learn what became of them. Nevertheless, in the year of the Arab protests, the centre of gravity in the Middle East shifted further towards the Gulf, where in particular the small state of Qatar is now among the foreign-policy heavyweights.

Qatar, for Hermann an "Al Thani family show", assumed a leading role in the mobilisation of the community of states against Qaddafi. In the present expressions of international concern about the conflict in Syria, Qatar however plays more of a dubious role. Whether or not the Emir has taken on more than he can handle in Syria remains to be seen. Hermann's book on the Gulf States is required reading for anyone interested in political developments on the Gulf and their background.

Home
Print
Newsletter
More on this topic
Cultural Change in Oman: From Camels to ClassicsAl Jazeera and Qatar: Accessories of the Arab SpringNervousness in the Gulf: Carrot and Stick Diplomacy
Related Topics
Arab Spring, Arabellion, Democracy and civil society
All Topics

In Doha, Arabs from Morocco, Tunisia, Egypt and Algeria are gathering to celebrate the first ever FIFA World Cup to be held on Arab soil. The criticism from Europe? Over the top, ... END_OF_DOCUMENT_TOKEN_TO_BE_REPLACED

Lamya Kaddor, MP for Germany’s Green Party, visited Qatar with a group of parliamentarians. In interview with Claudia Mende, she advocates a differentiated picture and urges that ... END_OF_DOCUMENT_TOKEN_TO_BE_REPLACED

"Rebel Game: The Power of Football in the Middle East and the Qatar World Cup", an anthology published by Middle East researchers Jan Busse and Rene Wildangel, takes the upcoming ... END_OF_DOCUMENT_TOKEN_TO_BE_REPLACED

After a two-year hiatus, the Arab League re-convened at the beginning of November in Algiers against a backdrop of uncertainty and discord. By Pierre Boussel END_OF_DOCUMENT_TOKEN_TO_BE_REPLACED

Germany needs a strategy when brokering deals with countries like Qatar, Saudi Arabia or the United Arab Emirates that allows it to maintain its own moral compass. By Sebastian ... END_OF_DOCUMENT_TOKEN_TO_BE_REPLACED 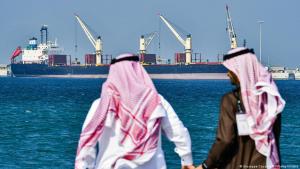 Saudi Arabia is using its oil wealth to invest huge sums in other countries, apparently to diversify its own economy. Critics are concerned that the build-up of financial muscle ... END_OF_DOCUMENT_TOKEN_TO_BE_REPLACED
Author:
Claudia Mende
Date:
Mail:
Send via mail

END_OF_DOCUMENT_TOKEN_TO_BE_REPLACED
Social media
and networks
Subscribe to our
newsletter