In Morocco, the High Atlas Foundation is running a pro-poor agro-forestry programme that aims to improve people’s livelihoods as well as the health of the natural environment. The key to success is the participatory approach that empowers marginalised villagers to take their fate into their own hands. By Kerstin Opfer

Natural landscapes are deteriorating worldwide. Approximately 30 % of the world’s natural forests are expected to be lost by the end of this century. Furthermore, 25 % of all land on earth is currently threatened by desertification. The implications are severe soil erosion, reduced agricultural productivity, food insecurity and the dwindling of biodiversity.

Morocco is no exception. Over 90 % of Morocco’s historical forest cover has already been destroyed. The reasons are overexploitation, overgrazing and the worsening climate. The disastrous extent of Morocco’s environmental degradation puts the country’s flora and fauna at risk. Over 223 plant and animal species in Morocco are endangered, according to the Red List of the International Union for the Conservation of Nature (IUCN), the umbrella organisation of government agencies and non-governmental organisations.

Severe erosion, water run-off, floods and soil depletion have a grave impact on human well-being too. That is particularly true in the Atlas region, where communities’ livelihoods depend on natural resources. The people concerned are socially marginalised and live in systemic poverty.

In this stressful scenario, environmental conservation is an important development issue. The political objective must be to mitigate all destructive trends. Accordingly, a wide range of projects has been started to provide communities with the twin goals of giving them control over their natural resources and generating socio-economic benefits. However, it can be challenging to tackle environmental and societal issues at once. Many projects have failed to achieve either their conservation or their developmental goals – and some have not achieved either. 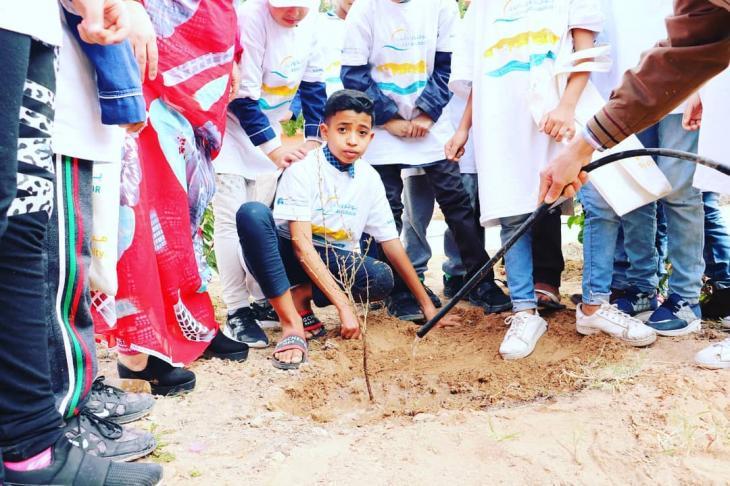 Since 2003, HAF has planted 3.6 million seeds and trees. A strong increase occurred in 2018. The reason was that four new nurseries were established in partnership with Morocco’s High Commission of Water and Forests and Ecosia, a social business based in Berlin. The High Atlas Foundationʹs programme has proven that meaningful community engagement through participatory methods is essential to sustainable, long-term success

It is therefore essential to identify effective practices and share the lessons learned. The High Atlas Foundation (HAF), a non-profit organisation that is registered in Morocco and the USA, runs a pro-poor agroforestry programme in the North African country. I assessed it, on behalf of the HAF, using a new methodology that allowed me to analyse the links between conservation management and community intervention, as well as what they mean in terms of poverty reduction and biodiversity improvements.

My work included the desk-based review of relevant documents, 34 interviews plus discussions with six focus groups. Using this data a group of independent professionals scored the performance of the programme, determining which practices were successful, identifying gaps and giving recommendations for further improvement. The evaluation revealed that the programme was highly effective and should serve as an international model.

Helping people to help themselves

Since 2003, HAF has planted 3.6 million seeds and trees. A strong increase occurred in 2018. The reason was that four new nurseries were established in partnership with Morocco’s High Commission of Water and Forests and Ecosia, a social business based in Berlin.

One successful intervention was to distribute fruit trees. As a result, subsistence farms that cultivated barley and corn started to sell surplus organic fruit, considerably improving peopleʹs livelihoods. There are environmental benefits too as the trees reduce both soil erosion and flooding. The cultivation of fruit trees thus helps to preserve the natural environment.

Research project "The Global Qur'an", brainchild of Professor of Islamic Studies Johanna Pink and sponsored by the European Research Council, analyses the history and ... END_OF_DOCUMENT_TOKEN_TO_BE_REPLACED

Arab youth express their hopes and wishes for the New Year, spanning everything from civil and political rights, to education, to arts and culture. By Rafiah Al Talei END_OF_DOCUMENT_TOKEN_TO_BE_REPLACED

Her grandparents are Jews – born in Tunisia and Algeria. Director Cleo Cohen has now broken the silence about this with a very personal debut. By Nadine Wojcik END_OF_DOCUMENT_TOKEN_TO_BE_REPLACED

Moncef Marzouki was Tunisia's first democratically elected president after the fall of dictator Ben Ali. Today he is the most prominent critic of increasingly counter- ... END_OF_DOCUMENT_TOKEN_TO_BE_REPLACED

Asef Bayat, professor of Sociology at the University of Illinois, Urbana-Champaign, has been studying revolutions and how they affect people since 1979. In his recent book, " ... END_OF_DOCUMENT_TOKEN_TO_BE_REPLACED

Every year in December, the team at Qantara.de takes a look back at the articles that proved most popular with our readers. This year is no different. Here is a run-down of the ... END_OF_DOCUMENT_TOKEN_TO_BE_REPLACED
Author:
Kerstin Opfer
Date:
Mail:
Send via mail

END_OF_DOCUMENT_TOKEN_TO_BE_REPLACED
Social media
and networks
Subscribe to our
newsletter