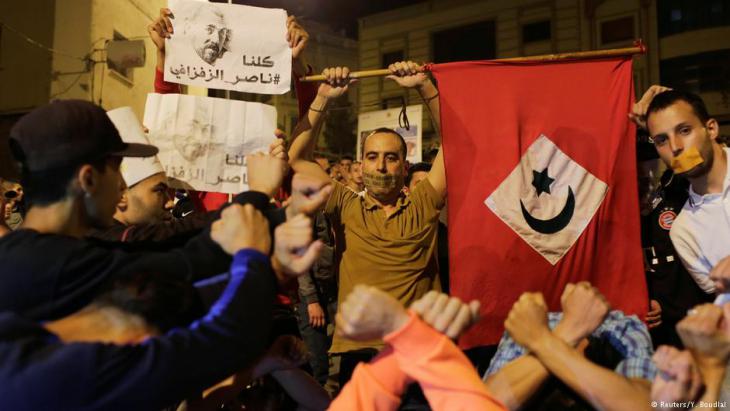 The uprising of the marginalised

For several weeks now, clashes have been raging in Morocco between the nation's security forces and members of a new protest movement, "Hirak El-Shaabi", which is calling for autonomy, social justice and the release of political prisoners in the north African country. By Mohamed Lamrabet

The well-known activist and regime critic Nasser Zefzafi was arrested in Al-Hoceima in northern Morocco on 29 May. Since then, barely a day goes by without a demonstration of some kind. The authorities are accusing the 37-year-old de facto leader of a series of protests lasting more than seven months in the structurally weak Rif region of having prevented free religious worship in a mosque. He had vehemently contradicted the imam during Friday prayers, after the imam accused the protesters of wanting to divide the nation.

The wave of protests began last October following the death of Mohsin Fikri. Police officers had confiscated the fishmonger's catch and thrown it into a rubbish truck. When Fikri jumped into the truck to save his catch, one of the officers allegedly called out: "Than mu" ("crush his mother"). Fikri was crushed to death and triggered the largest series of demonstrations since those that set off the Arab Spring in 2011.

Although the protests have since abated, the mobilisation within Moroccan civil society has continued. In public grass roots debates, a political programme was developed that includes demands for general social services such as education and medical care, as well as the release of political prisoners. The protest wave has now grown into a "popular movement" far beyond the Rif region. It is called "Hirak El-Shaabi" (which literally means "Popular Movement") and is evidence of a widespread awareness of the issues of political empowerment and cultural identity in Morocco. 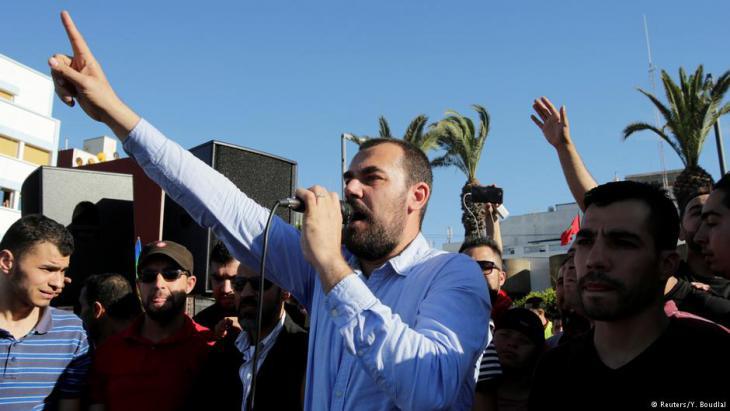 An icon of the resistance against social injustice and political despotism: 39-year-old Nasser Zefzafi became the face and the figurehead of Morocco's "Hirak El-Shaabi" (Popular Movement) in recent months. The movement and its supporters are protesting against poor health care provision and corruption in the Rif region, which is mainly populated by Berbers. Zefzafi was arrested on 29 May. Ever since, his supporters have been protesting on an almost daily basis for his release

A history of protest in the Rif

It is no coincidence that the protests began in the Rif region. To this day, the area is a projection screen for anti-colonial ambitions and the right to self-determination of broad sections of the population. It was here in 1921 that a small army of resistance fighters vanquished the armed forces of the Spanish protectorate. Two years later, a short-lived autonomous, centrally-organised state was formed under the leadership of national hero Abdelkrim El-Khattabi, who is now a symbol of the current protests.

When Morocco gained independence in 1956, the new government adopted the administrative structures of the colonial regime. An identity policy "underlining the ethnic differences" between Berbers and Arabs, encouraged by the former colonial regime, was continued. Unlike the pre-colonialisation era, decision-making processes were now negotiated first and foremost between the king and the nationalist, urban and Arab elites "at the top". In this way, the political autonomy of regions such as the Rif were lost. Then too, the monarchy responded to protests with repression.

In the periphery in particular, this resulted in a structural disadvantage for the indigenous, non-Arab population, which continues to mobilise people to this day. It brought with it disproportionate poverty, high demographic pressure, the emergence of criminalised 'shadow economies' and both legal and illegal migration to Europe. In the 1960s, Germany also profited from the structural weakness and the lack of prospects in the region, specifically recruiting "guest workers" from the Rif for the German economic miracle.

Since the beginning of the 1990s, farmland and public services have increasingly been privatised as part of radical neoliberal programmes and sold to European investors. This has left the population, particularly in the periphery, in an even more precarious situation. Such developments have often had a massive impact on Morocco's natural ecosystems: fishing grounds along the coast have been plundered by European fishing companies, land has been "grabbed" and sold to foreign companies, and water and air have been polluted. 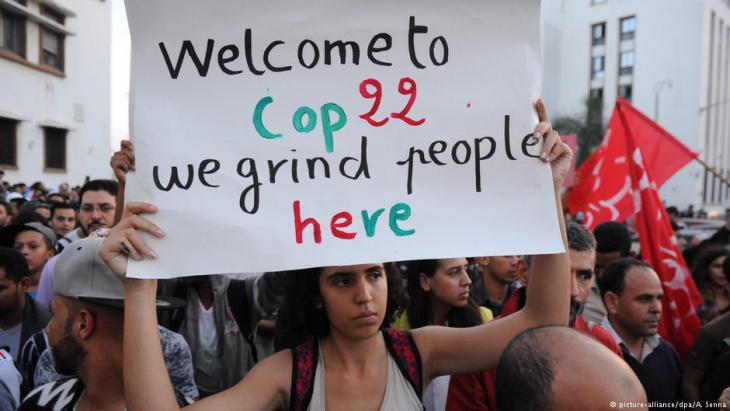 A protester in Al-Hoceima holds up a placard drawing attention to the gruesome death of fishmonger Mohsin Fikri, who was crushed to death after trying to save his catch when police officers confiscated it and threw it into a rubbish truck. His death triggered the largest series of demonstrations since those that started the Arab Spring in 2011

In Imider, a small village 300 km to the south of Marrakesh, one of the longest sit-ins in regional history is taking place in protest at this policy. Since August 2011, residents have been taking a stand against the ecological impact of the largest silver mine in Africa. The mine's huge thirst for water has drained many of the local wells needed for farming. Toxic chemicals have also found their way into the ground water, posing a threat to crops. In Imider too, there is solidarity with "Hirak El-Shaabi".

At the same time, Morocco is presenting itself to the world as an environmentally-responsible and reliable partner for the realisation of western development projects. The annual COP22 climate change summit took place in Marrakesh last November. Investments are being made in prestige projects such as the world's largest solar power plant or the nation's first green mosque. But all of this has been dismissed as "greenwashing", because the Moroccan population won't benefit in the medium term.

Amazigh women: between ethnocentrism and patriarchy

The gender dimension of the protests should not be underestimated. One of the key leading figures of the movement is Nawal Ben Aissa, who has for years supported women with cancer, especially in the rural parts of the Rif. Today, many Amazigh women live outside urban centres in isolated and structurally-weak regions without adequate access to health care and education. In most cases, they cannot read or write, speak neither Arabic nor French and are therefore not in a position to draw attention to their plight.

Although Tamazight, a dialect in its own right as well as umbrella term for the Berber dialects spoken in Morocco, was recognised as the country's second official language in 2011, the law was never properly implemented and has therefore done little to change the lives of these women. Not only do they suffer under the consequences of economic, ecological and patriarchal violence; but in a country where Arabic continues to be the norm in the public sphere, they have been entirely deprived of their political voice. "Women's groups always talk about the 'Arab woman', but we have an Amazigh culture, language and identity," says Amina Zioual, chairwoman of the organisation The Voice of the Amazigh Women.

In Morocco, Berber women find themselves at the interface of a variety of forms of discrimination and this is another reason why they feel a sense of solidarity with "Hirak El-Shaabi". When the rallies in Al-Hoceima were supposed to be led by them last month, security forces initially tried to prevent them from doing so, before violently storming and crushing the protests. 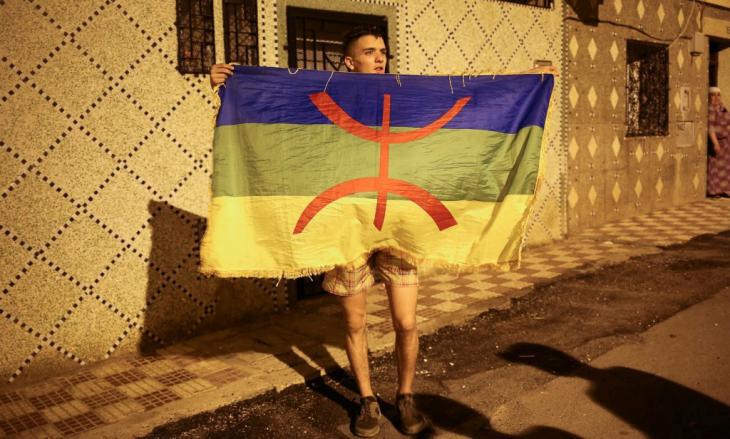 A supporter of the Moroccan Berber movement demonstrating in Rabat. To this day, many senior Moroccan politicians criticise the attempts of the Berber movement to get its concerns put on the country's political agenda. They accuse the activists of fanning the flames of ethnic tension in Morocco and trying to undermine the country's bond with the Arab Islamic community

The Hirak protests centre on both the economic and the ecological consequences of neoliberal policies and on an ethnocentric policy that corrodes regional integrity and represses local identity. Between Al-Hoceima in the North and Imider in the South, it is about democratising the periphery. It is also about interpretational sovereignty over Morocco's (post-)colonial history and about how it informs the political present.

The protests have in the meantime also reached centres of the Moroccan elite, such as Rabat and Casablanca. More than 100 leading members of the movement have been detained. At least 25 of them have been sentenced to 18 months in jail.

Many of the people who were involved in the 2011 protests against the Moroccan political system are deliberately organising themselves under a decidedly "apolitical" banner – or are at least pretending to do so. Their legitimacy does not therefore stem from a specific political programme, but first and foremost from a shared experience of protesting against the power of the state.

A law is currently being debated in Morocco that would legalise the cultivation and export of medicinal cannabis. For many small farmers, this would bring considerable advantages ... END_OF_DOCUMENT_TOKEN_TO_BE_REPLACED

Recep Tayyip Erdogan, disappointed by the European Union’s reluctance to integrate Turkey into its ranks, has re-directed his country’s diplomacy toward the Maghreb and Africa to ... END_OF_DOCUMENT_TOKEN_TO_BE_REPLACED

The rollout of coronavirus vaccines in the Middle East and North Africa is already taking place on a massive scale, with the United Arab Emirates leading the way. Nevertheless, ... END_OF_DOCUMENT_TOKEN_TO_BE_REPLACED

EU parliamentarian Dietmar Koester criticises the Union's failure to speak up when faced with human rights abuses committed by its Middle Eastern allies, while pointing out that ... END_OF_DOCUMENT_TOKEN_TO_BE_REPLACED

Even though Meryem Alaoui's debut novel "Straight from the Horse's Mouth" centres on a female character working in a field – sex work – that is often, at least in Arabic ... END_OF_DOCUMENT_TOKEN_TO_BE_REPLACED

Morocco is aiming to enshrine Judaism as part of its national identity: the "House of Memory" in Essaouira is one step towards realising that goal. The nation’s Jewish legacy has ... END_OF_DOCUMENT_TOKEN_TO_BE_REPLACED
Author:
Mohamed Lamrabet
Date:
Mail:
Send via mail

END_OF_DOCUMENT_TOKEN_TO_BE_REPLACED
Social media
and networks
Subscribe to our
newsletter