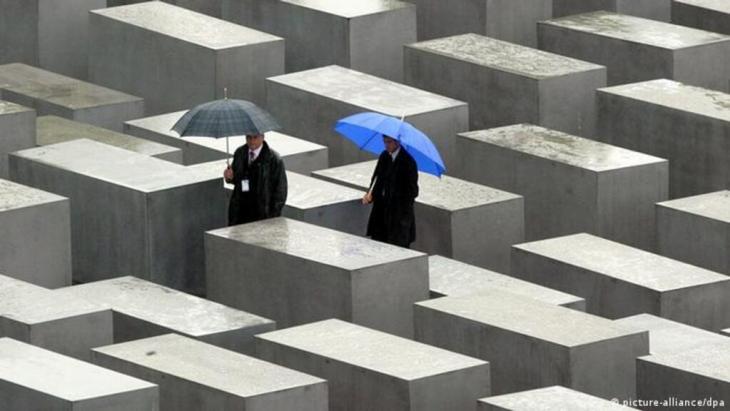 The Holocaust, colonialism and mutual understanding
Time for a refresher in humanity

It is possible to write about the Holocaust and the crimes of colonial powers without downplaying anything. In her latest book, Charlotte Wiedemann focuses on the numerous blind spots in our culture of commemoration. By Rene Wildangel

In all the clamour of recent weeks – the uproar surrounding the anti-Semitism scandal at the Documenta in Kassel is scarcely what anyone would term a debate – we could have used a bit more nuance. Instead, the art expo organisers buried their heads in the sand, while the journalist Emily Dische-Becker and the Palestinian artists involved were subjected to some vicious attempts at character assassination. "We need to talk" was the title of a planned series of discussions on anti-Semitism and the culture of commemoration that had to be cancelled due to controversies over who would be speaking from the podium. Talking is difficult these days, positions entrenched.

Charlotte Wiedemann’s book – "Den Schmerz der Anderen begreifen" (lit. 'understanding the pain of others') – is a very convincing, personal work that provides precisely this nuance, with a clever and wide-ranging look at issues seldom discussed in today’s Germany without resorting to polemic. Wiedemann’s aim is not to make a pointed, one-sided contribution to existing debates; her book is the result of genuine, decades-long engagement with the issues that stand at the centre of current controversies: colonial crimes and genocide, racism, National Socialism and the Holocaust, and how these experiences and the commemoration of these experiences relate to one another.

Wiedemann begins, however, with herself and her own life: she is a German woman born barely a decade after the Holocaust, who has also looked at her country and its history from the outside for many years as a foreign correspondent. Where others see only contradictions and will accept only one side’s view as valid, Wiedemann sees many historical interconnections: she shows the direct and indirect connections between the horror of the Nazis’ murder of European Jews and Europe’s colonial crimes. 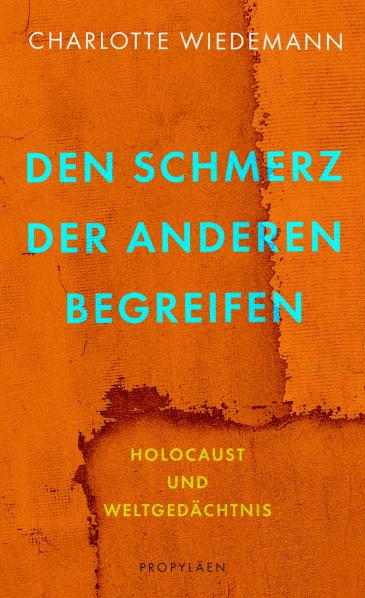 Wiedemann’s aim is not to make a pointed, one-sided contribution to existing debates; her book is the result of genuine, decades-long engagement with the issues that stand at the centre of current controversies: colonial crimes and genocide, racism, National Socialism and the Holocaust, and how these experiences and the commemoration of these experiences relate to one another

Second World War reduced to what happened in Europe

A taboo? Nothing is more tedious than the insinuation that people who, like Wiedemann, want to remember the crimes of European (including German) colonial powers in a fitting way, are diminishing the commemoration of the Holocaust or calling its historical uniqueness into question. In Charlotte Wiedemann’s work, the exact opposite is the case.

There is a direct connection between European colonialism and what we airily refer to as the Second World War, although we mostly reduce it to what happened in Europe – and Wiedemann sees a family photo from Mali as a symbol of that connection.

It shows Black soldiers in the snow, fighting for the French army against Hitler and contributing to the defeat of National Socialism. When the Wehrmacht marched into northern France, Wiedemann points out, soldiers from the Maghreb made up almost 40 percent of the French infantry. Thousands of them ended up as German prisoners-of-war, in camps where they were subject to racist humiliation, forced labour and where, in many cases, they were murdered.

When the Allies landed in the South of France in August 1944, the "Armee d'Afrique", which consisted of 120,000 colonial soldiers from Mali, Senegal and the Maghreb, formed a central component of the forces. But these troops were later systematically omitted from the commemoration of the Allied victory – the victory march in Paris, says Wiedemann, was to feature no Black faces.

Black GIs were also deployed by the USA to help liberate Europe, but the inhuman "racial segregation" that was still being practiced in their homeland meant that they were not yet in possession of their own civil rights.

In November 1944, there was a massacre by French troops in Thiaroye (Senegal), of former West African prisoners-of-war, who had dared to protest against poor treatment by the French colonial rulers. Today, where the now-forgotten massacre of colonial soldiers once took place, their descendants are getting into boats and being left to drown. "Can we imagine anything more painful than this?" Wiedemann asks.

These are the perspectives that make her book so tremendously powerful. In Ukraine today, it is self-evidently recognised that troops are defending the "freedom of the West" – but Africans who gave their lives in the Second World War for that freedom have still not received such recognition.

We think we know everything about the Second World War, Wiedemann writes – and perhaps it is this assumption that prevents us from seeing the multi-layered nature of history.

Blind spots wherever we look. The persecution of the Jewish community in the Maghreb under German occupation, but also under French and Italian control, doesn’t feature at all in the commemoration of the Holocaust. Nor does the systematic annihilation, late to be recognised, of more than five million Soviet prisoners-of-war, or the genocide against the Sinti and Roma people. In recent years, at least, a lot more research on these forgotten experiences of the 20th century’s wars has been published. But these perspectives still have not come to the attention of a broader public.

Commemoration culture is also a question of perspective

Wiedemann sees a great contradiction between German self-satisfaction at the country’s culture of commemoration on the one hand, and the ongoing silence within individual families, the many blind spots in memorialising, and the inability to adequately adapt to the reality of a multicultural and multi-ethnic society in commemorative spaces. 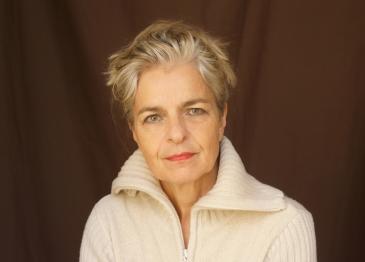 Charlotte Wiedemann deftly focuses on current debates surrounding our culture of remembrance. She complains that our collective memory is characterised by a hierarchisation of victims that not only hinders empathy, but also has fateful political consequences, as seen in the continuing refusal to take responsibility for colonial crimes. "Her book is filled with personal encounters in various parts of the world, instructive changes of perspective, and food for thought harvested from the labyrinth of commemorative cultures," writes Rene Wildangel

Who are we, and who are "the others"? Commemorative culture, too, lies in the eye of the beholder; it’s a question of perspective and standpoint. In Germany, where there was a period of general repression immediately after the war, and perpetrators were able to start new careers and continue old ones, a culture of commemoration eventually developed that centred on the singularity of the Holocaust: this is our experience of a central breakdown of civilisation.

But it was not the only breakdown of civilisation. Again and again, Wiedemann takes on other perspectives. Algerians, for example, have a completely different view of history to Germans: they are still living with the legacy of a French colonial policy of extermination, without recognition, without compensation.

And really, it should also be self-evident that in large parts of East Asia, which suffered millions of deaths under brutal occupation by Japan, people will remember the Second World War and the Holocaust differently to the way we do in Europe.

Wiedemann also points out that the new universal ethics invoked after 1945, the Nuremberg trials and the charter of the United Nations – the Universal Declaration of Human Rights – was not universal at all in its early years.

In the immediate post-war years, bloody colonial wars in various places violated human rights in the most horrific manner: in British-occupied Malaysia, in Dutch-occupied Indonesia and in French-occupied Algeria, those "crimes against humanity" that the new treaties and declarations were supposed to prevent were perpetrated on a huge scale. The newly-developed international law was not applied outside Europe, while the list of examples of double standards is still a long one even today.

Our view of massacres and genocides in the world is often just a "news bulletin" view, with the deadening effect that this entails, as a journalist like Wiedemann knows. Geographically distant victims have little currency in the empathy economy; the genocide in Cambodia for example, Wiedemann says, remains a "distant, incomprehensible, Asiatic" crime.

Our culture of commemoration remains characterised by a hierarchisation of victims that not only hinders empathy, but also has fateful political consequences: the continuing refusal to take responsibility for colonial crimes; a policy that seeks to prevent refugees – particularly from Africa – migrating to Europe; an anti-terrorism policy that in Mali only takes account of "strategically significant deaths", namely victims of terror attacks, but in Afghanistan counts the victims of U.S. drone strikes as collateral damage at most.

In her book, Wiedemann also presents a detailed discussion of what is probably the most controversial topic today: Germany’s approach to Israel, Palestine and the BDS. Although many people, as she writes in a taz article based on this chapter of her book, now prefer to draw a "no-protest zone" around everything to do with Palestine: "caution, anti-Semitism".

Palestinians face a climate of suspicion

But it was important to the author that, in an inclusive culture of commemoration, the 200,000 Palestinians living in Germany should also have an opportunity to have their voices and their experiences heard. In light of German sensitivities, they face a climate of suspicion here, although unlike many German families they have nothing to do with the guilt for the Holocaust (even if Israel’s ex-premier Netanyahu once attempted to turn the Grand Mufti of Jerusalem, who collaborated with the Nazis, into a central figure in the extermination of the Jewish people).

Wiedemann makes it clear that the Shoah and the Nakba – the expulsion of Palestinians in 1948 – are catastrophes on completely different scales. In place of lopsided comparisons, she argues for inclusive commemoration that takes account of the relationship between events. Because these two experiences are historically connected. And the disenfranchisement that the Nakba brought about continues to this day. The many Israelis, and Jewish people across the world, who speak out against it are increasingly being discredited and subjected to attacks as a result – including in the form of lectures from German guardians of the country’s culture of commemoration.

Charlotte Wiedemann keeps on probing these painful subjects, showing the hierarchisation and the exclusion inherent in "our" culture of commemoration – and never considers herself an exception to this. Wiedemann’s tone is never hectoring or superior; she is seeking answers herself. And alongside those answers, she collects questions. Her book is filled with personal encounters in various parts of the world, instructive changes of perspective, and food for thought harvested from the labyrinth of commemorative cultures. Her aim is to "sharpen our senses and our judgement, and expand our ability to empathise". In this, she has succeeded magnificently.

The history of Jews and Muslims is far more entangled than you might imagine – but you have to listen out for it. In "Recording History", Christopher Silver takes us on a sonic ... END_OF_DOCUMENT_TOKEN_TO_BE_REPLACED

Welcome to the world of Al Qasar, where Arabic music collides head-on with punk and psychedelic to create something powerful and beautiful. "Who Are We" is a raucous, subversive ... END_OF_DOCUMENT_TOKEN_TO_BE_REPLACED

The southern shores of the Mediterranean Sea are losing sand faster than almost anywhere else. The ecological and economic damage is immense. The good news is, there are ways to ... END_OF_DOCUMENT_TOKEN_TO_BE_REPLACED

To understand Islamic mysticism, we must first clear up a number of misconceptions, as Marian Brehmer writes in his essay – part 1 of a new series on Sufism END_OF_DOCUMENT_TOKEN_TO_BE_REPLACED

END_OF_DOCUMENT_TOKEN_TO_BE_REPLACED
Social media
and networks
Subscribe to our
newsletter