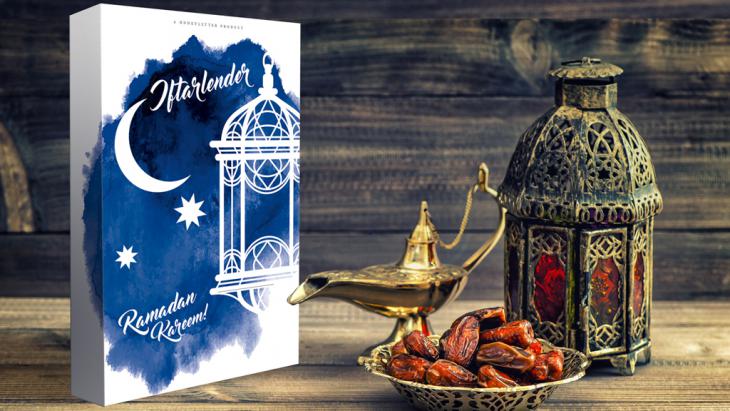 The Iftarlendar
An "Advent calendar" for Ramadan

First there was the Advent calendar. Now, with the so-called "Iftarlendar," Muslims can also prepare themselves for one of their most important holidays, the feast of Eid al-Fitr marking the end of the fast. And it only takes 30 windows. By Uta Steinwehr

"I always thought, 'Wow, how do they all manage to fast without being in a bad mood,'" says Nadia Doukali. The 44-year-old resident of Frankfurt is the inventor of the so-called "Iftarlendar", which accompanies Muslims through Ramadan to the feast marking the end of the fast. This year, the month of Ramadan ends on 4 July.

She always found it very difficult to endure not being able to eat and drink from sunrise to sunset during the Muslim period of fasting. "Especially at the start, I always kept myself busy to make it through the hours. Divine contemplation couldn′t have been further from my mind," says Nadia Doukali. "That′s why I wanted to have something to hold on to, that would accompany me through the entire month."

And thus was born the idea of the Iftarlendar. Her creation was inspired by the Advent calendar. Doukali simply transferred this feature of preparing for the most important Christian festival to the Muslim period of Ramadan.

At each Iftar, the evening meal after sunset when the daily fast is broken during Ramadan, one of the 30 windows of the calendar is opened. A word in Arabic is printed on every window, behind which is a small bar of chocolate with dates. This is to recall the precept practiced in Arab countries to break the fast with a date and a glass of milk.

"Many Muslims take part in the fast without knowing exactly why," explains Doukali. She makes the comparison with Christianity: "Not all Christians know the meaning of Easter or Pentecost." Ramadan is not only about physical hardship, but also about coming to terms with Islam. That is where she would like to begin.

Doukali feels that the Arabic words printed on the windows are not only important for Muslims, but can play a role from an ethical point of view for adherents of other religions as well. "The word serves to promote dialogue with myself, with God, with my children, my partner, my colleagues at work and also with unreligious or otherwise religious friends." 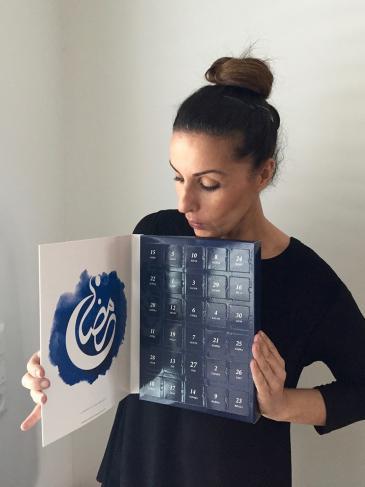 Inspired by the Christian Advent calendar: Moroccan Nadia Doukali transferred this feature of preparing for the most important Christian festival to the Muslim period of Ramadan. Her "Iftarlendar" proved so popular that it quickly sold out

The word that accompanies the fourth day is "kalam," which can be roughly translated as "word." "My aim is to reflect on using fine words," says Doukali. "What do words mean to me? How do others feel about my choice of words? How do we really communicate with each other nowadays and how should we communicate?" says Doukali, describing the key questions of the day. She instinctively chose the 30 words that appear on the windows.

Not your typical resume

Nadia Doukali can’t be easily pigeonholed. Born in Marrakesh, Morocco in 1971, she moved to Germany when she was five-years-old. A single mother of three, she initially worked as a trained secretary.  Now she writes children’s books, organises events and invents things. "For me, everything always revolves around communication and creation,″ she says, describing her working life.

She came up with the idea for the Iftarlendar around two years ago. Yet, the project took time, not because of production difficulties, but in order to find purchasers for the idea. "I offered it to two large chocolate manufacturers, but they turned me down due to the very alarming levels of Islamophobia in Germany at the time. Since then, things have settled down and people have taken a stand, also in support of refugees."

Sebastian Weigelt, an old friend, helped with the realisation of her idea. He is a product and graphic designer and, according to Doukali, the left half of her brain. A large number of the calendars were purchased by a five-star hotel where many of the guests are Muslims. Some supermarkets in Frankfurt have also included the Iftarlendar in their assortment of products.

"There is no doubt that people are curious, but it is a niche product. And it is also something that Muslims don’t yet necessarily recognise," says Doukali. She sold the rest of the Iftarlendars online, every calendar packaged separately and sent to all corners of Germany, as well as neighbouring countries.

The idea has proven popular with customers. She still gets dozens of inquiries every day as to whether there are still calendars left. Aiman Mazyek, chairman of Germany′s Central Council of Muslims, also likes the Iftarlendar. "It is a very thoughtful and good idea and we regard it as a meaningful bonus for Muslims during Ramadan," he says. It also offers children and young people a little something extra from the month of fasting.

A new edition is already being planned for the next Ramadan. "Inshallah" – God willing.

Home
Print
Newsletter
More on this topic
Ramadan for shopkeepers: Breaking the fast with dates and seafood Ramadan in Germany: A time for spiritual reflection and self-restraintQantara dossier: "Islam in Germany"
Related Topics
Islam in Germany, Islamic lifestyle, Ramadan
All Topics

Dalia Hatuqa is an experienced journalist who has reported on the Israeli-Palestinian conflict from Ramallah, Washington DC and Amman. A writer for Time Magazine, Foreign Affairs ... END_OF_DOCUMENT_TOKEN_TO_BE_REPLACED

Since President Abdul Fattah al-Sisi seized power in Egypt in 2013, he has ruled the country with an iron fist. Civil society, opposition and free press struggle to survive. Tens ... END_OF_DOCUMENT_TOKEN_TO_BE_REPLACED

Many Turks are dissatisfied with the international status of their country. At the same time, opinion polls reveal great scepticism among the Turkish population towards the USA. ... END_OF_DOCUMENT_TOKEN_TO_BE_REPLACED

The German government is planning to legalise cannabis before the end of this legislative period. So what does Islam have to say about its consumption? Will changing the law alter ... END_OF_DOCUMENT_TOKEN_TO_BE_REPLACED

END_OF_DOCUMENT_TOKEN_TO_BE_REPLACED
Social media
and networks
Subscribe to our
newsletter